'Twas the Night Before Wednesday...

AVENGERS AI #1
I didn't read past the first issue of Age of Ultron yet, I don't know most of the characters in this (and of those I do know, I only really like one of 'em) and the goofy title seems to be setting a new standard in brand dilution and I'm not terribly familiar with the work of either writer Sam Humphries or artist Andre Araujo, but I kinda don't care about any of that—This is a Marvel team book in which the whole team is comprised of robots, it's only $2.99 and I'd really like to read more superhero comics than the small handful I'm reading serially now. Oh, and there's that sweet variant cover. So I'm giving this a shot. I hope it's good.

AXE COP TP VOL 04 PRESIDENT WORLD
Hey, I'm waaaaayyyy behind on this one now. I'm really curious about what will happen to this series in the future, because it's selling point—"written by a five-year-old and illustrated by his 29-year-old brother"—has a built-in expiration point. Like, will the writer be as good when he's eight? Or 12? Or 16? 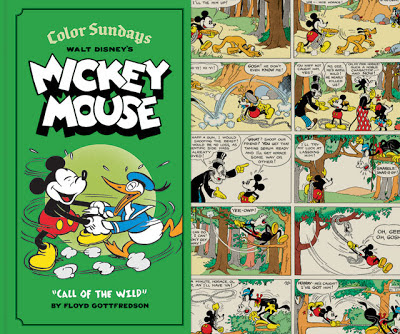 DISNEY MICKEY MOUSE COLOR SUNDAYS HC VOL 01 CALL WILD
Of Fantagraphics' two Disney reprint projects, I'm enjoying the Carl Barks library of duck comics to Floyd Gottfredson's Mickey Mouse strips (in large part because the former were comic book stories and the latter were comic strip stories, and the flow of the former reads better in large chunks than that of the latter), but I'm really curious to see what these look like in color and to see how they read when they're not part of a daily continuity (At lest, I assume most of these won't be part of the weekly continuity, but instead are standalone stories.

Plus, I love how crazy and off-model that Donald Duck on the cover looks, compared to the "final" version of the character we see most often.

PAUL JOINS THE SCOUTS GN
I love Michel Rabagliati's Paul comics. This is another one. It's coming from Conundrum Press rather than Drawn and Quartley, who published the previous Paul books I've read. Conundrum is apparently also publishing a new graphic novel by Joe Ollmann (of Mid-Life fame), with the bland title of Science Fiction. I liked that previous Ollmann book I read a whole lot, and would sure like to see what he's doing now.

PERSIA BLUES SC VOL 01
They had me at "written by Dara Naraghi." Look for a review of this by me...somewhere. Soon.

SATELLITE SAM #1 (MR)
A collaboration between Matt Fraction and Howard Chaykin has got to be interesting, whether it's any good or not. Although I imagine it will be good. Fraction writes good, right? And Chaykin draws good, right? Especially ladies' undergarments, which I see are on the cover of this comic. It's probably worth noting that this new series written by Matt Fraction, who is currently writing Hawkeye, Fantastic Four, FF and probably a few more books I'm blanking on for Marvel Entertainment, is not being published by Marvel, but is instead being published by Image Comics. So here's one more example of an established-as-you-can-get writer with a healthy relationship with one of the Big Two comics taking a new or original idea to Image Comics for publication. Seems like we've been seeing an awful lot of that lately. 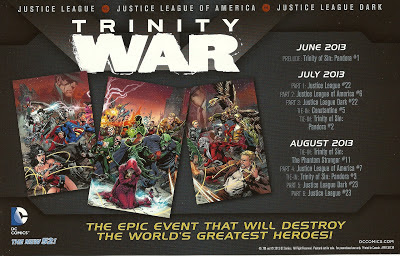 TRINITY OF SIN PANDORA #1
TRINITY OF SIN THE PHANTOM STRANGER #10
The former stars the hooded lady character from the final issue of Flashpoint, the person assigned in-story responsibility for creating "The New 52" and who DC placed in the backgrounds of all 52 #1's that were released in August and September of 2011, starring in what seems like a somewhat belated new series that has something to do with ...the state of the DC Universe, I guess...?

The Phantom Stranger comic is interesting in that its title recently changed from just plain old Phantom Stranger to Trinity of Sin The Phantom Stranger to suggest a stronger correlation to whatever important stuff is supposedly going to be goin on in Pandora and the upcoming "Trinity War" crossover story, but Pandora #1 is the prelude to "Trinity War," while ToStPS #10 doesn't make the list of tie-ins on the house ad or on this little flier from my comic shop listing all of the books that are a part of "The Epic Event That Will Destroy The World's Greatest Heroes!"
Posted by Caleb at 7:17 PM