A few of the weirdest parts of the weird one-shot Wolverine: In The Flesh #1 (which is weird). 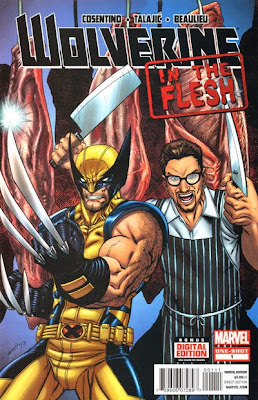 I mentioned this comic briefly last night in discussing the trade paperback All-New X-Men/Indestructible Hulk/Superior Spider-Man: The Arms of The Octopus, as for some reason completely beyond my grasp, Marvel decided to stick it in the back of the book collecting a trio of specials from each of the home books of the characters in the title, all of which told a single, inter-connected story.

I was obviously pretty surprise to see it tacked on to "Arms of The Octopus," apparently there for no reason other than to jack up the page count so Marvel would feel less guilty charging readers $15 for the trade, and, when I got to it, I put the trade down, having finished the story I wanted to read. I picked it up and read "In The Flesh" the following night though.

Wolverine: In The Flesh was a summer 2013 book, apparently originally announced back in 2011. It's drawn (exceptionally poorly) by Dalibor Talajic, with Jean-Francois Beaulieu providing the coloring, but what it is most noteworthy for is the fact that it was written by celebrity chef Chris Cosentino, who casts himself as Wolverine's friend and guest-star in the 20-page, $4 adventure.

I'm using the term "celebrity chef" because Cosentino refers to himself as such, through a different character he writes in the story. "What's a celebrity chef doing in my morgue?" says an unnamed mortician or someone from the coroner's office, when he sees the Cosentino character in the morgue. The back of the book refers to Cosentino as "TOP CHEF CHRIS COSENTINO!" A quick look at Wikipedia tells me he is a "celebrity chef and reality television personality" whose credits include Top Chef Masters, The Next Iron Chef and Iron Chef America (This explains why I've never heard of him before I heard of this comic book, as the only reality shows with which I have any familiarity are Dancing With The Stars and Finding Bigfoot, and he has not appeared on either of those...although I would love to see either of those shows crossover with the Marvel Universe).

He is also a "chef-partner" at the restaurant Incanto in San Francisco; there's a panel in which the name of the restaurant appears, but it was so poorly drawn I couldn't make out the word. This also explains how Wolverine and Cosentino might know one another, as Wolvie was based in San Fran for a while, before moving back east to found the Jean Grey School.

There's a picture of Cosentino on his Wikipedia page, and he doesn't look much like either the Cosentino that appears on the In The Flesh cover (by Tim Seeley) or the one that appears throughout the comic by Talajic, nor do Seeley's and Talajic's versions look much of anything like one another.

So, what possible occasion might there be for Wolverine to team-up with a celebrity chef and reality television personality? If you guessed something funny, guess again.

San Francisco is apparently wracked by a series of brutal murders by a serial killer known as "The Bay Area Butcher," a killer who removes the limbs and organs from his victims. The city is so worked up, that it's on the verge of rioting, we're told, and the National Guard has been put on alert just in case they do.

Wolverine, wearing street clothes as he does throughout the comic, shows up at a crime scene and asks the aforementioned mortician/coroner guy if he can help in anyway. The guy says to stop by the morgue later, and Wolvie does, but before doing so, he stops to pick up someone he thinks can help.

There's a page set at what is apparently Icanto, where Cosentino is...doing something to pig corpse...I think? ("Hey guys, I need to fabricate this pig," he says to some off-panel guys). Wolverine picks up Cosentino and takes him to the morgue to look at corpses with him, and Cosentino vomits. When the bald mortician guy asks what Cosentino's doing there, Wolverine says, "I'm the best at what I do. He's the best at what he does." Remember, that's Cosentino writing about himself!

Wolverine wants Cosentino to look at the cuts, since he knows "meat cuts like no one else." After regaining his compsure, the chef notices that the corpses look like they were butchered in a way similar to the way people like him butcher animals. Also, he notices marks that look like they came from the sort of cattle prod used at slaughterhouse. The professional medical examiner and the super-old crimefighter with super-sense somehow missed that!

They investigate the trucks, but one truck—one that has been getting rave reviews—is closed, and whoever runs it is acting suspicious. In fact, he's so suspicious, he lacks a scent, so our heroes trail him. (The Butcher, it turns out, doesn't have scent. When he's about to murder a naked lady, he soliquies about his tragic past, mentioning getting sick, losing all his hair and losing his scent.

I thought for a moment he was referring to having cancer, but does one lose one's ability to produce a scent when one has cancer? I don't know. The script never says anything more specific than "sick."

So anyway, the food truck getting rave reviews? It's totally been selling human meat. That, surprisingly, isn't much of a plot point, or even addressed directly, beyond The Butcher saying at one point that he's ready to move on from serving human meat to superior mutant meat, and he is, of course, delighted when he captures Wolverine, as Wolvie's healing factor would provide him with an endless supply.

The Butcher does indeed catch Wolverine, shocking him with the stun wand and then tying him down with...exercise bands? Dirty bandages? Packing tape? The art's not real clear on this point, but, whatever it is, it sure doesn't look like something sufficiently durable to hold Wolverine down for too long while you butcher him.

Wolverine gets caught because Cosentino decides to pack it in after an all-night stake out, but, on the drive home, has second thoughts, and returns to the abandoned building where Wolverine is held captive. He's not hard to find. 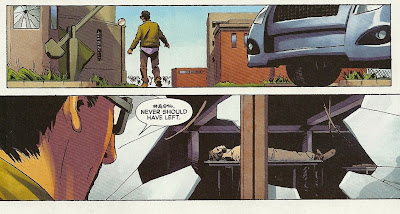 In addition to not securing him well, The Butcher doesn't do a very good job of hiding the fact that he's keeping a prisoner either. No wonder he gets taken down by a reality television personality.

So, in the climax, Cosentino unties Wolverine and almost gets in a knife fight with The Butcher, but Wolverine come sto his rescue and, after a brief but blood nine-panel fight scene, he stabs and punches out The Butcher.

On the last page, Wolverine returns to the restaurant, where he does prep work with one of his adamantium claws, since the injured Cosentino can't chop so well.

Here are the weirdest parts.

First, Cosentino seems to have a particular and strong disdain for vegetarians, which seems downright weird, considering that this is a story in which people who eat meat are tricked into eating the flesh of their fellow human beings, and raving about how good it is. You know which San Franciscans did not get tricked into cannibalism by The Butcher? Vegetarians.

I...have no idea what anything in that panel means. The mortician guy needles Cosentino for his squeamishness around dead bodies, probably a fair point given that Wolverine brought Cosentino in as an expert to examine said bodies. Cosentino angry calls him a vegetarian, for some reason, and Wolverine thinks that is funny, saying "I guess what they say about you veg-heads is true!"

What do they say about us veg-heads? And how is it true? That we smell? I honestly don't get it.

Cosentino returns once again to insult vegetarians near the end of the same scene: 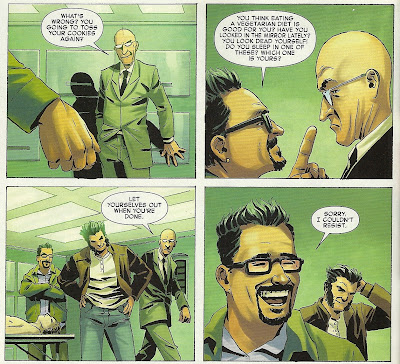 Again, I don't get it. What's the point? What's the message here? A vegetarian diet is not good for you? Is that the moral of the story? Would the mortician still have his hair if he ate fabricated pigs?

And then there's that bit at the end, in which Wolvie uses his claws not only to eat off of—something I've seen before—but to cut up some vegetables that are going to be served to other people to eat. That can't possibly be sanitary. Like, I'd say "Do you know where those claws have been?" but we all do know where those claws have been. In this story, for example, they've been in the gut of The Butcher. And in and out of God knows how many people over the years. And, when not being used to cut through walls, doors, robots, weapons, aliens, ninjas and so on, Wolverine stores them inside his own body.

Or, wait, does Wolverine's healing factor work to sanitize his claws? So that every time he SNAKTs 'em back into his arms, his healing factor kills all the germs that might be clinging to them? If so, then I guess maybe it's not such a terrible health risk to eat food prepared with Wolverine's claws. But it's still gross. And, were I passing by the kitchen window and looked upon that scene, I'd still probably place a call to the health inspector.
Posted by Caleb at 7:28 PM

The main thing that perplexes me is why a truck that served human flesh would get rave reviews. I've read actual interviews anthropologists have conducted with real cannibals. They describe humans as tasting like lean, underfed pigs.

Were the reviews praising him for using free range organic pork instead of farm-fattened pork or something?

Unfortunately, I might not by Arms of Octopus now, considering I`d also have to pay for this piece of chicken shit.

This is not the Hannibal vs. Wolverine movie I wanted, where Hannibal keeps Logan bound & drugged in his pantry and calls him "Mister Steakface".

"Would you care for some more chianti in your water bowl, Mister Steakface?"

I'm more used to hearing that vegetarians smell better than their meat-eating counterparts... In California (where this story takes place0, this was taken as gospel.