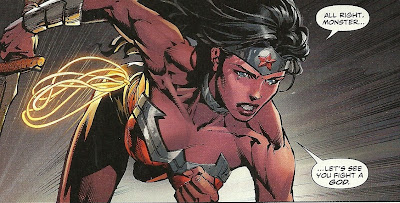 It's the third issue Meredith and David Finch's still new-ish run on Wonder Woman, continuing their "War-Torn" story arc, in which the titular heroine finds herself increasingly overwhelmed by her many duties. The last issue ended with Wonder Woman flying off to help the Justice League just as her fellow Amazons (and subjects, now that she's their queen) were complaining to her about the fact that she's always flying off to help the Justice League instead of them.

And some alien bug-people were plotting something, maybe.

And the evil queen from Snow White and some co-conspirators cooked a naked Donna Troy in a pot.

All of which naturally leads us to this, I guess. The previous two cover penciled by David Finch have been pretty bad, but this one? This one is just the worst. DC even moved the logo to the side of the book to better accommodate the drawing, but they might have been better off lowering the figure to hide her legs and keep the logo atop the page, just above Wonder Woman's horned helm.

So this is Wonder Woman in her God of War get-up, a title she assumed from War/Ares in the pages of the previous run of the New 52 Wonder Woman. At least, the horned helm and cape are part of the War garb; I'm not so sure about Finch's other touches, such as putting a WW tiara-esque band around the front of the helm, and the more battle-ready, heavily accessorized version of Wonder Woman's costume.

What is probably most notable about this image is Wonder Woman's blood-splattered cleavage, which I always find to be a pretty perfect metaphor for the target audience of modern mainstream super-comics, and the bloody sword she's holding between her legs, like a surrogate erection.

The closer one looks at the image, however, the worse it becomes. Wonder Woman is not merely crouching down in a fighting stance, sword held at the ready. Look closer at her right leg (on your left). Her foot is visible. Wonder Woman is either running awkwardly at the reader, or maybe jumping, or even flying at the reader. The background is a pretty dark, clumsy attempt at action lines, furthering the effect that Wonder Woman is moving fast at the reader, despite the fact that nothing about her figure suggests that that is the case. Little bubbling clouds of blood appear in her wake.

This is a four-panel page, which is about average for a Finch/Finch production (there's one eight-panel page, one seven-panel page, and the rest tend to be between two and four panels...the ones that aren't just splash images, or half of a two-page splashes, anyway). It opens with a close up of beautiful woman wearing bits and bobs of armor and other Bronze Age signifiers.

She stares with off into the distance with lifeless, vacant eyes, which means she is either dead, or David Finch drew her, or both.

As the "camera" pulls back, we see that she is indeed dead, and a black Amazon with braids in her hair shouts orders as she runs over this dead Amazon, and some other dead Amazons.

"We'll cover you as long as we can!" she screams in a red-ringed dialogue bubble, pointing her sword off-panel at an unseen adversary. 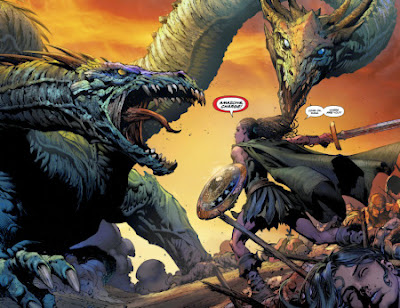 We see the adversary, presented in a two-page, space-wasting splash that, despite all the space it takes up, still fails to reveal much of the giant monster that is its supposed focus.

It is apparently a two-head dragon of some kind, although Finch doesn't really do anything resembling an establishing shot here, so we only see its heads and forelimbs. Maybe he would have needed a four-page, fold-out splash panel in order to draw a whole dragon...?

Wonder Woman appears for the first time in her book, standing in the background of a panel saying Wha...?. She runs around for a few pages, frantically asking people where Dessa is, and being told off by various wounded Amazons, who say things like, "Do I look like I have time to answer your questions?" and "The injured are too numerous...we dont' have time to remember names."

Wonder Woman finally finds Dessa, the black Amazon with the braids who charged the two-headed dragon, dying on the ground. Her last words are ones castigating Wonder Woman for not being there to help them.

After an what must have been a simply exhausting to draw three straight pages with panels on them, we get a splash page. This one is of Wonder Woman posing over Dessa's body, looking off into the distance and swearing to kill the dragon that killed her fellow Amazons.

Sword in hand, tear in eye, Wonder Woman flies toward the dragon (see the panel atop this post), which we finally see a full body shot of on page page 8, and is about to attack it when it suddenly bows down before her. Out from somewhere between its necks walks another Wonder Woman, this one dressed like the one on the cover. She tells the first Wonder Woman off, yelling at her about the same basic things the Amazons are all pissed off at her about, and then this Bad Wonder Woman draws a sword and raises it to strike down Good Wonder Woman, who merely turns her head and raises her hands as if to ward off the blow.

Wonder Woman awakes screaming in her bed. Oh, it was all a dream! A ten-page dream sequence, filling the entire first half of the book. Awesome.

Wonder Woman is covered in blood. 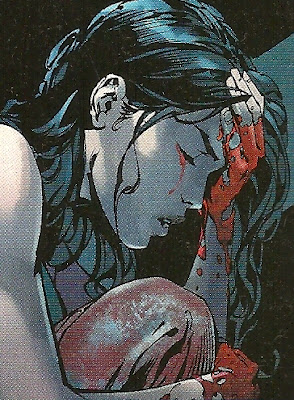 Her hands are positively dripping with it, and her bedsheet looks like a Jackson Pollack painting. No idea where all that blood came from, but I am refraining from making any sort of joke that may be miscontrued as misogynist.

I guess it's possible she was slaughtering cattle or something all day, and was so exhausted she didn't have time to wash up before bed...?

Meanwhile, Discord from the previous, Brian Azzarello-written, mostly Cliff Chiang-drawn run on the series is shown watching Wonder Woman via a scrying pool.

Donna Troy silently suits up, while the witch lady gives her a pep talk.

Wonder Woman, now in civilian garb, meets her friend for coffee in London. Her friend is Hessia, the former Amazon living in man's world that I believe was introduced in the first arc of Superman/Wonder Woman, in order to give Diana someone to talk to. They discuss Diana's commitment problems with the Amazons, and whether being the God of War will have any sort of negative impact on Diana's life. At one point, Diana bites off Hessia's head, shouting, "I'M NOTHING LIKE ARES!"

If nothing else, being the God of War is making Diana pretty moody.

Wonder Woman's intense coffee talk is broken up by a call from Justice League receptionist Cyborg. Another village disappeared. Remember, this started happening in "War-Torn" part one; that's the reason why Diana tried kicking off Swamp Thing's head and then beating him to death. Because he was at the scene of one such disappearance.

Here, the village seems to have been swallowed up by a volcano? Or it was atop a mountain that became a volcano? I don't really get it. Superman straps a camera and head lamp and other equipment on and descends into the volcano, while Wonder Woman sits next to Batman in the Bat-plane and has a pretty similar conversation to the one she had with Aquaman in Wonder Woman #36. 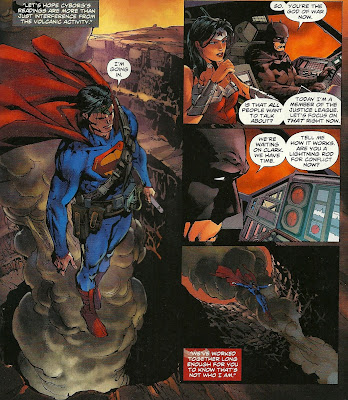 Underground, Superman encounters sone sort of gate with runes on it, and then some bugs that knock out his camera.

The wicked witch Amazon, Derinoe, addresses the Amazonian leadership council about the same old "Wonder Woman's never here" bullshit, and, after a little bit of debate that comes down to Dessa versus everyone else, one of the councilmembers tells Derinoe to "bring forth your perfect Amazon, that we might judge her worthiness for ourselves." 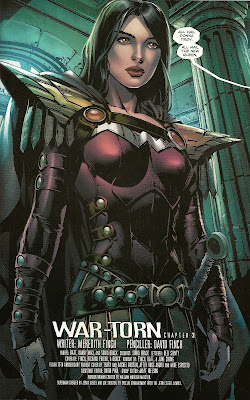 Surprise! It's Donna Troy! This is the book's second full-page splash; coupled with the two-page splash, that means 1/5th of this single issue was devoted to just three panels.

"All hail Donna Troy," Derinoe says from off-panel, "All hail the new queen."

Is Donna Troy an Amazon name? "Donna" doesn't sound very Amazonian to me...
Posted by Caleb at 6:11 PM

As much as you seem to despise it, I'm enjoying the hell out of these page-by-page breakdowns.

I am so very very glad that I dropped this kidney stone of a book after the first issue!

Yeah, I think I'm done with this once Convergence puts it on hiatus. Too much "nothing" going on.

But I was one of those who thought the previous run was one of the high-marks in WW books of all time, so it's not surprising this complete shift in tone isn't appealing to me.

David Finch produces some of the most pointless artwork I've ever seen. Never a compelling composition. Never a memorable frame. In his entire career I can think of probably one image that sticks in my head; from that terrible Moon Knight book he worked on several years ago.
Yet he keeps getting high-profile gigs.

Exterior factors have determined whether or not I'll review these issues. That is, as long as I keep getting them without having to pay for them, I don't mind reading 'em and writing about 'em.

I actually wondered the same thing, since his super-senses shouldn't make seeing in the dark much of a challenge for him. I decided the lamp must be for Wonder Woman and Batman's benefit, as he's recording what's down there for them to see on the Bat-plan TV.

Now, how those big, scary bugs snuck up on the guy with super-sense, that I can't guess.