On a couple of Earths of interest:

The only new comic released today that I've read so far this week is The Multiversity: Guidebook #1, which was a huge surprise in that it contained a story just a few pages shorter than those of the other Multiversity books, contained some 35 extra pages detailing the Map of the Multiverse and these little profiles of 45 of the 52 Earths (seven of them are "Unknown" Earths at this point.

These were surprisingly fun, in large part because of how familiar so many of them were, and that the editors seemed to do a pretty decent job of at least making an attempt to match the settings and characters in each entry with the artist most associated with them. 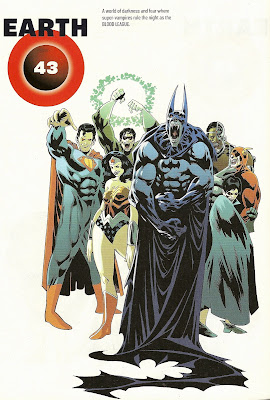 So, for example, the Vampire Earth derived from Doug Moench/Kelley Jones trilogy of Vampire Batman books is drawn by Kelley Jones (I guess one reason Superman should wear shorts is to give Jones a good idea where to start and stop with his leg muscles). 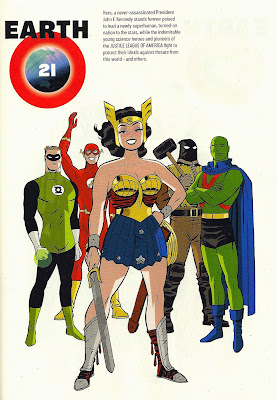 Or, for another example, Darwyn Cooke draws the Earth assigned to his New Fronteir.

The Earth I was probably most surprised to see was Earth-1: 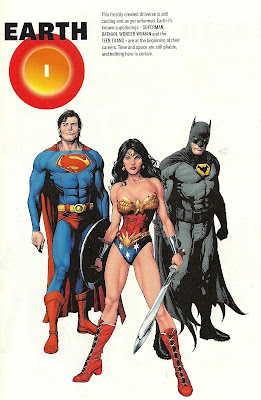 So I guess that explains why those Earth One original graphic novels are all sub-titled "Earth One"—it is the universe within the current iteration of The Multiverse on which they take place. As for the main DCU, the Earth I've been calling "Earth-New 52"...? That's Earth-0, or "New Earth," as it was called post-Identity Crisis.

The entry, illustrated by Batman: Earth One artist Gary Frank, explicitly notes that the various characters all exist in the same world (There's been no indication in the books published so far that this was the case, and all three seemed to stand alone and divorced form one another). Also of interest is the inclusion of Wonder Woman, in the text and in the illustration, as she hasn't been introduced yet. It was announced that Greg Rucka would be working on a Wonder Woman: Earth One book, and then it was announced that Morrison would be doing it instead, but the title of Morrison's original graphic novel about Wonder Woman has since changed its title, losing the "Earth One" sub-title and, one assumes, its designation within the line and, one also assumes, its setting on this Earth. But one shouldn't really assume anything, should one? I, for example, assumed those books were not set on a new Earth-1 (Is it of interest that the parallel worlds that the main DCU of Earth-0 have had the most interaction with so far have been Earth-2 and Earth-3, rather than their closest neighbor, Earth-1...?)
Posted by Caleb at 10:38 PM

I was amused that the the Just Imagine Stan Lee universe was directly opposite of the Earth-51 universe where Jack Kirby's creations ended up at the end of Final Crisis. And that Earth-51 was as close to New Genesis as Earth-6 was to Apokolips. (A commentary on the creativity of the two "worlds" perhaps?)

I agree on how fun this guidebook issue of Multiversity is. Terrific art and lots of connections and possibilities to explore. Just as Jer mentioned with his examples of Earth-51 & Earth-6, the way the worlds are organized and presented contains a lot of unspoken commentary.

A little detail that caught my attention was the Atlas/Timely/Marvel world of Earth-8. I'm trying to figure out why its logo was intentionally made to look like one of DC's outdated logos.

And I noticed in lieu of an Allen Moore-created Watchmen earth, Morrison went back to the original Watchmen source material of the Charton Comics heroes for Earth-4. I bet there were some interesting deliberations behind that decision.

This Multiversity Guidebook is a source of art and info that I will be reading over and over as the series continues. Great stuff.