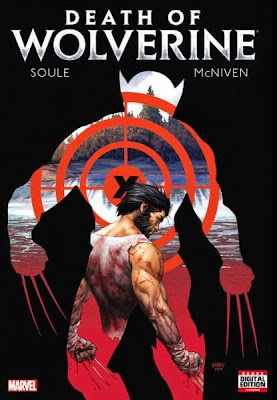 Obviously there's a lot of outside calculus that goes into something like the decision to kill off a character as long-lived and popular as Wolverine. The most popular of the X-Men might not be the sales juggernaut he was at other points in his fictional history, and his solo title might have been getting regularly outsold by those of surprising upstart characters, but Wolverine is still a pretty Big Deal. Killing him off, even only extremely temporarily, as every single person who heard he was going to die immediately thought, would therefore necessarily be a pretty big event, with some pretty big knock-on events throughout the Marvel Universe...or at least their X-Men line, as over the past few years Wolverine has been elevated to the position of Charles Xavier's official, if unlikely, successor.

That said, the comic book in which Wolverine actually dies is pretty small, and it feels more tossed-off than epic. The event occurred in a four-issue miniseries entitled, quite straightforwardly, Death of Wolverine.

It was written by Charles Soule, a prolific and talented writer, albeit one with no real history with the character. (Paul Cornell, who was writing the Wolverine series up until it was canceled to make room for this book, and who started the ball rolling towards killing off Wolverine, would have been the natural choice. Jason Aaron might have made more sense still, given that he had been writing the character through a succession of titles—Wolverine: Weapon X, Wolverine, Wolverine and The X-Men, etc—and is probably the writer most closely associated with him at the moment. Len Wein, the character's co-creator, and Chris Claremont, who all but re-created and popularized him, would have also been slam-dunk choices).

It was drawn by Steve McNiven, who previously drew the character in the Mark Millar-written series Old Man Logan. (As with Soule, McNiven probably wasn't anyone's first choice for drawing the ultimate Wolverine story, but he still has plenty of stature, thanks to his work on Civil War, so having him draw the book did invest it with at least a sense of occasion.)

Marvel's packaging of the book was certainly meant to convey that they felt it was going to be something special—or, at least, that they wanted readers and retailers to consider it such. Each issue cost $5, even though each issue's page count was only between 21 and 23 pages (back matter of dubious quality followed each serially published chapter). There were 40 covers for the four issues—40!—averaging out to about 10 per issue.

But 80 or so pages does not an epic make, and this reads like a fairly generic Wolverine story arc with a cliffhanger ending—his death doesn't even really look too terribly final, to be honest. It appears as if Soule simply did the best he could, including as many Wolverine villains and locations as possible, while keeping the character-count, the locations and, most importantly, the page-count as low as possible.

Death of Wolverine reads like what it is then: Soule and McNiven's response to being tasked with an assignment of doing a four-issue comic in which Wolverine seems to die.

In the early pages of the first issue, we get the premise: Wolverine's healing factor no longer works, making him truly, easily kill-able for the first time in a long time. The more he fights, the more often he uses his claws, the more likely he is to die in action. This is told to the reader by Reed "Mister Fantastic" Richards, who Soule has telling it to Wolverine, apparently urging him to take some time off from Wolverine-ing.

The stubborn Logan knows he can't, however, as once word gets out that he doesn't have his healing factor anymore, villains will come out of the woodwork for him (As to what happened to his healing factor, it's never mentioned in this book at all, and I suppose it's not ultimately important. I believe microscopic aliens somehow turned it off near the end of Cornell's first story arc). This is patently silly, of course, in no small part because it's Mister Fantastic telling him to lie low while they work out a way to turn his healing factor back on, and Wolverine doesn't take him up on it. Between his pals on The Avengers, The X-Men and, apparently, The Fantastic Four, finding a good place to stash Wolverine and keep him pretty well protected shouldn't really be a problem.

Wolverine's home is a heavily fortified and protected mansion full of superheroes that rests on a sentient patch of land that eats trespassers. He's also on another superhero team with guys like Thor, Captain Universe and Hyperion, the latter of whose powers are basically, "Like Superman's, but maybe more." If Wolvie really wanted to stay safe, he shouldn't have much problem doing so.

And this is one of the strange sources of tension in the book. One has to suspend one's disbelief, particularly regarding certain aspects of the shared-universe setting, when reading about characters' solo adventures, but, well, this book includes frequent references to Wolverine's place in the Marvel Universe. He's talking to Mister Fantastic, and mentions having already gone to Tony Stark and Hank McCoy with his healing factor problem. Later he borrows a piece of Iron Man's armor to use as bait, and gets an assist from Kitty Pryde.

It's therefore especially weird when he goes off on what he knows is likely a suicide mission in the book's final issue, rather than bring The X-Men, or The Avengers, or The Uncanny Avengers, or any combination of the above with him. Hell, he probably could have just stayed home and sent one of those teams there in his place.

But anyway, after Mister Fantastic explains the plot to us, Wolverine retires to an island near British Columbia to kill the various bounty hunters that come looking for him, the toughest of which is Nuke. He headbutts part of Nuke's face off (?), and gets his first clue that takes him on a trail to his death.

Next stop? Madrippor, where he goes undercover in a tuxedo (but no eye patch), and fights Viper, Sabertooth (who plays an oddly minor role, given his history with Wolverine) and Lady Deathstrike (ditto). Kitty saves him, and they go off to Japan to fight Ogun and, finally, to a Weapon X lab, to face the ultimate villain. Some guy named Cornelius, who has been collecting adamantium and put a contract out on Wolverine to be taken alive, because he wants Wolverine's healing factor.

His plan makes a bit of symoblic sense, in that he feels guilt for helping create the feral killing machine that is Wolverine and wants to atone by building real heroes out of his guinea pig/victims, adamantium and Wolvie's healing factor.

It obviously doesn't work out—Wolvie's lost his healing factor for one, which sort of contradicts Wolverine's earlier prediction that knowledge of his weakness would be what draws villains to him—and Wolverine proves he's become a hero by saving the helpless victims bound to operating tables by clawing open a molten adamantium vat before the metal could be pumped into them.

In the process, he becomes covered in the stuff, but still manages to not-die long enough to chase down Cornelius and kill him. The end.

And that's how the un-killable Wolverine finally dies: He's encased in molten adamantium, which apparently didn't burn him alive instantly or slide off his body, but instead dried like cement over him? And, of course, if his healing factor got turned back on during the process, then he would still be alive in there, just trapped and essentially buried alive. Or, if the means to turn his healing factor back on are arrived at later, then the adamantium casing he's in might be perfectly preserving his body, for an easy resurrection. Or, simplest of all, Marvel is apparently headed toward a Crisis-like reboot, so Wolverine could just be rebooted back to life.

Whatever happens after Wolverine's death, the story of his death was more than a little underwhelming. It doesn't really stand up as a dramatically satisfying story on its own for several reasons—the off-panel de-powering, the out-of-left-field random villain—and it seems a small, uninspired story arc, paling next to so many of the big, dramatic stories that have starred or prominently featured Wolverine over the years. Given how many times that guy has been extremely near death, this death, even if it's more of a "death" than a death, seemed dull, even prosaic.

The collection gets an oversized hardcover and a ton of back-matter, including all of those covers and an interview with Wein, as well as process material, but there's so much of it that it only makes the story seem smaller. It's a fairly slim book, but the 80-ish pages are followed by 40-ish pages of extras. In other words, about 1/3 of this collection is not comics, which is an awful lot of pages to not be comics in a $25 dollar book (Doing the math, as over-priced as the serially-published comic book-comics were, they were still a better investment than this, which would break down to more than $6-per-issue. Jeez, when exactly did comic books become the hobby of kings?)

With 40 covers, some of them were bound to be good!

Skottie Young's, in which Wolvie's soul ascends to heaven, looking quite surly about the whole affair: 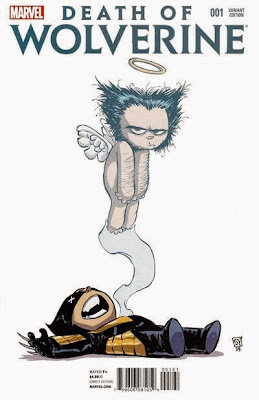 Based on the look on his face, he doesn't seem to think he's really dead either. 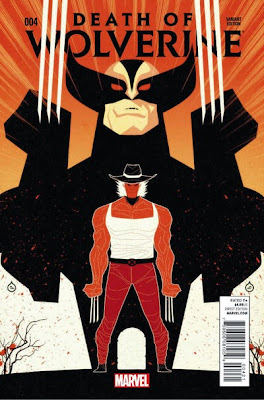 I really like the implied action generated by the arms in different positions on the two figures, as if raising his claws transforms Logan to Wolverine, and lowering them does the opposite, as well as the contrasting colors in the two versions of the character on the image.

I also kind of like the implied costume on the shadow Wolverine in the back. The (almost) all black look is a good one.
Posted by Caleb at 8:53 PM

The entire convoluted story is worth it, just for that Skottie Young cover.

I've noticed that a lot of Marvel hardcover collections are worse values than buying the individual comics at full price. I'm not sure who those collection are for. Is there really anyone who cares enough about All New X-Men to shell out $25, but not enough to do a little research and notice that they can get the original comics for $20?