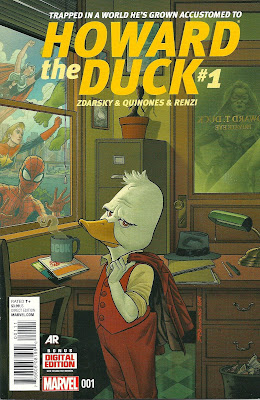 There are going to be inherent levels of wrongness involved in any Howard the Duck comic, perhaps even more so than in most other characters with creator vs. company legal issues and hard feelings in their past, on account of those conflicts involving the character being fresher than those of, say, the first generation of Marvel characters.

The level of that wrongness a reader feels will likely depend on the reader, of course. If you were around and reading comics in the 1970s, then you'll be familiar with writer Steve Gerber and artist Val Mayerik's introduction of the character, the character's meteoric rise to fame (there's a reason the character was the first one to make the jump from Marvel comic book to silver screen by a a dozen years) and the ensuing clashes over creative control between the late Gerber and Marvel. In fact, you probably lived through parts of it, seeing the results or reading the coverage of it. For you, Marvel Howard The Duck comics likely seem wrongest.

If you've just heard about all of that well after the fact, then new Howard The Duck comics are still going to feel somewhat wrong, but likely less so.

And, of course, if you've never heard of Gerber, Marvel and The Duck's contentious history, and are only familiar with the character for his rather random, weird-ass appearances in oddball Marvel Comics (Marvel Zombies 5, Marvel Zombies Destroy, Fear Itself: Fearsome Four) and his brief after-the-credits cameo in Guardians of The Galaxy, then perfect! Has Marvel got a comic for you! In fact, you may be able to enjoy Howard The Duck #1 completely guilt-free, and without wondering if you should off-set your purchase with a donation to the Hero Initiative or a comics charity of some sort (Sure, go ahead and do so! Never hurts to donate $3.99 to the Hero Initiative).

So Howard the Duck #1 is really a bad news, good news sort of comic book. Yes, it will feel weird and slightly wrong for a lot of readers and potential readers that such a book even exists (Asking if the world needed more Howard The Duck comics, by the way, is a sucker's game; The Big Two are kinda sorta built on continuing to publish comics that the world doesn't really need, but portions of it want).

On the other hand, if a Howard The Duck comic must exist—and given Marvel's business model, it must exist eventually—then you couldn't really ask for a stronger creative team, nor a better comic. And it's nice to see a "created by" credit and that the creators aren't doing anything even approaching a Gerber pastiche. This is, instead, a misanthropic, down-on-his-luck talking duck in an pure comedic version of the Marvel Universe. Like, up to his shoulders in the Marvel Universe. In this issue, the first 20-pages of the series, there are substantial appearances by Spider-Man, Black Cat, Rocket Raccoon, She-Hulk and the supporting cast of her just-canceled series (Shulkie and Howard have offices in the same building).

The comic is the work of writer Chip Zdarsky, probably currently best known as the artist of Image Comics' irreverent Sex Criminals, and artist Joe Quinones, a major talent well-deserving of a high-profile, monthly showcase like this (If not higher-profile, but hey, this is good for now).

Quinones' style is pretty straight, meaning his Spider-Man and She-Hulk look like the ones that would appear in their own comics, his "sets" and "extras" are those of the "real" Marvel Universe, not some warped version of it. That is, Quinones isn't trying to draw "funny." (Did I use too many quote marks in that paragraph? I think I did. Imagine how annoying it would be to actually be talking to me right now, instead of reading this post; I'd be air-quoting, like, constantly.)

That sets up the important clash between appearance and content that powers the book's comedy. The delivery is deadpan, so no matter how over-the-top the gag might be—the training montage, for example, or Howard's "receptionist"—they never feel forced, but just scroll by. 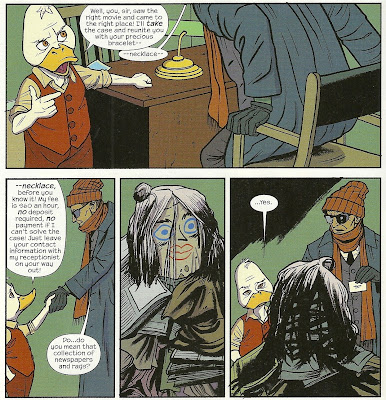 And there are a lot of gags in this book, which is actually a rather dense read—always welcome these days, when Marvel charges $3.99 for 20-pages of ad-filled comics. Character humor, fishduck-out-of-water humor, minor visual gags, snappy dialogue, making fun of Spider-Man*...few panels go by without a joke of some kind, and those that do are usually preceded and followed by one with a joke.

As for the plot, it involves Howard having set up a new business venture. In the past, oh, decade or so he's been a lawyer, a member of the Fifty-State Initiative an an agent of ARMOR (the Alternate Reality Monitoring and Operational Response, created for the Marvel Zombies franchise). Now he's a private investigator, and not a terribly successful one (This issue opens and closes with him in jail cells). He meets a pretty nice human lady who owns a tattoo parlor he makes his unofficial partner, he takes a case retrieving a stolen piece of jewelry from The Black Cat** and he gets collected by an agent of The Collector.

But as to the pressing question regarding a new Howard The Duck series, the answer is, I'm sad to say, yes, yes he still wears pants. You may recall—if you're one of those readers for whom there's a level of wrongness about the book—that Howard originally looked like Donald Duck, only in 1950s businessman's attire instead of a sailor suit.

That was, in fact, the joke from which the character sprung. He was another kind of comic book character wandering into an entirely different kind of a comic, from classic funny animal comics to mainstream horror comics. He looked so much like a Disney duck, however, that his appearance lead to the other controversy involving the character, the end result of which Howard had to wear pants and have his head rearranged, pupil to bill, until he looked less like a cartoon duck and more like a real duck...or at least the movie version of himself.

Those of us who thought that a positive aspect of Disney buying Marvel might be that Howard The Duck could finally take off his pants and assume a form closer to his original, well, those hopes are now rather thoroughly dashed.

This Howard still looks somewhat wrong then—to me, at least—but then I suppose that too has a benefit, further distancing the title from the previous, original run, and thus any aura of pastiche.

Like every other aspect of the book, then, it's wrong done right.

*Spider-Man's a good example of the variety of humor in this comic. When we first meet him, he's playing with an old gadget of his, the one that shoots a sort of Spider-Man's Face-signal from his belt, and cracking jokes, as is a thing that Spider-Man often does. When we see him later, he's breaking down and sobbing about Uncle Ben, when he thinks his own selfishness might have resulted in Howard's death. So, you know, you get normal, funny Spidey and you get Zdarksy taking the piss out of the character, by making fun of his emotional trauma regarding his dead uncle.

**She's first misidentified as "The Cat-Woman" and, oddly enough, her own status quo seems to mirror the recent status quo shift that DC's Catwoman has undergone. While Catwoman set herself up as the boss of Gotham City's organized criminal element, Felicia Hardy is apparently trying to be more of a Kingpin of Crime sort, Spider-Man says, then The Black Cat who flirts with the city's premier superhero and, while technically a thief and villain, still has a heart of gold.
Posted by Caleb at 2:27 PM

Gosh, it was a fun issue. I like fun!

My problem with any recent portrayal of Howard is that they make him look so much like the original movie character (big round head and pointier bill) that it's distracting. Yes, I'm an old fart and (That said, the book was funny enough that'll I'll stick around for another few issues...)

It's like when Marvel did a complete 180 on their depiction of Dracula. The blond, long-haired version just doesn't say "Dracula" to me at all.


It's almost like Marvel wants to erase Gene Colan's work/character design from their history. And that's sad to me...