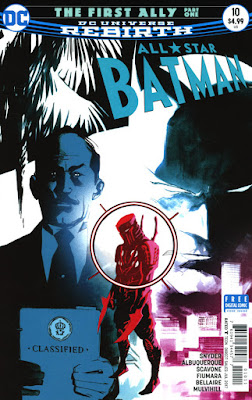 All-Star Batman #10 (DC Comics) I was so surprised to find that this issue's back-up feature did not address the bizarre, cliffhanger ending of the Duke-starring story in the previous issue that I worried I might have somehow accidentally missed an issue of All-Star, and went back to check. It turns out, I did not miss an issue, and the last panel of last issue's back-up did say it would be continued in Dark Days: The Forge. Still, it was very weird to get to the back-up only to find a story written by Rafael Albuquerque and Rafael Scavone rather than Scott Snyder, and starring Batman rather than Duke.

This issue starts a new story arc, "The First Ally," and has writer Scott Snyder joined by a new all-star artist, Rafael Albuquerque. A sizable thread of the first chapter of "The First Ally" is told through Alfred's narration, so much so that the twist ending to the "before" segment isn't much of a surprise even if you didn't see it coming. In the present, Batman is tangling with Hush, who I'm fairly certain we've only seen briefly in the pages of Batman Eternal since the New 52boot. There's not a whole hell of a lot to him here--indeed, he's a character that lost a lot of cache once the original "Hush" story arc is stripped out of continuity, in the same way that Bane is with "Knightfall" and his other first few appearances no longer canonical--but Snyder has fun with the fact that Hush has given himself plastic surgery to exactly resemble Bruce Wayne (um, the circumstances that lead to that were also knocked out of continuity, but whatever). Essentially, it allows Batman to go undercover as someone who was masquerading as him.

Albuquerque's art, which he both pencils and inks while Jordie Bellaire colors, is fine, achieving the same basic baseline strength it always does. It's better than Jock's, not as distinct as John Roimta Jr's, and, in all cases, not as fresh, new or surprising when applied to Batman as theirs was; Albuquerque has been drawing for DC long enough over so many years that his presence here isn't thrilling either because of his stature or his style. (Er, I realize that sounds pretty negative; I really like Albuquerque's work, I would simply prefer to see more out-of-the-box choices on this book, if the whole idea is to draft artists for just a single Batman story arc with Snyder.)

The back-up is not drawn by Albuquerque, but by Sebastian Fiumara, as colored by Tish Mulvihill. It's an interesting artistic choice, as Fiumara's work looks enough like Albuquerque's that if you flipped through the issue quickly, you might not even notice the change. But if you read the issue,s it's quite distinct. The story "Killers-In-Law," involves Batman going undercover as a Russian brawler, traveling from Gotham to Moscow in the hopes of stopping a weapons shipment. We don't get to see Fiumara's Batman then, just a lot of drawings of shirtless men punching each other in a warehouse, and a panel featuring an attractive alt girl. 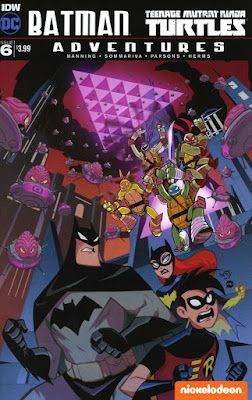 Batman/Teenage Mutant Ninja Turtles Adventures #6 (IDW Publishing) This is the completely frivolous final issue of Matthe K. Manning, Jon Sommariva and Sean Parsons' crossovers of the versions of the characters from Batman: The Animated Series and Teenage Mutant Ninja Turtles (2012). The story actually wrapped up last issue, so this is really more of an epilogue, and seemingly only exists to include the TAS redesigns, and to squeeze some Kraang in, I guess.

That's really all there is to this issue: The Kraang invade Gotham City, and the Turtles show up to help Batman, Batgirl, Robin and Nightwing stop them. And that's it, basically. I liked the bits involving Michaelangelo's reaction to the changing of the Robins (at this point in TAS, Tim Drake had become Robin, while Dick had adopted the name Nightwing). As the Turtles leaves, Batman says "until next time," and I imagine there will be a next time.

Although as long as it's not a crossover involving the 1980s/'90s movie versions of the franchises, I'm sure it will be interesting.

If there is a third one, I do hope that will be the one where they round up a bunch of classic Batman and Turtles artists to draw sections of it. I can't be the only one who wants to see Ninja Turtles drawn by Jim Balent, Kelley Jones, Graham Nolan, Tim Sale, Damion Scott and so on, and Batman and company drawn by Kevin Eastman (for more than a cover, anyway), A.C. Farley, Michael Dooney, Jim Lawson, Eric Talbot, Michael Zulli (again) and so on... 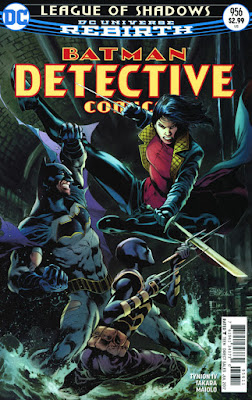 That's the thought that was rattling around my head the entire time I read this issue, which concludes the "League of Shadows" story arc, an incredibly disappointing arc made all the more disappointing by this final chapter, which is resolved via a semi-deus ex machina event that seems weirdly out-of-character for all of the participants. It's followed immediately by Batman agreeing to let his mortal enemey Ra's al Ghul take all of the League of Shadows hostage, take the corpse of Lady Shiva and defuse a nuclear bomb for him. If I was sick of seeing Ra's before this story even started, lackluster stories featuring the character don't do much to change that (this Batman vs. Ra's conflict was so much weaker than the one it overlapped in time with, from the pages of All-Star Batman, where Ra's at least had an unusual plan to take over and/or destroy parts of the world, and Batman had a unique plan to stop him. Here Batman and his allies are more or less beside the point of the League of Shadows vs. League of Assassins vs. The Colony conflict).

The main reason I tried the book out and stuck with it was that I liked the characters Tim Drake, Stephanie Brown and Cassandra Cain. Two of those three have been (temporarily) written out of the book, and the third has been written so poorly, man, I just don't know...

I liked the way Marcio Takara's art a bit better this time around, although the action is still incredibly disappointing. I liked Kate's tuxedo on the last page, though...! 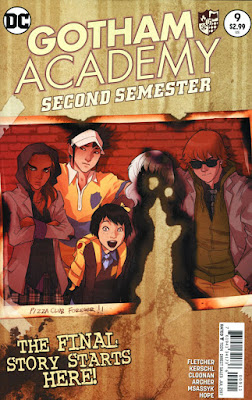 Gotham Academy: Second Semester #9 (DC) The possessed Olive Silverlock is loose in Gotham, using her pyrokinetic powers to exact revenge on the city's longest-lived families. Here she goes after the last of the Dents, and Adam Archer, "MSASSYK" and Sandra Hope's version of Two-Face is...wanting. He doesn't look all that much like the recent, dramatic redesign, and he doesn't even wear a half-and-half suit! I guess maybe he's undercover here, as he's really supposed to be in Arkham Asylum at the moment (or at least he was in Batman/The Shadow #1), but put some effort into your gimmick, man!

Meanwhile, the dwindling membership of Detective Club try to help her in a variety of ways, but it looks like they are being thwarted by the Academy's Terrible Trio, which, for reasons I can only guess at, have replaced The Vulture with The Raven. Wow, unable to even get the animals in The Terrible Trio right? This is a terrible trio! 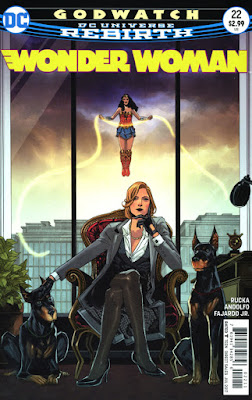 Wonder Woman #22 (DC) DC Comics Bombshells alum Bilquis Evely, who has taken over the "past" half of this series from Nicola Scott, is joined by another Bombshells alum, Mirka Andolfo. This issue is something of a done-in-one, featuring the first official meeting of Wonder Woman and her arch-enemy Veronica Cale (at least, Cale's her arch-enemy whenever Greg Rucka is writing Wonder Woman). Interestingly, their meeting occurs when Cale outbids both Bruce Wayne and Lex Luthor at a celebrity date auction for charity. The girls spend a night on the town together, during which Cale tests Wonder Woman's powers as part of a sneaky attempt to find Themyscira. Wondy shows up at her office, Superman style, to menace her; when she does so, she's wearing her post-"Rebirth" costume, even though I thought this was taking place soon after "Year One" and I realized that I am now officially lost in terms of Wonder Woman's alternating-issues-set-in-alternating-points-of-her-history story.

I'm curious how the title will be formatted once a new, permanent creative team is found (I got the impression that the one announced to succeed Rucka and Liam Sharp was a temporary one).
Posted by Caleb at 8:43 AM

Come to think about it, both DC and the Turtles have so many different alternate universes they could possibly do a joint Crisis or something like that.

I dropped Detective. It has art problems that Batman and Nightwing have been able to avoid plus it keeps dropping off its more interesting characters. Plus my budget.

Though I am thinking about getting Bug! and am surprised it didn't show up here. Having read all of the Fourth World stuff Bug! and Mister Miracle are more appealing to me than Kamandi Challenge (though I really want that Kamandi Omnibus).