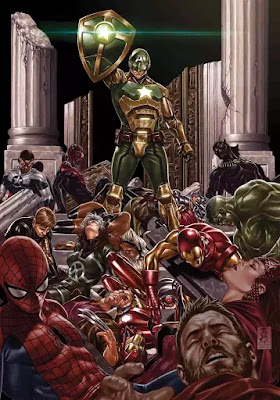 Say, Secret Empire will still be going on come August? Huh. Given the rate at which President Trump is incriminating himself for obstructing justice every chance he gets--television interviews, meetings with foreign leaders, simply walking by groups of people with microphones and cameras--it's possible that our national story of an all-American role being filled by a nefarious fascist will be over before Marvel's event series about the same is.

What else has the House of Ideas got in the hopper for August, aside from Secret Empire? You can go to CBR to find out. You can also just hang around here for a while for a much less complete listing, plus some remarks. I don't care. It's all the same to me. 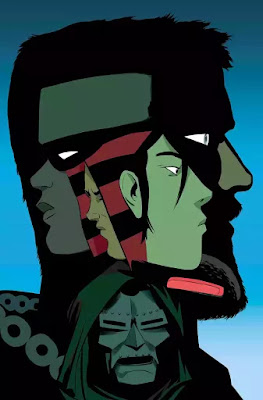 I don't think this comic book, Doctor Strange and The Sorcerers Supreme should even exist--at least, not at this moment in history, when there is already another Doctor Strange title on the shelves--but that doesn't mean I can't appreciate that excellent Javier Rodriguez cover. Wow. 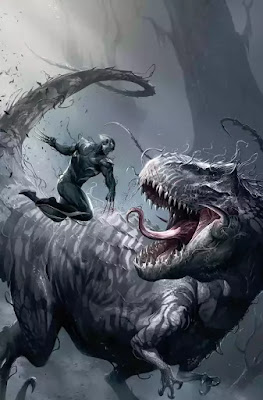 EDGE OF VENOMVERSE #4 (of 5)
RYAN KEY (w) • ANDRE LIMA ARAUJO (a)
Cover by FRANCESCO MATTINA
Variant Cover by RON LIM
RIDE OF THE WOLVENOM!
Logan’s adopted son, Scotty, has been missing for years…but Warren Worthington III, formerly the X-Man called Angel, has found Logan at the bottom of a bottle to bring him a message: Scotty is alive, and Angel knows where he is.
A new and original story from Ryan Key, lead singer of Yellowcard, set after the events of the original epic OLD MAN LOGAN!
32 PGS./Rated T+ …$3.99 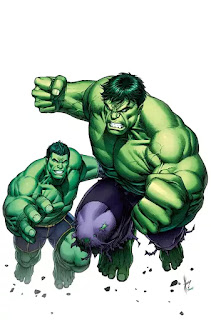 GENERATIONS: BANNER HULK & THE TOTALLY AWESOME HULK #1
GREG PAK (W) • MATTEO BUFFAGNI (A/C)
...
BRUCE BANNER. AMADEUS CHO. Both have carried the curse of the Hulk. Now they come face-to-face at last – but will they meet as friends or foes?
Fan-favorite Hulk scribe GREG PAK is joined by red-hot artist MATTEO BUFFAGNI (X-MEN BLUE) for a time-bending tale that will finally answer the question on everyone’s minds: WHO IS THE STRONGEST ONE THERE IS?
40 PGS./ONE-SHOT/Rated T+ …$4.99

One of several different one-shots pairing a particular modern legacy character with a previous version of the character whose name and/or legacy and/or powers they have since adopted, apparently through the means of time travel. I'm not sure if that is all that will collect these, or if they are part of a bigger storyline, in which, say, the modern day characters are all dispersed through time via the same means or not. 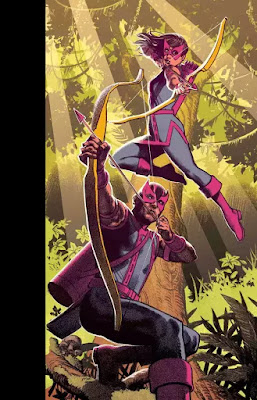 GENERATIONS: HAWKEYE & HAWKEYE #1
KELLY THOMPSON (W) • Stefano Raffaele (A)
Cover by GREG SMALLWOOD
...
TWO ARCHERS. ONE-SHOT. Kate Bishop, A.K.A. Hawkeye, finds herself smack-dab in the middle of a battle royal between the world’s most skilled sharpshooters — including an inexplicably young Clint Barton, A.K.A. the OTHER Hawkeye. The prize? Bragging rights for being named the best, of course — oh, and you get to stay alive! Unfortunately for Clint, several of his competitors are villains he’s taken down, making HIM a primary target. So, on top of figuring out where and WHEN she is, Kate’s got to find a way to win this little contest of skills and keep her not-so-old pal Clint out of the crosshairs… easy, peasy.
40 PGS./ONE-SHOT/Rated T+ …$4.99

This one is of interest mainly because of all the participating duos, this is one in which both characters used the same name at the same time and not only co-existed together for quite a while, they also teamed-up and spent an awful lot of time around one another while they were both using the name.

It's nice to see that Thompson herself is writing this, as that means it's a little more likely to tie-in to her ongoing Hawkeye comic (starring the Kate Bishop version, of course), even if only tonally. I'm not sure which of the multiple variant cover artists drew that particular cover, but I find Kate's costuming...interesting.

The title of this one makes perfect sense, but I think I would have preferred Hawkguy & Hawkeye, or, perhaps, Hawkguy & Lady Hawkguy. But that's just me.


GENERATIONS: PHOENIX & JEAN GREY #1
CULLEN BUNN (W) • R.B. SILVA (A)
Cover by STEPHANIE HANS
...
Teenage Jean Grey is willing to do whatever it takes to avoid the fate that befell her predecessor. But when Jean is cast through time and comes face-to-face with the newly possessed Phoenix, will she find the key to saving herself…or learn that her fate is sealed?
40 PGS./ONE-SHOT/Rated T+ …$4.99

Huh. So in this iteration of the concept, rather than two different characters from two different generations, we get the same character from different generations of her own life...? Also, I guess this one will involve double time travel, as the teenage Jean Grey is already in the present Marvel Universe thanks to time travel, and now she's time travelling again, but only like, what, half-way back to the point at which she left her original time in the first place? 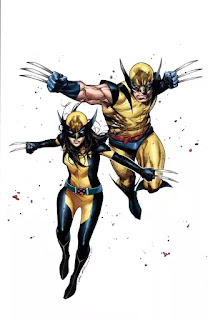 GENERATIONS: WOLVERINE & ALL-NEW WOLVERINE #1
TOM TAYLOR (W) • RAMON ROSANAS (A)
...
THE TEAM-UP YOU’VE ALL BEEN ASKING FOR! The death of WOLVERINE shook the Marvel Universe… And the ascension of the ALL-NEW WOLVERINE reimagined what a healing factor and some Adamantium claws can do!
But the amazing combination of LOGAN and LAURA is the duo you’ve been waiting for! Tom Taylor, the mind behind ALL-NEW WOLVERINE, brings you Generations…a double-Wolverine team-up for the ages!
40 PGS./ONE-SHOT/Rated T+ …$4.99

Er, has anyone been asking for this particular team-up? Logan and Laura have spent plenty of time together over the years, but I guess this would be the first time they did so while they were both going by the codename "Wolverine" and both wearing their goofiest costumes.

Again, this is being written by the writer who handles the modern character's ongoing series, and thus is probably going to be more relevant than it might otherwise be. Plus Tom Taylor is a particularly good writer, so that's promising too. 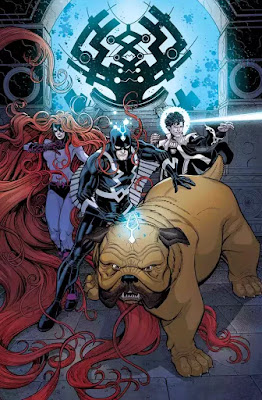 INHUMANS: ONCE AND FUTURE KINGS #1 (of 5)
CHRISTOPHER PRIEST & RYAN NORTH (W)
PHIL NOTO & GUSTAVO DUARTE (A)
COVER BY NICK BRADSHAW
...
TELEVISION VARIANT COVER ALSO AVAILABLE SOMEDAY, ALL OF THIS WILL BE YOURS!
A king in training. A brother destined for madness. These are the early days of the Boltagon legacy. When the king of the Inhumans is attacked, Black Bolt and Maximus spring into action to save their leader! But when Black Bolt loses control, what are the consequences for his future kingdom – or his own family? Plus: A two-page backup (in every issue!) starring Lockjaw, as told by UNBEATABLE SQUIRREL GIRL writer Ryan North and artist supreme Gustavo Duarte!
32 PGS./Rated T+ …$3.99

There are few Marvel concepts that I find more uninteresting these days than the Inhumans, but man, look at the folks making this Inhumans comic. Christopher Priest! Ryan North! Gustavo Duaarte! A Nick Bradshaw cover! And not one but two stories featuring Lockjaw!

I may actually read this one...! 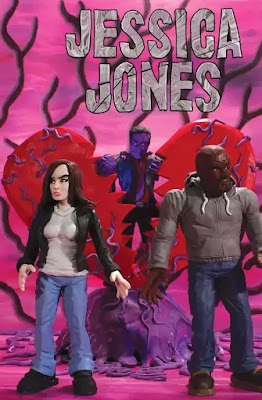 JESSICA JONES #11
BRIAN MICHAEL BENDIS (W) • MICHAEL GAYDOS (A)
COVER by DAVID MACK
VARIANT COVER by MR. OZ
The secrets of Maria Hill are revealed, and the Marvel Universe will never be the same again! Has Jessica opened a door that she can now never close? And how will it affect the other Defenders?
32 PGS./Parental Advisory …$3.99

"Mr. Oz"...? The guy in the green cloak who has been giving Superman and some of the other heroes of the DC Universe such a hard time since DC Universe: Rebirth? Huh. I didn't even know he was an artist, let alone a sculptor who specializes in either clay or maybe Play-Doh. I wonder how Marvel managed to land him for that gig...?

I'm afraid I am unable to think of a joke that can properly express the true depths of my reaction to this. I wish there was an eye-rolling emoji on my keyboard though... 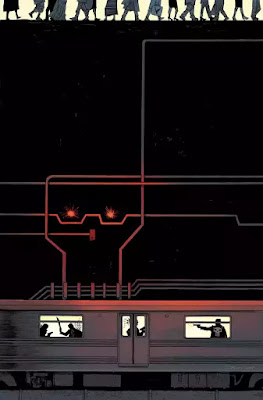 I read (but didn't review) the first collection of this current volume of The Punisher--it was, like the bulk of post-Ennis Punisher comics, fine but nothing spectacular--and while I stopped there, I remain fascinated by the various ways in which they work skull designs onto the covers. This one looks like a particularly good one. 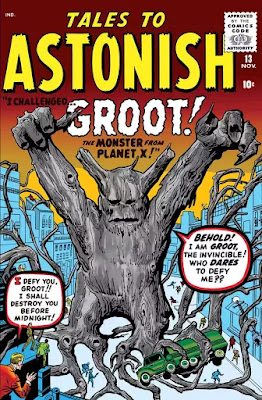 Ooh, this is a story I've really been wanting to read for a while now. I'm not sure what the economics of these reprints are, as I've never yet purchased one of Marvel's "True Believers" line of occasional reprints, and therefore don't know their page count or anything. I'm not sure if Marvel takes a loss on them but views them as ads for their collections, or if they make a profit but not a huge one, or what. But man, I would totally buy an ongoing series reprinting the classic monster comics of that era for $1 an issue. Hell, I'd buy it for $2.99 an issue. 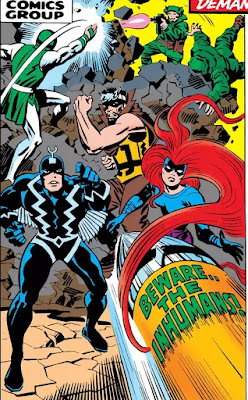 Oh hey, look! An Inhumans comic from back when that group of characters was still kinda cool and interesting, because they were a) weird and perhaps most importantly, b) rarely seen.


ULTIMATES 2 #100
AL EWING (W) • TRAVEL FOREMAN (A/C) VARIANT COVER by MARK BAGLEY Kirby 100th Anniversary Variant Cover by JACK KIRBY
A double-sized issue celebrating ULTIMATES #100! • Eternity is free – but can even he stand against the might of the First Firmament? • Or does the embodiment of everything need help…from Outside? • Featuring the Ultimates and…the Ultimates? 40 PGS./Rated T+ …$4.99

Well, I'm stumped. Even if you add together every issue of every comic ever entitled Ultimates 2 that ever published, there's still no way in hell you get anywhere near 100.
Posted by Caleb at 2:34 PM

It makes perfect sense for Mr. Oz to bounce back and forth between Marvel and DC, since the very first Marvel and DC collaboration actually was a Magical World of Oz book. No joke!