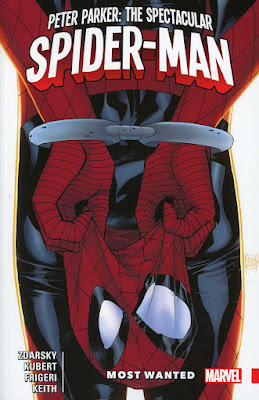 Peter Parker: The Spectacular Spider-Man Vol. 2--Most Wanted (Marvel Entertainment) This trade collects the next four issues of writer Chip Zdarsky's new Spider-Man series, which here means issues #297-300, because Marvel. It is very much a continuation of the same story that was in the first volume, a feud between villain The Tinkerer and his brother Mason, with the former upgrading tech-based villains and the latter tech-based heroes, with Spider-Man and his kinda sorta sister Teresa caught in the middle, and it will continue into at least the next volume as well, as there's a turn in here that means Spidey and company will still be dealing with the outcome of The Tinkerer's machinations for at least a few more issues. As a superhero plot, it works just fine, and Zdarsky writes an excellent Spider-Man, although the first volume was much funnier, and contained more scenes written just for the sake of being funny and/or character work.

There's at least one pretty amazing image in here, a splash page drawn by the book's on-again, off-again artist Adam Kubert that demonstrates just how close the two brothers actually are. There's another image that should be pretty funny, but the way it's drawn and colored blunts the impact pretty severely (When Peter Parker needs to suit-up in an emergency situation, he's left with only a poorly-packed spare costume, which here means his black-and-white suit, but with the red and blue suit's gloves and mask).

I was a lot more impressed with the first volume than this second one, to the extent that I'm questioning whether this is a series I need to buy in trade or just borrow from the library. I wonder if the book might be better-served by an artist whose storytelling sensibilities are closer to Zdarsky's...and who can draw every issue of the series...? 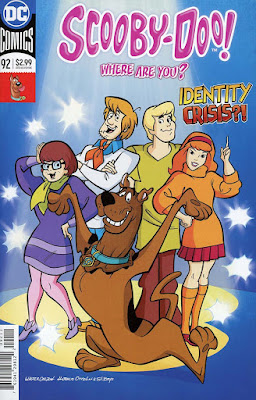 Scooby-Doo, Where Are You? #92 (DC Comics) While I've been enjoying Scooby-Doo Team-Up immensely, it has been a long, long time since I've checked out the main Scooby-Doo comic. I decided this would be a good time to check in with it given that 1) I've been watching the second half of the first season of Be Cool, Scooby-Doo on DVD, putting me in more of a Scooby-Doo mood than usual, 2) There's not much on my comic book shop shopping list that's out this week (which has been occurring more and more lately, to the point where I will likely be revising this particular feature on my blog in the near future), and 3) That's a pretty intriguing cover, of the sort that can make a curious reader want to pick up the book just to see what exactly is going on (Even though I do find the image of Scooby-Doo wearing a mask of his own face somewhat terrifying).

The comic is still broken up into multiple stories, at least one of which is pretty clearly a reprint (although was still new to me). The cover story is written by Ivan Cohen and drawn by Walter Carzon and Horacio Ottolini. Mystery Inc are the guests of honor at "Sleuth Con International," which is basically just Comic Con for...mystery-solving, I guess. They are there for less than a page when they find that a crime has been committed--someone has stolen a collection of masks that they have pulled off of ghosts and monsters in the past. They find investigating difficult though, as they keep getting stopped by fans, so they switch clothes so they can blend in with the other cosplayers (Scooby, who has no one to change clothes with, dons a mask of his own face--Brr!).

It's a neat idea for a visual gag, but not terribly well-executed, I'm afraid. Like, Shaggy and Daphne should be swimming in Fred and Velma's clothes; Shaggy's baggy clothes should be tight-fitting on Fred, and Velma should be threatening to burst the seams of Daphne's tiny little purple number. Carzon doesn't do anything with the visuals though to make the wardrobe-swapping even noteworthy, and Cohen's story takes the path of least resistance from Point A to Point B, leaving plenty of jokes on the table. The one thing he did do that was kind of clever was putting "Old Man Carruthers", a former Scooby-Doo villain, as a reformed criminal, now exploiting the notoriety of his brush with Scooby and the gang to make a living off the convention circuit.

That's followed by a four-page story by Scott Peterson, Tim Levins and Dan Davis, a Shaggy-starring homage/parody of Edgar Allen Poe's "The Raven," perhaps appropriate given that someone dressed like Poe plays a role in the lead story (Page three of the story is actually surprisingly dark, as Shaggy begins to wonder if his friends have all died, although the dialogue never makes a direct reference to death).

Finally, there's an eight-page story by Frank Strom and Scott Neely which is pretty clearly a reprint, as the second panel contains a banner reading "2009 International Surf Open."

I suppose the comic is okay, but I think it falls into a weird area where it's definitely not all-ages, but also a kid would have to be old enough to read fairly well to get much out of it. I suspect the window in which a kid is of the right age for the book is a particularly small one. Certainly when compared to Team-Up, which is a genuinely all-ages book.
Posted by Caleb at 3:36 PM