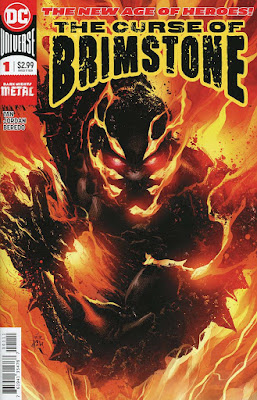 *The cover is awful. Not necessarily the one you see above, but the vertical fold-out one. Remember, all of these "New Age of Heroes" comics have fold-out covers, but rather than the more traditional horizontal fold-out covers, they are vertical ones, so what you see on the cover is the middle third of the image, and there is more of it above and below. It is, as I've said before, a very awkward and unnatural space to fill with a superhero image of any kind, and none of the books have really been great about filling it. The Silencer probably handled it the best, and even that one was less than idea.

Anyway, while I suppose it's interesting that they tried something different, based on the results, I don't think they should ever do this again. Unless George Perez wants to draw every Legion member ever on a cover or something like that, or there's an incredibly detailed cutaway image of The Justice League Watchtower or Dr. Fate's tower, maybe. Ooh, or something like the cover of Crisis On Infinite Earths #12, where there's a much less-dynamic image of a giant antagonist being swarmed at all levels by a large group of superheroes...

So maybe there is a way to use the space on a DC super-comic that would be interesting, but the composition of Curse of Brimestone is, like the others, a weird sort of portrait of the character with way too much background placed awkwardly and here filled, as it is in other covers in the line, but images of supporting characters.

*As with most of the previous books in the "The New Age of Heroes" line--the ones I actually read anyway--there's nothing within the pages of the book itself to indicate that this does indeed somehow spin out of the pages of Dark Nights: Metal, save for the bit in the corner box saying that this is part of the "Dark Nights: Metal" family of comics. Now that Metal is over and we've all read the final issue, it's clear how they tie in. And that is? Just barely. There's a panel in the epilogue section of Metal #6 where Kendra Saunders says "The rupture of the barrier between realms of The Multiverse has unleashed new energies, revealed new beings...and new battles," and Immortal Man intones gravely, "This is the dawn of a New Age of Heroes... if they can survive what's coming for them." And that's it!

*I actually flipped back to the cover after seeing the first page of the issue, because I was curious if that first age was simply repeating the cover image. It's not. It is a splash page depicting the head, torso and arms of the main character in a field of flame, however, just like the cover.

*On the second page, our young protagonist Joe Chamberlain narrates about his hometown, York Hills. It was, he tells us, "great once", and the town and the people were "here because of coal. When the coal left, the factories came. When the factories left... ...nothing came." It's just four panels, but co-writers Philip Tan and Justin Jordan have presented a very Election Year setting, of a depressed coal town with few economic prospects in need of being made great again. Our hero's father was injured in a factory, and his disability check is currently supporting the prospect-less Joe and his sister, who works tirelessly at a diner while studying to become a nurse.

*Joe, who is extremely civic-minded, because that's what he needs to be in order to drive the plot, has what one assumes is a rather typically bad day when his beat-up old truck dies for the second time. He's offered a ride by a guy in a business suit who wants to talk about turning things around in York Hills, and Joe gets in the car with him. Despite the fact that it totally sounds like the guy is trying to get Joe to sell his soul to him, Joe tells him exactly what he wants and then takes his hand, at which point Joe bursts into flames for a few pages and there are some fire tornadoes or something and then the book ends.

*Tan, the artist co-creator who will be drawing at least the first few issues, has his art colored by a Rain Beredo. I've never been a fan of Tan's work, and I can remember when I first saw it on a pretty high-profile DC book, I was quite disappointed, as, up until that point, all of the art on that book had been excellent for years. That said, I didn't mind, and actually kinda liked it here.

Tan and Beredo use either a lot of inks or a lot of blacks or a little of both. Everything in the book looks its crumbling into ruin; even Joe's dad's easy chair, which we see him slumped asleep in at one point, looks like its been riddled with bullets. There are several points where the entire panel around Joe are filled with nothing but darkness, just a field of black for a background, but here it feels intentional--an artistic choice to show the character's isolation--rather than a time or work-saving technique.

*That slick devil-type guy is pretty mysterious, and the issue ends without really defining him. He seems to travel with something he refers to as "The Hound," of which even less is revealed, other than The Hound's ability to freeze a human body solid. The diabolical businessman puts on a weird mask at the end, which is something of an upside down emoji, and it's very manga-esque in its conception, even though the rendering of it--and all of Tan's artwork--otherwise betrays no influence from popular Japanese comics.


*It's rather unfortunate that the issue ends as it does, with an unresolved issues of who the devil-like deal-maker guy is, what he's done to Joe and what direction the book might be headed. Unfortunate only in that one doesn't really get a real sense of where the book might be headed after buying the first issue, and you apparently need to read at least the first two issues of the series in order get a sense of the premise. I think both The Silencer and Damage did a better job of establishing a premise, and allowing readers to decide whether or not they would be for them or not.

I think, in general, that if you need to read at least two issues of a brand-new comic book to decide if you really want to read more issues of it or not is usually an indication that you don't.

*I do like one element of the artwork quite a bit though, and that is the blackness of the basic character design, which, at least in the scene at the end of the book, is somewhat evocative of the 1990's Ray design, and also here seems to spread burnt ash and cinders in little flurries. From what I've seen of the design in this issue--and yeah, I guess we don't really get a good look at the superhero within the pages of the first issue of the new superhero comic, which is also a weakness--the design is rather uninspired.

*If you're curious if this book has any relationship to DC's previous Brimstone character, the Apokalyptian giant that Johns Byrne and Ostrander created for their 1986 Legends series, there doesn't seem to be one. Other than the fact that they share a name, and the new Brimstone's design echoes the original's a bit in the face. As with the new Damage's relationship to the old Damage, then, this seems to be more a matter of recycling a name than anything else...although it's possible that the deal-maker character could end up having some relationship to Darkseid or Apokolips that will be revealed in future issues.

*All in all, this was probably one of the better of the new line of books, along with The Silencer, I suppose. I mean, I could bring myself to read it, and to read it all the way through, which makes it superior to Sideways and The Terrifics, and it wasn't as bad as Damage, so there's that.