On The Immortal Men #1 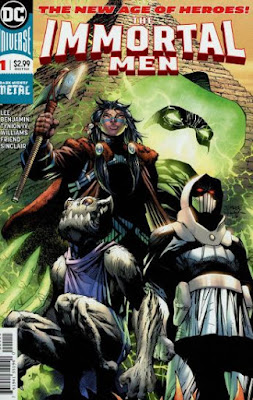 *As I've noted previously, Immortal Men probably should have been the first of DC's "The New Age of Heroes" line of books to be released, in order to get the line's roll-out started off on the right foot as a proper spin-off of the Dark Nights: Metal event series.

In terms of personnel, Immortal Men is co-written by one of the co-writers of various Metal tie-ins, James Tynion, as well as being drawn by Metal variant cover artist Jim Lee. In terms of plot, it seems to involve various immortal characters, and a cabal of pre-existing DC Universe immortals were somewhat prominently featured in the early parts of the Metal event and, of course, one the event's more popular characters--The Batman Who Laughs, with his crowing pack of leashed, cannibal Robins--appears on about page of this issue, briefly consulting with what appears to be the new series' main villain.

In terms of business, this issue is pencilled entirely by Jim Lee (with Scott Williams and Richard Friend inking), and thus was always going to do pretty decent sales; I'm not sure what draw Tynion and his co-writer Ryan Benjamin are in the direct market, but certainly Tynion's Detective Comics has long been DC's second best-selling ongoing series (after Tom King and company's Batman; in both cases, I suppose one can argue whether it's the Batman or the people making the Batman that make those books the hits they are). In other words, Immortal Men was poised to move a lot more copies than, say, Sideways or The Silencer.

Wouldn't it therefore have been better for the health of the entire line to start with Immortal Men? Instead, it's the sixth of the "New Age" books to debut, and it's taken so long to arrive--Damage #1 was released in January, remember--that we were seeing estimates of how well the line was doing before Immortal Men even showed up in comics shops. And it didn't look good; The Terrifics seemed to be a decent mid-list seller for DC, with everything else far below that and seemingly steaming ahead towards cancellation (Remember too that these books were apparently designed to launch big and drop off precipitously, as the artist/creators responsible for coming up with the new characters were only scheduled to draw the first few issues and then bolt).

Might the whole line not be doing a bit better right now if Immortal Men had launched in January or February...?


*If not the first book, then Immortal Men should maybe have been the second. There's definitely an argument to be made for writer Scott Snyder's New Challengers having kicked off the line. Challengers Mountain may have only played a small-ish role in Metal, but then, Snyder wrote the damn thing, so if his was the first "New Age" spin-off, it would definitely sent a signal that maybe the folks who dug Metal should be trying out all these books with the words "Dark Knights: Metal" emblazoned in their corner boxes. Instead, it looks like No Justice is being viewed as the real follow-up to Metal...


*The title seems to be derived from that of a minor-ish Silver Age DC character, the imaginatively named immortal man, Immortal Man. He first appeared in a 1965 issue of Strange Adventures drawn by Jack Sparling, and then appeared in a few more issues of that series.
He later showing up as part of The Forgotten Heroes in the 1980s, and more randomly in the pages of Animal Man, The Flash and Resurrection Man in the 1990s.


*I haven't really liked any of these covers, which have all been vertical gate-folds. This one is no different. The main image, the middle third (seen above), features the title team. We will get to them in a bit, but for now I just wanted to note that the posing of the one character, who looks a bit like a bolt of green lightning dressed as a mystery man character, seems to indicate that he is their leader, or perhaps a villain, neither of which really seems to be the case.

The top third features another rather mystery man-like character in an action pose, a series of floating heads behind him. These seem to belong to Hawkman (or a Thanagarian with a helmet like Hawkman's), Ra's al Ghul, Barbatos (?), a guy who looks like Vandal Savage but is apparently Immortal Man and..someone I don't recognize who is much better groomed than Ra's or Immortal Man.

The bottom third features a group of characters with spears made of light, one of whom has the rather Saga-esque name of The Hunt and appears within these pages.. There's also a...thing that looks like Hawkman's mask if it came to life in a 1980s horror movie. The three images don't really go together; this scans more like a vertical triptych than a single image.


*This is the plot of the first issue: A teenager name Caden Park has a recurring dream in which he finds some sort of underground superhero school referred to as "The Campus" based around a pyramid structure. All around him, other teens with super-powers are being killed, but he is rescued by the guy with the green energy body and wide-brimmed hate on the cover, and sees a mysterious man  who we will soon learn is Immortal Man. The dream is dramatized for the reader, but Caden is telling the story to his therapist Dr. Calendar, as the last time he had it he woke up on the ground at Grand Central Station. Additionally, he's lately discovered that he may have some kind of latent but growing psychic powers, as when he touches someone he sees a brief image from their life.

Meanwhile, The Hunt kills a surviving super-hero in the ruins of the real Campus, where he is met by The Infinite Woman, the apparent sister to The Immortal Man, who she is warring against. The pair are then joined by The Batman Who Laughs. They are after Caden, who a group of four agents of the Immortal Man are also seeking. These four are the characters on the cover, and they make a point of saying one another's names during their scene, to let readers know who they are.

In the book's final scene, Caden is attacked on the train. He thinks he sees the Immortal Man from his dreams, but it turns out to be a hologram luring him into an attack by The Infinite Woman's "Bloodless," which appear to be some sort of big, red monsters that resemble, from different angles, either a human embryo or a beluga. The quartet of super-people come to his rescue and announce themselves as "The Immortal Men." Yes, they are 50% female, but hey, The X-Men all call themselves "X-Men" regardless of gender.

*So who are these Immortal Men? They certainly seem like Jim Lee creations! They are:


Ghost Fist: This is the character who is drawn extra-large and seems to be presenting or clutching at the others on the cover, the one who looks a little like a lightning bolt dressed like The Green Hornet. He appears to be a dude in a trench coat with a fedora and old-school domino mask. He lights up when using his electrical powers. They aren't really explained here, but I didn't think the name fit the design all that well. I was honestly expecting him to be called Doctor Zzzap (with three z's because that's how many are in his sound effect) or Mr. Shock or something.

Stray: This is the bestial character whose head looks to be borrowed from Jeff Smith's stupid, stupid rat creatures. I kind of like the jack o' lantern like mouth, although the particular design seems somewhat strange in the otherwise realistic Lee-drawn world.

Reload: I actually didn't catch this guy's name the first time through the book. He's the one dressed all in white with the red eyes. If he has any powers, they weren't demonstrated. He does have a gun though, to go with his lame G.I. Joe-esque name. Under his hood he wears a full-face mask, and those lines stretch over its entirety. Based on the cover image, in which much of his face is in shadow, I thought perhaps that was supposed to be a big smile.

Timber: This is the Native American character. It's difficult to get any real sense of scale from the cover images, but I think she is supposed to be giant in size all of the time. Even within the book, though, there isn't really a good demonstration of this. As she was a very large Native American super-lady appearing in a DC comic, I was afraid she would end up being a New 52 answer to Apache Chief, or at least Manitou Raven or Manitou Dawn, the Apache Chief-inspired ancient shaman characters Joe Kelly and Doug Mahnke introduced during their JLA/Justice League Elite run/s. Again, we know next to nothing about her save for her name and basic appearance, but if she has a DCU antecedent, it may be Tall Tree, one of four Native American shamans who made up The Renegades in 1977's Freedom Fighters #11, by Bob Rozakias, Dick Ayers and Jack Abel (and reappeared in a different form in Jimmy Palmiotti, Justin Gray and company's 2010 Freedom Fighters). Tall Tree's power was to grow into giant size.

*There are a few panels that look particularly rough around the edges. Look at Caden and, especially, his parents on the fourth panel of page six, for example. Or the fifth panel on page five, where Dr. Calendar is shown sitting at home in front of...a giant bong? A dehumidifier? A hookah? Maybe the sort of bottle that the title character of I Dream of Jeanie was trapped in...?


*It's a fairly solid first issue, introducing a bunch of new characters and various elements (like "houses" of immortals with certain spheres of influence, for example) and offers just enough of them to let a reader get a pretty good idea of whether or not this is the sort of book they are going to want to keep reading. I think if I had to follow one of the six "New Age" books that have debuted so far, this would be the one I would follow.

Logically what you say about this book dropping in Jan. or Feb. to kick off the line makes sense. But practically speaking holding up the whole line for Lee to finish would have been a bad idea. He wasn't the fastest creator back when that was his main job and now that penciling is a sideline from his administrative duties he hasn't gotten any faster.

Ryan Benjamin may be the co-plotter of the book, but he's also the main artist going forward. I'm guessing he at least did layouts for most of issue one.