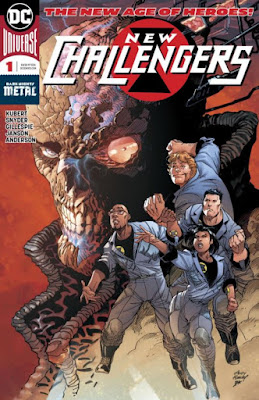 *This is the seventh of "The New Age of Heroes" books out of the gate and, like The Immortal Men, it's one that should probably have been the first or second one released, helping to get the troubled line off on the right foot. It, of course, has the benefit of being written by Scott Snyder, who conceived of and wrote the Dark Nights: Metal event series that the "New Age" books are supposedly spinning out of (although the degree to which this is the case varies from book to book). And while the the "New Age" books don't exactly follow up on the events of Metal--you'll want No Justice and the upcoming Justice League line for that--they are supposedly books inspired by Metal. Challengers Mountain, for example, played a role in the series, so Metal likely made some readers think, "Oh yeah, The Challengers! I wonder what's up with them these days...?" Well, Snyder prompted the question, so now he's providing the answer.

Additionally, the artist getting top-billing here is Andy Kubert. I'm not sure if any Big Two artist is a big enough deal at this particular moment in time that their presence on a book alone is enough to make it a hit--not even Jim Lee, who is probably the closest to still being so--but a new Andy Kubert book seems like a bigger, more exciting deal than, say, a new Tony Daniel or a new Philip Tan book.

*While the line's exact remit has been pretty fuzzy ever since it was announced, regarding not only if and how the books were related to Metal,  but also to what degree the artist creators were going to be involved and for how long, and even the line's very name. This particular release underscores another muddy aspect: Just how "new" the characters and concepts are supposed to be. Some books have featured brand-new characters, like The Silencer and Sideways. Some feature brand-new characters making use of old names, like Damage and The Curse of Brimestone. One, The Terrifics, has taken a quartet of pre-existing characters and put them together into a new team. Others, like The Immortal Men and the yet-to-be-released The Unexpected, seem to be mixing pre-existing characters, with new characters using old names and brand-new characters with new names.

New Challengers is...none of the above, exactly, although close to the new characters with old name/concept strategy. This is, after all, an update of DC's old Challengers of The Unknown concept. The Challs are the creation of Jack Kirby (as something like two-thirds of all Big Two IP seems to be some days), from way back in the pre-Silver Age Superhero Revival days. A group of four two-fisted adventuring types with manly-man nicknames, the original team miraculously survived a plane crash, and came to the logical conclusion that they are now living on borrowed time, and therefore they should form a team that takes on extremely dangerous missions investigating occult phenomenon, monsters, mad scientists and the like. Given that they were a group of four adventurers in matching uniforms who addressed fantastic challenges, they are a pretty obvious forerunner of Kirby's more famous co-creation, The Fantastic Four (a fact acknowledged in 1997's Amalgam one-shot, Challengers of The Fantastic by Karl Kesel, Tom Grummett and Al Vey, which amalgamated the two teams into one).

After the initial, successful run in Showcase and then their own book, DC has attempted to bring them back repeatedly, but they never really hit. In 1991, Jeph Loeb and Tim Sale gave it a shot (you can probably find that in its collected form, The Challengers of The Unknown Must Die!). In 1997, there was a short-lived revival attempt by Steven Grant, Len Kaminsky, John Paul Leon, Shawn Martinbrough, Jill Thompson and--Hey, that sounds pretty good! Maybe that should be collected in trade--that lasted just 18 issues. And in 2004, Howard Chaykin did an equally forgotten miniseries. The last time we saw the Challengers was in a 2012 issue of the DC Universe Presents title, wherein Dan DiDio and Jerry Ordway introduced The New 52 iteration of the team in a three-issue arc that involved reality television.

In other words, the Challengers are probably due for another attempt at their own title, and making that title something that can survive, let alone succeed, is going to be, well, a challenge.

*So, the cover. As I've mentioned with, like, every one of these "New Age" books so far, the artists really struggle with the vertical gatefold space. Kubert's strategy for the cover was to make use of the hourglass motif, which has served as the icon for past incarnations of the team--that whole borrowed time motif--but in order to fit an hourglass into that space, he has to elongate it so that it is much, much, much taller than it is wide, to the point it doesn't really look all that much like an hourglass anymore.

The other weird thing about the cover? See the rather ugly guy who appears as a giant head behind the team? I'm not entirely sure what his deal is--I've barely read any past Challengers comics, so I'm not sure if he's a pre-existing character or not--but the cover gives us a pretty good look at his face. The opening scene of the comic, however, features that very character, his face almost completely wrapped in bandages, Unknown Soldier-style, so that pretty much the only thing we can see of him are his two mismatched eyes. Obviously the reveal of what he looks like under those bandages is going to be something of a moment in the story eventually, but Kubert spoils his own moment by putting the guy right there on the cover, un-bandaged. I suppose it would be a little like having a helmetless Darth Vader on the Return of The Jedi movie poster. (Only not really.)

*Snyder and/or Kubert have come up with a pretty decent set-up for the new series. Instead of trying to come up with a brand-new, completely original take that will definitely work where all the other, post-Silver Age revival attempts failed, theirs seeks to incorporate all previous takes. So instead of all surviving from the same plane crash, the New Challengers all survive different deaths, and are brought at the instant of their deaths to Challengers Mountain via teleporter by a mysterious Professor character. (Actually, he says they did all die, and are being given additional time to serve as the latest Challengers of The Unknown, tweaking the borrowed time aspect so that he's essentially the one loaning them their borrowed time, and they will have to repay him through their service).

At one point, he shows them a room full of holographic memorials to Challengers past, and while I couldn't pick out any faces save for the ones he points out as the longest serving ones (that is, the originals), the implication is that there has been a long, long line of various teams of Challengers before, some known and some unknown. Thus, all of the other teams that have been introduced in various revival and reboot attempts could be incorporated into the narrative of this new series.

It is a rather Grant Morrison-y, "everything counts" kind of take.

*The other tweaks to the borrowed time elements are that these Challengers can only remain alive while inside Challengers Mountain; once outside on a mission the little hourglass tattoos they have start counting down the allotted time they have been given to complete their assignment and, when it runs out, they die pretty horrible-looking deaths. So for each and every mission, they seemingly need to "borrow" enough time to fulfill their mission. It's somewhat Suicide Squad-y, in that they are forced into taking on these dangerous missions on pain of death, but it is yet to be revealed if The Professor is all that Amanda Waller-y or not.

*Our four new Challengers are Trina Alvarez, Moses Barber, Bethany Hopkins and "Krunch," whose name whose name is apparently spelled the way so he can't be sued by any candy bar manufacturers. Of them, we only spend much time with Trina, and by "much time" I mean five pages. She is--er, was--a Gotham City herbalist struggling to carry on her grandmother's legacy by helping those in her neighborhood. Her old life comes to an end during a Justice League vs. aliens fight (So Kubert draws the pre-Metal Justice League for one whole panel here). One assumes we'll see the deaths of the other three Challs in the coming issues.

*They get their matching costumes, and go on their first mission, which is just beginning when the issue ends with a cliffhanger.

*Beyond what I said up top about this being a better comic to start the line with, it's also one of the better ones in terms of quality and in terms of being a first issue. Like, there are still a lot of questions left unanswered by the end of the first issue, but there's a sufficient amount of information to get an idea of where the comic might be going and what future issues might be like, so a reader can probably make an informed-ish decision about whether or not they want to read #2.

*I would, but I think I'll just trade-wait this. My prior experience with Snyder's work has lead me to believe it reads better in trade than single issues...although Metal was a pretty great read on a serial basis...

On The Immortal Men #1

Interesting that there's no artist that can sell a book. I haven't been paying attention so I can't say whether or not I buy that. My focus is more on how Marvel's essentially letting many of their best artists go after essentially minimizing the importance of artists.
What's becoming interesting about the return of Dan Didio's vision of good comics -- I mean, the DC New Universe -- I mean the New Age of Heroes is that the idea that they'd be the visions of a couple of hot artists, to the extent that they'd be produced Marvel style. Instead, none of the creating artists lasted more than a few issues, apparently none are expected to return to their creation.
I suspect both this and the Marvel thing are due to budgets and nothing more; punk sales making the use of top artists unaffordable. More: I think the Big 2 have now painted themselves into a corner by charging too much. They're nothing like mass publications and never can be; it's too late to lower prices.