A few notes on MST3K Season 12 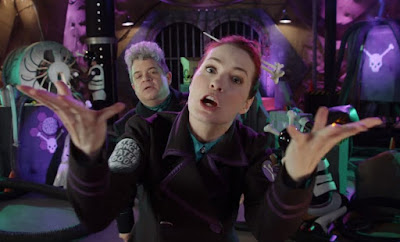 •Well, I only made it a little over halfway through "The Gauntlet" before I had to tap out. Had I been better prepared, I probably could have survived it all in one sitting, but I made the mistake of starting it around 8:30 p.m. on Thanksgiving night, and no amount of coffee could stop my eyes from burning from looking at a screen for much longer than the invention exchange of the fourth episode.


•Having failed to survive "The Gauntlet" myself, I then took my time on the second half on the day after Turkey Day, watching the remaining three episodes throughout the course of the day, taking breaks to run errands and prepare meals and take naps.


•I wasn't crazy about the format, which I allowed to exert a certain amount of pressure to play by "the rules" on me, although I understand the thought behind trying to design a season--even a mini-season--around the emergent concept of binge-watching. This also had the presumably intended effect of replicating the old Turkey Day marathons.


•I'm not sure how I feel about the increased screen time given the new 'bots, M. Waverly and Growler (Oh, and there's a kinda sorta new Mad, in the form of Dr. Donna St. Phibes, who appears in two episodes), which I had some warning of by attending this year's 30th anniversary live tour last month. There's something of a Poochie-esque aura about them, and I think it will likely remain to be seen whether or not I can get used to them or not.

All changes in the show seem at first strange and off-putting, of course, and it generally takes time and re-watching to first get used to them and then, later, see their virtues. After all, there was a lot of changes in the eleventh season, "The Return," and while it was semi-bewildering at first--it took me a few episodes before I could begin to distinguish the voices of Jonah, Tom 3.0 and Crow 3.0 in the theater, for example--I've come to like Jonah and the new voices as much as I do Joel, Mike and the previous 'bot voices.

I still haven't gotten used to Gypsy sounding so normal though, nor their habit of attaching dangling, mannequin like bodies from her neck whenever she dresses up. Nor have I been able to figure out why she brings a basket into the theater once an episode and then retrieves it later. I used to think she was delivering the props Jonah and the 'bots sometimes use, but this season she seems to be dropping Waverly off, even though he leaves immediately...?

So I'm still not quite sure what function these new 'bots are supposed to play. Aside from being new 'bots, of course. In these six episodes, they mostly help out during skits, usually playing musical instruments, a role traditionally played by Cambot. In the theater, they engage in silhouette prop comedy of the sort that was more readily employed in Cinematic Titanic than pre-"The Return" MST3K.


•I think they did a much better job of choosing movies this season, by which I mean these movies are all much more terrible. Season 11 was weird for me in that it was the first MST3K season I had ever encountered wherein I had actually seen or tried to see the movies made fun of, or would have seen them sans silhouettes providing humorous commentary.

I had seen Reptilicus during a recent-ish kaiju watching phase, wherein it repeatedly came up as "the Danish Godzilla." I had tried but failed to find a DVD copy of Yongary ("the Korean Godzilla") during that same time for the same reason. And I would have happily watched Cry Wilderness, The Beast of Hollow Mountain and the versions of The Land That Time Forgot and At The Earth's Core that episodes were based on, because they featured either Bigfoot or dinosaurs; I'll watch pretty much any movie with Bigfoot or dinosaurs in it.

This batch though? Ugh, now these were some bad movies. I've been actively trying to avoid seeing Mac and Me since its release, back when I was still in its target audience. I might have sat through Killer Fish or Ator: The Fighting Eagle based on how cool their movie posters look, but really, this season's films were all pretty abominable.


•There's some weird cognitive dissonance that occurs in the show between their callbacks to MST3K running gags that are based on very old TV shows (Like, "Jim Henson's ______ Babies" or the "McCloud!" bit) and occasional jokes that play off how rapidly culture and technology have changed. For example, the Mac and Me episode includes a riff in which the captives respond to seeing government agents run past a bunch of television sets in a Sears asking what those big, inconvenient pieces of furniture are.


•I was pretty surprised to see Atlantic Rim as one of the films an episode was based around, given that the studio that produced it, The Asylum, is devoted to "mockbusters" that are essentially poorly made on purpose...to a degree. They are like pre-fab bad movies, and lacking the degree of necessary sincerity, they seem particularly poor candidates for any kind of  mockery. The episode turned out just fine, of course, but it was still an extremely surprising choice. Particularly since all Asylum movies are equally riff-able.

It also seemed an ironic choice given the bit in Season 11's  second episode, the one featuring Avalanche, wherein  Jonah and the 'bots did a sort of PSA talking about what they call "a real problem."

"It's not okay to just combine an animal with a disaster and release it as a bad-on-purpose movie," Jonah says earnestly, attacking what has basically become The Asylum's whole post-Sharknado business model. "No longer will the public be fooled by deliberately stupid junk disguised as sincere, heartfelt junk," he says as they announce their plan to fight this scourge. 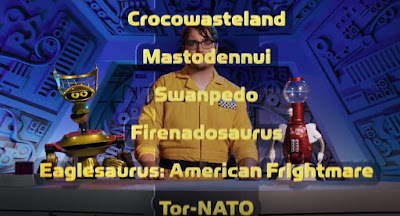 A scroll of a bunch of potential titles for such films--Woolly Clammoth, Volcanosaurus Rex, Tarantullama--starts rolling as they read them aloud, in an attempt to copyright as many as possible; it was one of the season's more successful bits.


•I was a little surprised the 'bots had nothing to say about Ator, The Fighting Eagle in relation to Cave Dwellers, which they were subjected to by Kinga's dad in the first episode of Season 3 (In fact, Ator is the movie re-told in the nigh unintelligible flashback near the beginning of Cave Dwellers). Other than a call back to a joke about star Miles O'Keefe's name at the very beginning, there's no mention to this being the 'bots' second go-round with the Ator franchise. (One of the film's in this year's live tour, the one they riffed on when they stopped in Cleveland, was Deathstalker II, a sequel to one of the terrible sword and sorcery films in one of the show's previous experiments).


•Now there are going to be a couple of spoilers, so don't read this if you haven't watched these episodes yet, okay?

I was downright shocked by the guest-appearance in this season; I don't think I would have been more surprised if Joel Hodgson's JoelRobinson character himself appeared (I mean, since he appeared in jumpsuit to riff with Jonah and the'bots during that live tour, I would have at least been ready for that, you know?). Because of that surprise, I found it pretty effective, even though it amounted to little more than a "Hey, remember me?" cameo, akin to those of the Seasons 8-10 Mads in Season 11.

Personally, I would have liked to see something of a more substantial role for the character, but now that we established he still exists and is willing to appear on the show again, maybe that will happen in the future...?

I appreciate the return of previous cast members like that a lot more than the special guest stars of Season 11, who included the likes of Mark Hamill, Jerry Seinfeld, Neil Patrick Harris and that one guy whose name I had to look up and who I have already forgotten (The guy who played Doug McClure). Hammill, Seinfeld and Harris didn't play themselves (as the only guest-stars to appear in the pre-The Return iteration did), but just completely random new characters who were only tangentially tied to a particular element of a movie, if that. They were basically wasted, and I'm glad this season's only guest-star was a returning cast member reprising his role.

I still hope to see Frank Conniff and Trace Beaulieu reprise their roles--either as ghosts or in flashback--and wouldn't mind seeing Mike Nelson or Joel Robinson reprising their characters in some way, shape or form.


•The ending was...well, to use what seems destined to be a running gag from this season, pretty nice! The ironic justice that The Mads get was nice and, honestly, wouldn't be a bad place for them to end up, in the unlikely event that this was the end of the series (or the end of the Kinga and Max characters; I think it's way too soon to retire them, personally, but I worried about Patton Oswalt's involvement as soon as it was announced, given that he seems to big a star for the show. Even Felicia Day seemed a big name for Mystery Science Theater and her resume is nowhere near as Hollywood impressive as Oswalt's).

Having Synthia, Phibes and Boneheads take our heroes to Earth for a live tour was neat too, tying the shows to the TV show. I've seen two featuring the new cast now; the weird thing about them was the conceit. We were basically being asked to play along as if the theater were transformed into the Satellite of Love, but, at the same time, the characters would say "Hello, Cleveland! You've probably never herad that before, have you?" and interact directly with the audience.

Now, retroactively, their appearances in Cleveland make a certain amount of in-story sense! However, Joel was present for this year's, and there was no story component explaining why Joel was there in his jumpsuit, hanging out with Jonah and the 'bots.


•I still think the reboot needs to engage in some shorts. I realize the reason for the shorts was that time needed to be filled to make sure the show fit the programming block it was scheduled even if a particular film might be shorter than others, and that problem doesn't exist on streaming shows, but I think most MSTies can I agree that many of the best gags from the first 10 seasons came reaction to the various shorts and serials.


•I still want to see some sort of "Crisis"-like episode in which some sort of stress on the time space continuum gives us three Servos riffing together (J. Elvis Weinstien, Kevin Murphy and Baron Vaughn), three Crows riffing together (Beaulieu, Paul and Bill Crobett) and Joel, Mike and Jonah, even if we never see the humans together outside of the theater (Hodgson and Nelson have obviously aged in ways the 'bots can't, so it would be difficult to pretend they had somehow traveled through time).
Posted by Caleb at 3:39 PM

You did eventually find a copy of Yongary, right? Because Kino has a good one, with a very informative commentary.

Have you stopped your kaiju reviews? I really enjoyed your write-ups of them since I don't have the patience to watch them myself.