What is Batman whining about now...? 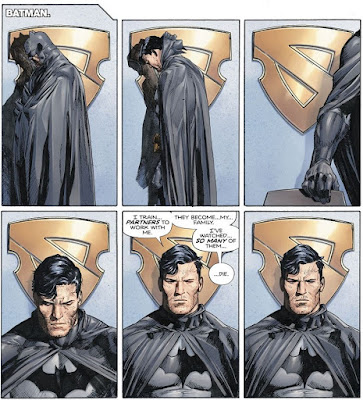 Serious question: Is Heroes In Crisis supposed to be canon, or is it being made into a continuity-light, Black Label series or something...? Because what is Batman even talking about? Because anyway you want to categorize his Robins who have died, none of them have died very long. He trained Jason Todd and Tim Drake and they both became like family to him. Jason Todd did, in fact, literally die--temporarily--and come back to life almost immediately afterwards. Tim Drake never really died, Batman just thought he died for a while, and then Tim escaped the prison he was hidden away in. Batman didn't exactly train Damian Wayne--first Talia al Ghul and the League of Assassins did, and then Dick Grayson trained him as Robin, and Damian never really "became" like family because he was literally family from birth. Batman did watch Damian die, of course, but, again, Damian came back to life almost immediately upon his death.

I honestly have no idea why Batman is even bringing this up. It seems like the sort of mistake a new writer might put into a story if they weren't, like, familiar with Batman comics of the last decade or two, but Heroes In Crisis is being written by the current writer of Batman, who has been writing the series for years now.

Don't get me wrong, I'm sure Batman has a lot of trauma in his life--the deaths of his parents, his inability to be in a relationship with a woman who isn't a super-villain or doesn't die immediately upon finding out his secret identity, having seen a few thousand corpses on a nearly nightly basis, all that stuff with time travel and the multiverse, simple head trauma from getting beat up all the time--but if he's going to spend time unmasking to talk about his problems with a special therapy robot, "one-fifth of my sidekicks have died and then got better" is a weird one to foreground.

Maybe Stephanie Brown Robin is supposed to be a thing again.

Maybe Robin the Toy Wonder from DC One Million.

Maybe, just like the three Robins and the other Harley Quinns, DC is now going to tell us there were more Robins we didn't know about.

Nothing would surprise me about these people anymore.