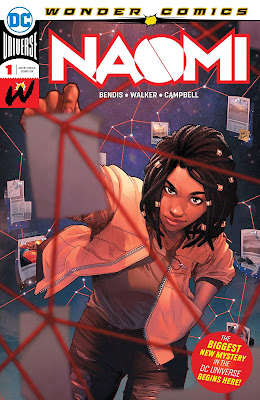 Brian Michael Bendis has been such a popular and such a prolific writer for such a long time now that long-time readers of mainstream super-comics almost can't help but be extremely familiar with his work; if you've read Marvel comics at all in the past two decades, than you would have had to work rather hard to avoid reading lots of Bendis-written comics. Regardless of whether familiarity really does breed contempt or not, it certainly breeds familiarity, and the writer's various strengths, weaknesses and stylistic signatures eventually have become so well-known that his work can become predictable to the point of tedium.

Moving from Marvel to DC has helped immensely, as the writer gained access to new characters, a new shared-universe setting and new creative partners--even if many of his regular collaborators followed him to work on his various Jinxworld comics. I was personally a little wary and a little hopeful about what Bendis' Superman comics might be like, if they would actually feel fresh and new, or just like reading Bendis' Marvel comics, but with a different group of characters. Thus far, I've been quite happy to find that his first DC comics that I've read--The Man of Steel, Young Justice #1--were pretty good, and not just the Bendis formula applied to new source material.

So it's somewhat disappointing to find that Naomi #1, the first issue of his fourth ongoing title set in the DC Universe, is so...Bendis-y. On the other hand, I'm glad it's the first of his books to feel so rote.

It's kind of too bad though, because Naomi was always going to have a somewhat uphill climb. It stars and is named after a brand-new character, which isn't generally a formula for hit pop comics in the Big Two's ecosystem. It has a star creator in Bendis, but he's the main creative draw--his co-writer David F. Walker and artist Jamal Campbell are talented enough, but hardly on Bendis' tier of creator celebrities--and this is just one of the nine different Bendis-written comics that DC is publishing this month (It's part of the "pop-up" imprint Wonder Comics, which seems focused on young heroes, but is the only one of the four books not based on pre-established characters). And its premise is that the premise is secret; if you read long enough, you'll figure out what the book is about. The cover blurb promises "The Biggest New Mystery in The DC Universe"--don't tell Scott Snyder and company's Justice League, which is exploring the biggest mystery in the DC Mutiverse!--over an image of a character putting together one of those yarn, pin and clue things that people trying to crack conspiracies in movies and TV shows are forever building to show how obsessed they are.

In other words, a bit of a tough sell.

So the Bendisishness of it is somewhat unfortunate. The first issue passes with little more revealed about the premise or the main character or the events of the series than you could glean from the solicitation copy for the first issue (or the preview of the book, running in many other DC comics). 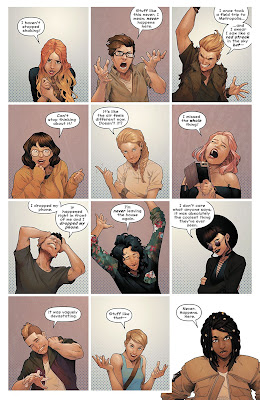 There are pages that are essentially wasted ones, in which Campbell draws grids of various characters offering reactions to a big event, meaning 12 panels of people saying more-or-less random things like "Can't stop thinking abut it!" and "I missed the whole thing!" as if they were speaking directly to a camera on a reality show.

There is a five-panel walk-and-talk sequence that fills an entire two-page spread, in which three characters deliver 35 lines of dialogue, laid out in those familiar "Bendis chains," in which dialogue balloons are strung together on wide, arcing tails in order to make room for the other characters' dialogue balloons.

That it is all talking and no action isn't necessarily a bad thing--it's not like this is Action Comics, another of Bendis' DC titles, after all--but the fact that there's no real context to these conversations, that no time is taken to let us know anything about the speakers, only makes the conversations feel artificial and unnatural, the work of someone scripting a comic book, rather than something organic that readers might be able to trick themselves into thinking is real enough to escape into for a few minutes.

Even more egregious? The why of Naomi's interest in Superman's brief visit to her home town and the history of superhumans there is explained at the reader by Naomi's therapist, who tells her she has "the Superman Complex...He's the fantasy of every child...Especially every adopted child. Not to be Superman," but rather to grow up and find out that you're special, just like the adopted last son of Krypton.

This scene struck me as remarkably lazy, as that seems to be how we find out that Naomi is adopted--her parents don't appear in this issue, nor does her home--and that she yearns to be special.

Granted, these are just the first 25 pages of an ongoing serial comic, and things might get better as the issues pile up. But, if nothing else, the first issue of a comic should make you want to read the second issue of that comic. Naomi instead makes me think "Maybe this will turn out to be interesting once the entire story has been collected into a trade in six months," which is what one might have said upon reading the Bendis-scripted comics of 19 years ago.

Bendis is a good comic book writer, and the work of he and his collaborators here is professional, but this is not a very well-written comic book.
Posted by Caleb at 5:52 PM