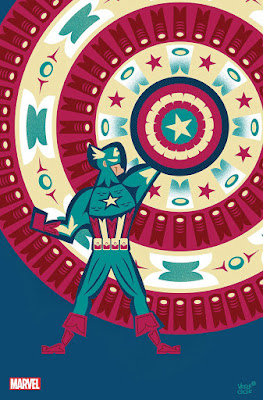 Based solely on what the two biggest publishing companies in the North American direct market have solicited for the month of November, Marvel Entertainment's comics line seems a lot healthier than DC's...or, at least, they have far more books of various types, they have far fewer cancellations and no one has used the word "bloodbath" to describe what might be going on behind the scenes there.

Although I suppose one could also look at Marvel's offerings, which include some 14 X-Men books and eight Spider- books and one book with over 35 fucking variant cover and also conclude it's anything but healthy.

I suppose health is, like beauty, in the eye of the beholder...?

At least Marvel, unlike DC, is neither publishing new material nor reprinting anything from Warren Ellis, or any of the other bad actors prominently featured in Abhay Khosla's The Comics Journal series on sexual harassment and exploitation in the comics industry (although I do see at least one name Khosla singled out for criticism for enabling Ellis and not doing enough to stand-up for exploited women in the industry getting plenty of high-profile work for the publisher).

One legitimately cool thing Marvel has to offer in November are Jeffrey Veregge's "Native American heritage tribute" variant covers. That's one of them at the top of the post. Here are some more: 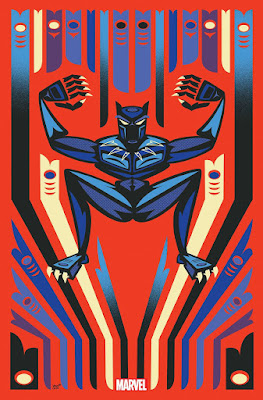 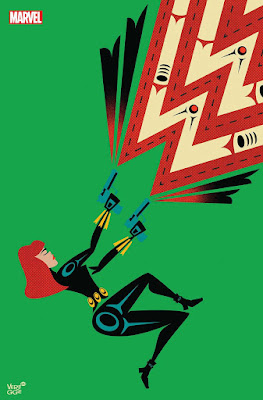 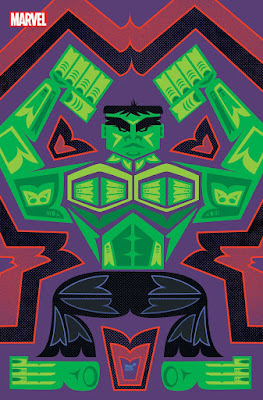 Now let's see what else Marvel has to offer...


AMAZING SPIDER-MAN #52.LR
NICK SPENCER & MATTHEW ROSENBERG (W) • FEDERICO VICENTINI (A)
Cover by MARCELO FERREIRA
...
LAST REMAINS TIE-IN!
Doctor Strange is now bound to this Kindred problem and he recruits someone to help.
Even with Strange and his recruit, the Order of the Web will be lucky if they survive!
32 PGS./Rated T+ …$3.99

Oh, Marvel's still doing that dumb thing with the numbering of ASM during the "Last Remains" crossover for some reason. 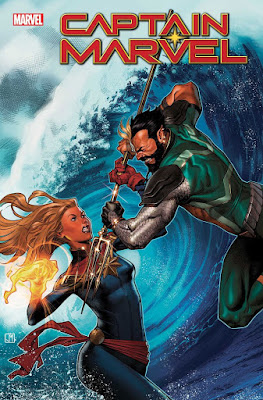 Yikes. That's not supposed to be Namor, is it? I wasn't fond of his recent-ish makeover, the one where he was given black, crustacean-like armor on his arms and shoulder and nowhere else, but I did eventually get kinda sorta used to it. But this looks much, much worse. If that is Namor, I'm not sure there's any getting used to that... 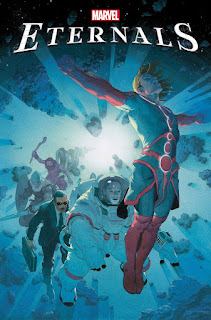 Is it a controversial opinion to say that no comic book should have more variant covers than it has interior pages? Eternals has 37 variant covers. Thirty-seven! On an Eternals comic! I would be shocked beyond belief if this series even lasts 37 issues. Or, like, half that. Jack Kirby's original 1976 Eternals, the last of his cosmic gods-as-superheroes comics stories, lasted only 19 issues. Marvel's never even attempted anything more ambitious than a limited series with those characters since. Thirty-seven covers. Jesus. 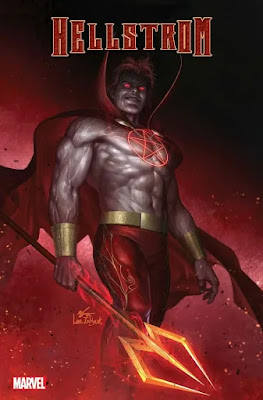 HELLSTROM: MARVEL TALES #1
Written by GARY FRIEDRICH, JOHN WARNER, RICHARD HOWELL & RAFAEL NIEVES
Penciled by TOM SUTTON, JIM MOONEY RICHARD HOWELL & MICHAEL BAIR
Cover by INHYUK LEE
...
Daimon Hellstrom, the Son of Satan himself, burns his way into your brain as we celebrate the legacy of the House of Ideas with MARVEL TALES! This anthology series shines a spotlight on fan-favorite characters, features timeless stories and highlights some of Marvel’s most impressive talent from the past eight decades. First, the Son of Satan makes his daring debut as a tormented exorcist in GHOST RIDER (1973) #1! Next, Daimon enters his father’s domain and faces an unholy family reunion in SON OF SATAN #1! A marriage made in heaven takes center stage as Daimon and his then-wife, Patsy Walker, star in MARVEL FANFARE (1982) #59! And there’ll be hell to pay when Daimon, now an occult investigator, comes face-to-face with his own demonic doppelganger in HELLSTORM: PRINCE OF LIES #1!
88 PGS./Rated T+ …$7.99
ORDER USING MAR201016

Hey, Hellstrom finally looks both cool and like himself again...but then, I guess this is a collection of classic stories, so maybe that's not too surprising... 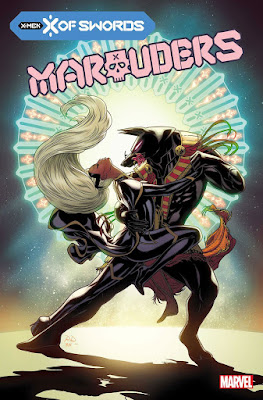 Wait, is Storm into furries now...? Is that the logical next step after marrying a guy who dresses up like a cat all day? It must be love. There is no other way to explain the rose in that dog fursona's mouth... 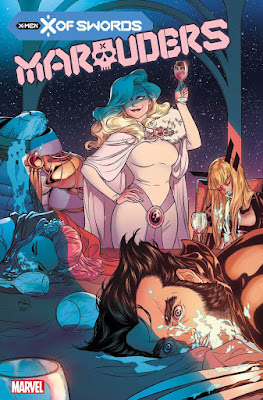 I have no idea how much milk the X-Men drank, but it must have been a lot. 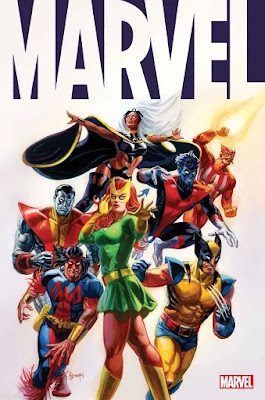 MARVEL #2 (Of 6)
ALEX ROSS, DAN BRERETON, STEVE DARNALL, PAOLO RIVERA & ERIC POWELL (W)
ALEX ROSS, ERIC POWELL, PAOLO RIVERA & DAN BRERETON (A) • Cover by ALEX ROSS
Variant Cover by DAN BRERETON – FEB200898
Another artist extravaganza overseen by the master; Alex Ross! In this issue, the X–Men old and new grapple with the swelling of their ranks in a story by Dan Brereton, the Thing, Spider–Man and Doctor Doom contend for the most coveted object on the planet in a tale by Eric Powell, and the Vision pushes himself to the limit in order to save a life in an adventure by Paolo Rivera! All wrapped in a framing sequence painted by Alex and scripted by Steve Darnall!
40 PGS./Rated T …$4.99
ORDER USING FEB200897

I don't like the vague-to-the-point-of-meaningless title, but I do like Dan Brereton art. I'll be looking forward to the collected version of this. 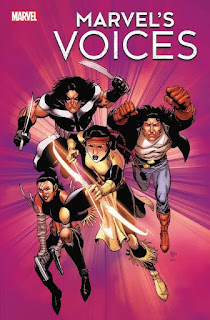 This is interesting. The original Marvel's Voices comic, which is also being reprinted in November, wasn't that great, but it had its moments. Unfortunately, there were so many characters and so many creators involved, that the super-short—sometimes no more than a page—stories meant that moments were all that it really could have. I wonder if this will be the same, or if Marvel's relatively fewer indigenous characters will mean that the stories will be of greater length...?

One thing that I think could prove exciting about this is that I am completely unfamiliar with the work of any of the creators (I read a Star Wars prose novel Roanhorse wrote, and I've seen Jeffrey Veregge's covers and...that's it), so this is a probably a good place to look for new creators. 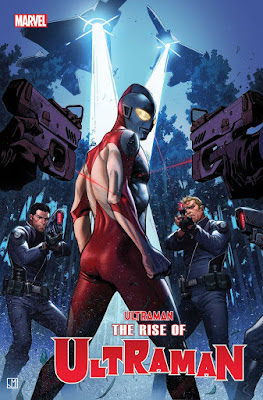 
U.S.AGENT #1 (OF 5)
Christopher Priest (W) • Stefano Landini (A) • Cover by Marco Checchetto
...
VARIANT COVER BY PATCH ZIRCHER
CHRISTOPHER PRIEST & STEFANO LANDINI BRING BACK THE SUPER-SOLDIER YOU LOVE TO HATE!
“American Zealot” Chapter 1 of 5: John Walker, the former Super Patriot, has been stripped of his official USAgent status and is now operating as an independent government contractor protecting government covert interests. His latest protection detail draws him into a conflict between a small town and the corporate giant trying to destroy it. John acquires a new partner and new enemy along the way while being haunted by ghosts from his past and confronting challenges to his future.
32 PGS./Rated T+ …$3.99

D'oh! I didn't notice the mention of "Patch Zircher" the first time I read through these. He...did not come out looking great in Khosla's TCJ report, where he appears because he offered his "take" on Cameron Stewart's pursuit of teenage girls and young women. I had originally just pulled this one out because Priest is always an interesting writer, and while  I'm not terribly familiar with the USAgent character in any real detail, having missed the first few decades worth of his appearances, he seems like one that a writer like Priest could have some fun with.

But if you wanted to avoid this because of Zircher being kind of a terrible person in public, who could blame you? Not I. 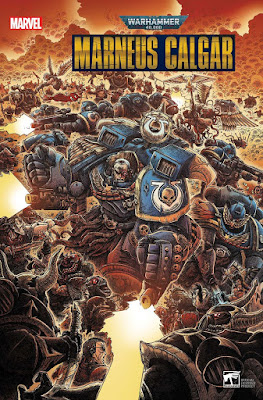 WARHAMMER 40,000: MARNEUS CALGAR #2 (OF 5)
KIERON GILLEN (W) • JACEN BURROWS (A) • Cover by JAMES STOKOE
...
DESCENT INTO CHAOS!
The untold origin of MARNEUS CALGAR continues as a startling discovery is made on the moon of NOVA THULIUM!
But will the young Marneus face his first triumph…or a soul-shattering loss?
A shocking revelation in the history of the legendary Chapter Master of the Ultramarines that will forever change what you thought you knew!
32 PGS./Parental Advisory …$4.99

I don't rightly know what "Warhammer" is exactly. I've seen paperback novels of it. Is it a video game franchise? Or a role-playing game? Marvel's previously published Warhammer comics, but this is the first time I actually stopped and took any notice beyond, "That is a thing that exists," because it has a James Stokoe cover. Behond the power of James Stokoe art! 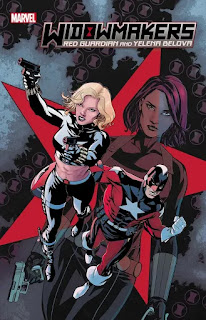 WIDOWMAKERS: RED GUARDIAN AND YELENA BELOVA #1
DEVIN GRAYSON (W) • Michele Bandini (A) Cover by MIKE MCKONE
...
Devin Grayson, one of the creators of Yelena Belova — the Red Room recruit who once nearly killed Natasha Romanoff — returns with a brand–new story drawn by rising star Michele Bandini! Yelena has spent years trying to figure out who she is. Once she thought the Black Widow mantle was her destiny, but fate had other plans. Now the past is catching up with her — and with Alexi Shostakov, a.k.a. the Red Guardian! Alexi has worn many titles, including husband to Natasha, but while the Widow played her avenging games, the Red Guardian waited in the shadows. Now a new day is dawning — and this time, no one will stand in his way.
40 PGS./ONE–SHOT/ Rated T …$4.99
ORDER USING FEB200833

Marvel's also releasing a collection of the X-Men: Evolution tie-in comic that Grayson wrote for a bit. I read all of the Grayson-written issues of that series, basically just because she wrote them, and I remember nothing at all about them, so I don't think they were very good. Or, at least, not very memorable. (I think they played baseball in one? But I guess you could say that of many runs on X-Men, no?) 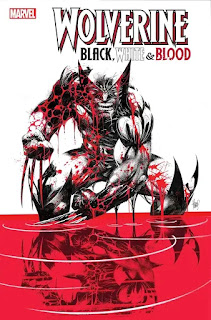 WOLVERINE: BLACK, WHITE & BLOOD #1 (Of 4)
GERRY DUGGAN, DECLAN SHALVEY, MATTHEW ROSENBERG (W)
ADAM KUBERT, DECLAN SHALVEY, JOSHUA CASSARA (A)
Cover by ADAM KUBERT
VARIANT COVER BY ADAM KUBERT
VARIANT COVER BY RON GARNEY
VARIANT COVER BY TONY DANIEL
VARIANT COVER BY GEORGE PEREZ
TOP MARVEL TALENT SINK THEIR CLAWS INTO ALL-NEW
WOLVERINE TALES AND THEY’RE BLOODIER THAN EVER!
LOGAN. PATCH. WEAPON X. WOLVERINE. The mysterious mutant has gone by many names and lived many different lives. Now, experience ALL-NEW untold tales of the best there is through the lens of an all-star cast of creators, in the unadulterated black and white format (with a healthy splash of blood red all over)!
Return to the Weapon X program with Gerry Duggan and Adam Kubert, and a new revelation from Wolverine’s shattered memories. Join Matthew Rosenberg and Joshua Cassara on an explosive deep-cover spy mission from Wolverine’s association with NICK FURY. Head into the wilds with writer/artist Declan Shalvey as Logan finds himself in the crossfire of a deadly trap! This is the one you’ve been waiting for, bub.
40 PGS./Parental Advisory …$4.99

I yield the remainder of my time to Graeme:

As for Warhammer 40K, a reductive description of the setting would be "Space Marines versus Space Orks versus Space Elves (Eldar). Over the decades the setting has acquired a ton of lore and has had spin off novels, video games, RPGs, and yes comic books.