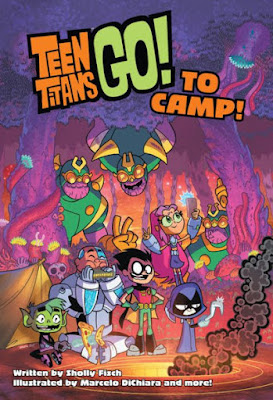 Sholly Fisch and Marcelo DiChiara send the Teen Titans to Camp Apokolips in their original graphic novel, Teen Titans Go! To Camp!, which offers a good enough excuse to play with Jack Kirby's Fourth World characters, embedding them into the absurdly silly, crazy-paced milieu of the Teen Titans Go! cartoon (which the book approximates about as well as a comic book can). A particularly fun feature is the letters home from camp the Titans and various other campers write, which are each drawn by a different, excellent guest artist, few of whom seem to even attempt to ape the style of the show.

There are plenty of effective jokes in the book, but these ones are my own personal favorites...

1.) Martian Manhunter eating a cookie. When the Teen Titans flash back to their disastrous experience at the Justice League's Camp Super Friends, they are greeted by the entire League line-up. J'onn J'onnz, the manhunter from Mars, is drawn by artist Marcelo DiChiara chomping on an over-sized chocolate sandwich cookie.

This isn't a joke as much as it is a callback to previous light-hearted Justice League stories featuring J'onn, like those of Keith Giffen, J.M. DeMatteis and company's five-year run on the Justice League franchise during the "JLI" era. That was when J'onn's love of Earth's chocolate sandwich cookies was first revealed (Originally his brand of choice was Oreo, but it was later retconned into "Chocos"). This panel basically just serves as a reminder of a bunch of past fun stories featuring the character, but that was more than enough to make it one of my favorite panels in the book.

As far as characterization goes, "likes cookies" might not be the deepest of traits, but it is certainly a relatable one. 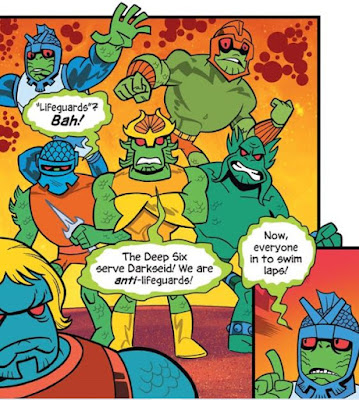 2.) The Deep Six! There are several more minor Jack Kirby-created characters appearing in various capacities at Granny Goodness' summer camp—Devilance The Pursuer provides transportation, Mantis works in the cafeteria—but it was the appearance of The Deep Six that most delighted me. And that they serve as lifeguards, er, anti-lifeguards? Even better. 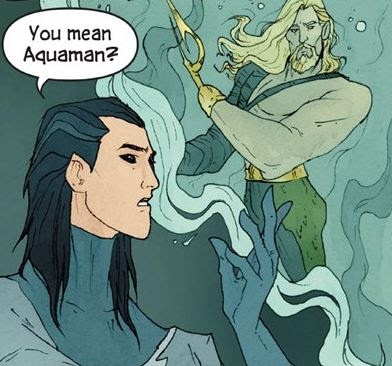 3.) "You mean Aquaman?" At the end of the third chapter, guest artist Abigail Larson draws Raven's letter home to her father, Trigon The Terrible. In it, she tells him how they spent the first night at camp sitting around the campfire, telling spooky stories. Billy Numerous attempts to tell the one about the guy with a hook for a hand, but, well, Aqualad doesn't find guys with hooks for hands to be particularly scary. This letter is one of several that is notable for how sharply the art style contrasts with DiChaiara's, which adheres to the look of the show. 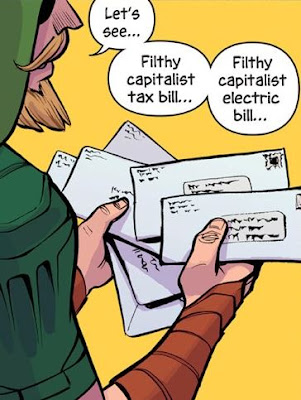 4.) Green Arrow is a communist. Leila del Duca illustrates Speedy's letter home to Green Arrow, a sequence that begins with a page of Green Arrow checking his mail, which includes this gem of a panel. 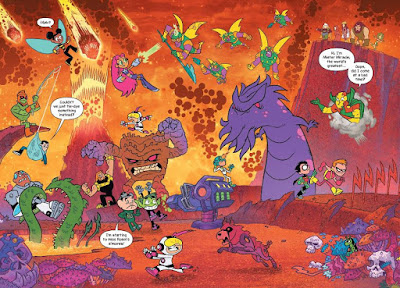 5.) Where's Mr. Mind? As the story reaches its climax, DiChiara treats us to this two-page spread featuring all of the campers dealing with various Apokalyptian traps, monsters and villains as they seek to complete the obstacle course. Can you find Captain Marvel's archnemesis, one of the universe's greatest villains and the founder of The Monster Society of Evil?

The villainous worm makes no other appearance throughout the book, but he does get drawn into this spread. And really, given how little space the little guy takes up, and how awesome he is, why wouldn't you draw him into such a panel? Hell, I'm surprised Mr. Mind doesn't get drawn into every DC Comic...
Posted by Caleb at 7:11 PM