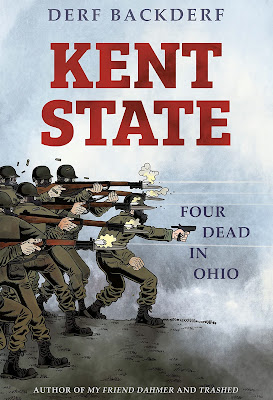 When it was originally set for release in April of this year, Derf Backderf’s Kent State: Four Dead In Ohio was a substantial work of comics journalism and history, told as a suspenseful, even gripping narrative detailing the three days leading up to the 1970 massacre of four students on an American college campus, a shocking inflection point in the anti-war movement.

Kent State is still all of those things, of course, but it reads a bit differently now than it did in the spring. While the plan was to have the book out in time for the 50th anniversary of the tragedy, publisher Abrams ComicsArt pushed the release back to September due to the pandemic. In the months between, the country has experienced an unprecedented movement sparked by police violence against Black people, a movement often violently responded to by overzealous, overly-militarized police forces across the country. In several instances, the National Guards was even called on to help disperse protesters.

So now Derf’s Kent State has a new and unfortunate valence. It’s been 50 years since the shooting, and the government still has guns turned on its own populace, a populace still sharply divided over issues of social justice.The present haunts Derf’s history, making the book troublingly vital.

That history is this: On May 4, 1970, members of the Ohio National Guard turned their bayonet-tipped guns on college students at Kent State University, firing 67 shots in 13 seconds into a crowd of protesters and bystanders, a deadly barrage that killed four students and wounded nine others.

The format of Kent State is quite similar to that of Derf’s best-known work, 2012’s My Friend Dahmer, each being heavily researched true story comics set in Ohio, with Derf providing copious, meticulous notes explaining the source for almost every panel and every line of dialogue on every page. Where there are discrepancies in the record, the notes explain why Derf made the choices he did, which, more often than not, means not committing to a particular version of a story. (The best example of this in Kent State probably comes during a one-page scene covering a 10 a.m.,May 4th meeting between KSU President Robert White, the city of Kent’s Mayor LeRoy Satrom and General Robert Canterbury; Derf draws the men in conversation, but there’s no dialogue, just narration boxes explaining their later, conflicting accounts of what was said.)

Also as in Dahmer, Kent State derives an intense degree of suspense from the readers’ foreknowledge of where exactly the story is going from the very first pages—or, hell, from the subtitle. Of course, Derf doesn’t begin his story on May 1st simply to generate suspense, nor even just to properly explain the context of the shootings, including the many, diverse factors that may have played some role.

Rather, doing so allows him and the readers to spend time with Allison Krause, Jeff Miller, Sandy Scheuer and Bill Schroeder, the four students who were killed. We therefore get a sense of who the students were, what their lives were like, what brought them to the commons that day and what they thought about doing with the rest of their lives which, of course, would now never come.

Like his Dahmer and his 2015 Trashed, both of which existed in earlier, rougher versions before their final Abrams releases, Kent State is drawn in Derf’s more revised and refined style, a marked contrast from his style in his strip The City and his earlier narrative comics work. Despite the hard lean in the direction of representation, helped enormously by the thoroughly researched settings, props and backgrounds, the artist’s decades as an alternative cartoonist remains apparent at the core of his figures and, in particular, their highly expressive faces. There’s an element of caricature to the characters, and as softened as that element may be, it helps give the graphic novel the general aesthetic feel of a political cartoon, even if the point-of-view is more detached and objective. Kent State is more front page than editorial page.

Derf spends a full fifteen pages on the 13 seconds of the shooting, detailing exactly what happened to each and every one of the students shot during that time. He starts with Miller who, in a gory three-panel sequence, has a bullet rip through his open, chanting mouth, spinning him completely around before he hits the ground, dead, the words appearing next to the figure within the panels describing the damage as it is done.

It is one aspect of the book that may prove controversial—it’s certainly hard to read—but it also drives home the savagery of the National Guard shooting students in a way that words alone can’t.

In addition to putting faces and lives to the names of those killed, the sequence also illustrates that the simple words of history can only blandly describe reality. For example, it’s one thing to hear that nine students were “wounded,” but quite another to see that among those are protester Tom Grace, whose foot was nearly ripped off his ankle when he was shot while fleeing, or bystander Dean Kahler, who dove to the ground for safety when the shooting started, only to have a bullet strike his back and paralyze him for life.

When the National Guard—or federal, local or police law enforcement—shoot at peaceful protesters these days, they do so with so-called “less-lethal” weaponry, like rubber bullets, bean bags, tear gas and pepper spray. Are such projectiles better than bullets? I suppose, but they can still kill, paralyze and maim their targets. That hardly counts as progress; the core problem seems to be the act of shooting at peaceful protesters at all, not what is being shot at them.