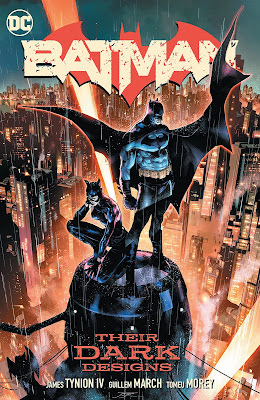 I wrote a kinda sorta review of Batman: Their Dark Designs—kinda sorta reviews being my specialty at EDILW!—in the previous post, but I had a lot more to say about it than I had room to do so in that particular format. Although I can't say I had a lot more of any real worth to say about it, as I mostly just noticed a lot of allusions to '90s Batman comics and some buggy continuity. But I thought I'd put it all down in a separate post because why not? If you have a copy of the collection handy, feel free to follow along...!
1.) Gunsmith, not Gunhawk. When I first saw the above panel, I assumed that Chuck Dixon and Graham Nolan's gun-toting villain with an American flag bandana had gotten a more menacing design update by artist Tony S. Daniel, but this is, in fact, Gunsmith, not Gunhawk, the villain I was thinking of.

Gunhawk was an original creation of the Dixon/Nolan team, and he first appeared in 1994's Detective Comics #674, during Jean-Paul Valley's brief stint as Batman. Gunhawk's costume was sort of mess, pairing green and black spandex with a target-like icon suggestive of Deadshot's, a visor like Cyclops' and, most memorably for me, an American flag bandana worn over his head. He had a partner/girlfriend named—sigh—Gunbunny.