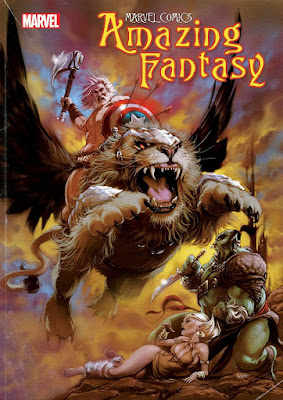 Oh wait, no; that Battlecat has wings. Must be some other axe-wielding blonde barbarian on the cover of Marvel's Amazing Fantasy, which sure sounds like a let-Kaare-Andrews-do-whatever-he-wants miniseries. That seems like a good plan. 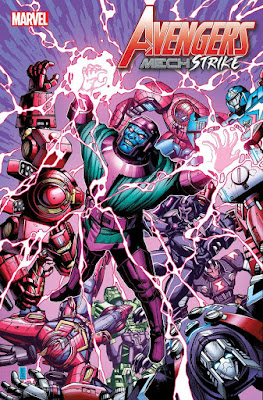 Wait. Are the mechs in Avengers Mech Strike...small...? Or is Kang giant? Or did artist Kei Zama just use some artistic license on the cover for Avengers Mech Strike #5, the final issue of the latest series involving Avengers mecha suits...? I guess if the series is ending then the trade is right around the corner, and I can find out then. 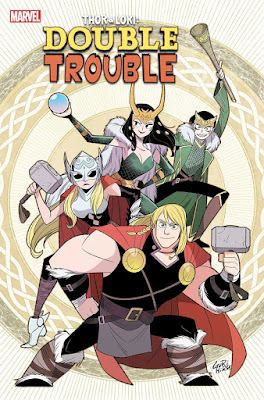 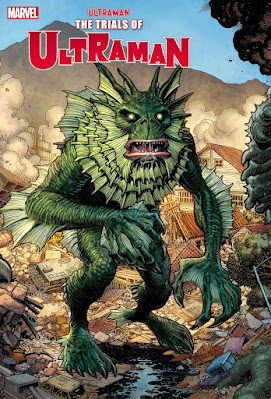 I'm probably never going to read any of Marvel's Ultraman comics, like July's The Trials of Ultraman #4, for example, but goddam I do like seeing Arthur Adams draw monsters for the covers. 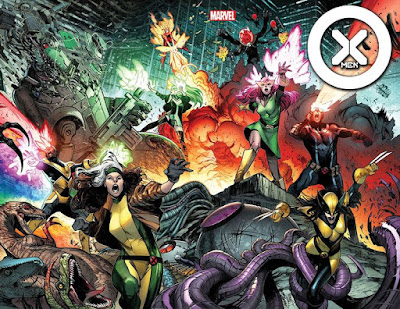 There's a ne X-Men #1 already...? Jeez, how long has it been since the relaunch? A year...? Two...? I seriously haven't been keeping track, but just looking at a few random X-titles like, say, Marauders or Excalibur, they will only be publishing their 22nd issue come July, so the big, ballhyhooed X-Men era by Jonathan Hickman doesn't seem to have lasted all that long...although I guess "Krakoa" is mentioned in the solicitation copy for the book, which will be written by Gerry Duggan and drawn by Pepe Larraz, so maybe the status quo is staying the same, even if they're relaunching the flagship title with a new #1 and a million variant covers...
...
Ummm, I guess that's all I had to say about any of the books Marvel solicited for release in July, then? There were a few bad jokes that occurred to me, but I didn't make them because certain kinds of jokes about solicits are harder to make now that I can't simply cut-and-paste the solicitation copy.
Last month I didn't even write about Marvel's June solicits, and no one noticed! Or no one said anything, anyway.
So hey, while I've got you here, should I just quit bothering with Marvel's solicitations all together, or is it still worth your while getting a very short post like this one? Would it be better to fold them into one big post along with the DC solicits, which I always have far more to say about? If you have any input to share, I'd love to hear it. Thanks!

I like them separate, even if short. Besides reminding me when they come out, you usually have takes on the weird stuff that catches my eye, and it helps having it pulled out of the huge list.
Plus they're highly entertaining.

Oh yes, I noticed the missing post but it's harder to comment on a post that's not there.
I'm not a fan of the very long posts, especially because the end asterisk points are so far away I've normally forgotten what they were referring to by the time I reach them.

I did notice, and patiently visited the site waiting for your Marvel post. I really enjoy your writing, so I'm always looking for your latest. I would be down for a Month of Previews all in post, which would not only give you the opportunity to comment on the output of other companies, but also highlight upcoming independent books like the sort you tend to review on other sites. No matter your choice, as a fan I'd just like to see more posts!