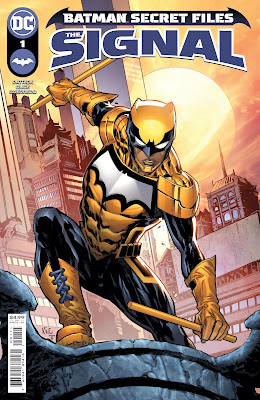 Batman: Secret Files: The Signal #1 is a one-shot starring Duke Thomas, a character I like a lot, and whose costume I think is pretty okay and who I even think has a neat raison d'etre (he's Gotham City's day-time Batman), but man, I loathe that codename, The Signal, especially for a Bat-character, given that "the signal" already has a pretty specific meaning in Batman comics. (As for better codenames, "Golden Bat" or "Gold Bat" go with the color scheme; "Echo" or "Sonar" go with the powers and are vaguely bat-like; "Shining Knight" contrasts with Dark Knight and fits the knight-theme Duke used as the justification for his name, "the signal" being the "first on the field"*).
Anyway, I imagine there would be a ton of crime in the day time in Gotham City. Like, if you were a bank robber, mugger or drug dealer, wouldn't you feel much safer committing your crimes in broad daylight, where all you had to worry about was the police, rather than a scary, violent superhero with his own stealth jet?
The Signal is by Tony Patrick and Christian Duce; there's another Batman: Secret Files special starring "the Violet Vengeance," The Huntress by Detective Comics writer Mariko Tamaki and David Lapham (Wait, David Lapham? Really?!).
I think these might be the only books DC solicited this month I'll pre-order...with the possible exception of The Swamp Thing, below. 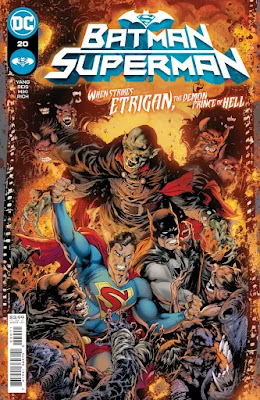 Based on his clothing and skin color, I had no idea that was supposed to be Etrigan the Demon on Ivan Reis and Danny Miki's cover for Batman/Superman #20 until I read the cover copy. That...is probably not a good indication that this is a quality image of Etrigan The Demon. From a distance he looks like Nosferatu; up close, he looks like Nosferatu going to a fancy dress party as a pirate. 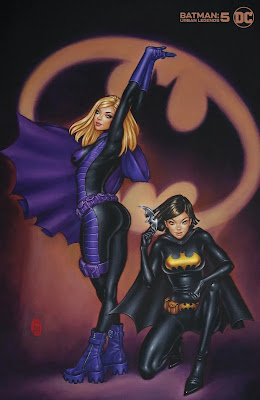 Batman: Urban Legends #5 features four stories starring Red Hood Jason Todd, Grifter (for some reason), Tim Drake (um, just going by Tim Drake, I guess) and "Batgirls": Stephanie Brown, Cassandra Cain and Oracle. I wonder if I can just pre-order one-fourth of this issue...? There are multiple covers, but this is the one featuring the so-called Batgirls. 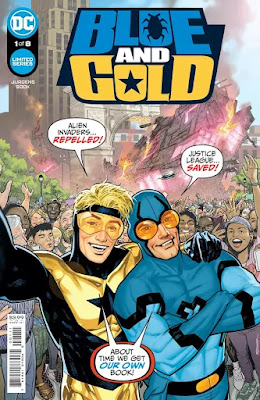 Dan Jurgens and Ryan Sook unite for Blue and Gold #1, launching a new series co-starring the old JLI bros Booster Gold and Blue Beetle. The premise seems to be that the wealthy, tech-savvy Beetle will be helping Booster become famous via his superheroics, and it sounds pretty dated actually (I mean, Blood Pack did superhero team-as-reality show 30 years ago or so, and I'd be surprised if they were the first), but I like these characters a lot, and Jurgens is obviously a good choice to write.
Sook's a pretty great artist, but his super-realistic style seems an unlikely fit for what one imagines will be a humor-focused book. I guess we'll see how it all works out. 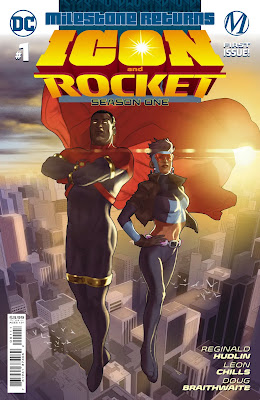 Milestone returns this month with Icon and Rocket (Season One) #1, and guys, I can't tell you how much I hate it when comics refer to themselves by "season"; it just feels tacky and desperate. Yeah, DC and the creators of this book—writer Reginald Hudlin and artist Dough Braithwaite—probably do want to make a TV show based on the Milestone characters but, like, play it cool guys...
As I mentioned previously, I'm not crazy about the new costume design, as the character looks off without the green of his old cape. It would be like an all-blue Superman costume, you know?

And as I also mentioned previously, but will mention again in the hopes of willing it into existence, I hope DC collects the entirety of the original Icon run, and some of the other Milestone comics (like the "Worlds Collide" crossover with the Superman books, for example). 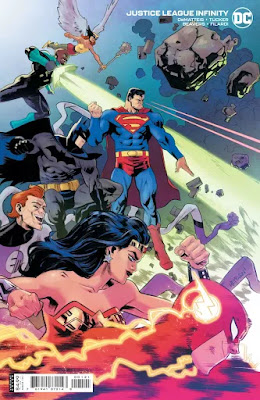 I guess someone at DC realized that if they can do a comic set in the Batman: The Animated Series continuity, there's no reason why they can't also do one set in the Justice League/Justice League Unlimited one. Hence Justice League Infinity #1, by writers J. M. DeMatteis and James Tucker and artist Ethen Beavers (so despite the style of the two solicited covers, I expect the insides to match the design of the cartoon).
Hopefully the presence of Elongated Man on Scott Hepburn's variant cover means this series will be set during the Unlimited part of the Justice League cartoons, when the League consisted of just about every single DC superhero (or at least whichever ones the producers and creators wanted to use in a story).
I've been digging the new collections of DC's old comics based on this cartoon, so I'm all far DC producing new comics in that mold. 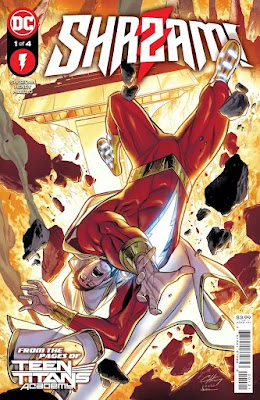 I'm glad to see Shazam #1 solicited, as I think there should always be a Captain Marvel/Shazam series (just like I think Captain Marvel should always be on the Justice League), although the creative team of Tim Sheridan and Clayton Henry isn't one that makes this a must-buy for me (I do like Henry's art, though; I don't think I've ever read anything Sheridan has written). I'm also a little leery of the "From the pages of Teen Titans Academy" slug, having not read any of that. 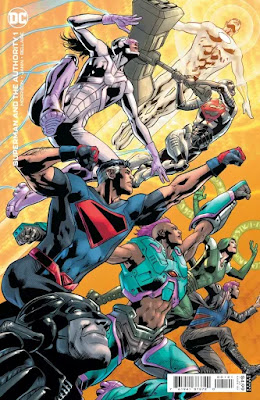 Well, this is weird. Grant Morrison and Mikel Janin will team for Superman and The Authority,  a book pairing DC's premeire hero Superman with The Authority, creepy sex creep Warren Ellis and Bryan Hitch's StormWatch spin-off team, a team that reached the zenith of their popularity  some 20 years ago.
In fact, writer Joe Kelly created his own faux-Authority for 2001 Action Comics story "What's So Funny About Truth, Justice and The American Way?", a now-classic story in which Superman fought The Authority, although Kelly and company named their version of the team "The Elite." That group of  characters hung around the Superman books and the DCU quite a bit, including co-starring in the Kelly-wtitten Justice League Elite series from 2004-2005.
All of which is to say this book seems to be a dated affair right out of the gate, especially since this version of The Authority is being lead by Manchester Black, the Jenny Sparks analogue that Kelly created to lead his Elite (Based on Hitch's cover, it looks like the only Authority characters in the book are going to be Apollo and Midnighter, while we have The Elite's Manchester Black and what appears to be the Natasha Irons version of Steel, maybe The Enchantress and a couple of characters I don't recognize; I guess the one female character).
In other words, this seems like a title that would have been a pretty popular idea 15-20 years ago, but now just seems kind of a head-scratcher. If it were anyone other than Morrison at the helm, I'd have a hard time imagining it had anything new to say about the tensions between iconic, Superman-like characters of impeccable moral rectitude and more cynical, '00s-style amoral anti-heroes but, well, that guys has earned the benefit of the doubt at this point in his career. 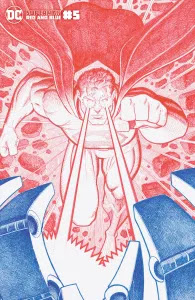 I really like this Superman: Red & Blue #5 cover by Art Adams. 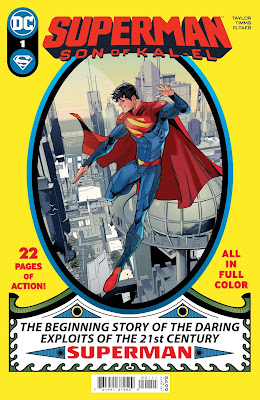 Superman: Son of Kal-El strikes me as a rather lousy name for a new Superman title, especially if it's replacing one simply called "Superman", but I suppose they wanted to add something to differentiate it from Superman. I'm officially so far behind on Superman comics that I still don't know why Jonathan Kent suddenly, rapidly aged into and through puberty, but that struck me as a not very interesting idea, particularly since we already have a couple of teenage Supermen flying around the DCU (Young Justice's Superboy, New Super-Man Kong Kenan).
The new title will be by writer Tom Taylor, a talent who has definitely paid his dues on goofy "dark" DC books like Injustice and DCeased and earned a place on top-tier books, and artist John Timms, who has bounced around a couple of higher-profile DC books of late (Justice League, Batman).
I've got a lot of catching up to do before I'll be ready for this in trade, however.
I'm not a fan of that costume, which screams "New 52!", but then I suppose, as with the sub-title, they wanted to differentiate the new Superman from his dad. 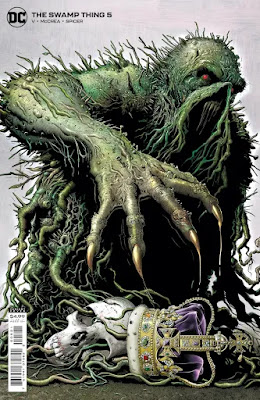 I feel like I've probably read all the Swamp Thing comics I need to read in one life time, but it's well worth noting that The Swamp Thing #5 features John McCrea art inside, with Brian Bolland art on the cover. That's a lot of great art for a single issue. 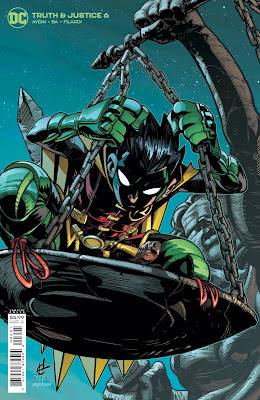 I continue not to know just what the hell Truth & Justice is, exactly, but the July's Truth & Justice #6 features Robin Damian Wayne and has a nice variant cover by the great Damion Scott, an artist whose work I never tire of looking at. 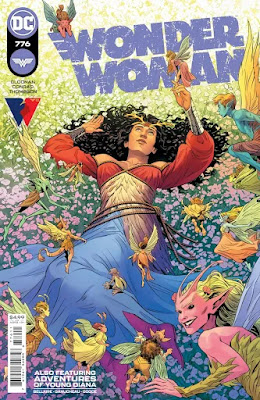 Please note that Wonder Woman #776 will feature art by the great Jill Thompson (the cover above is by the book's co-writer Becky Cloonan, however). 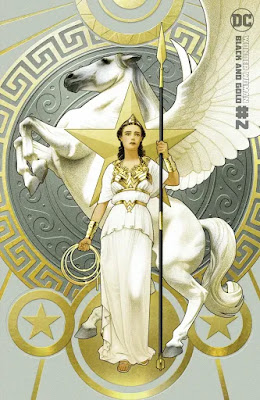 Wonder Woman Black & Gold #2 will include a story by the prolific cartoonist Tillie Walden (Spinning, Are You Listening?, On a Sunbeam), among other such contributors as Jamie McKelvie, Markio Tamaki and Ashley Woods.
*I'm also in favor of changing his costume from gold to white and calling him "White Knight," which contrasts nicely with "Dark Knight."
Posted by Caleb at 9:12 AM

Just thought I should mention that Morrison now uses non-gender pronouns, in case you want to update your post about them. Cheers!

That Son of Superman costume really strikes me as a sort of Superman One Million vibe (just with the original logo instead of the minimalist pips on the chest) moreso than the New 52. Interesting way to suggest “future” for the character.

I’m really excited for the Batgirls story in Urban Legends - it sounds pretty fun - but the way Steph is drawn on that cover is making me so mad. What the hell is that?