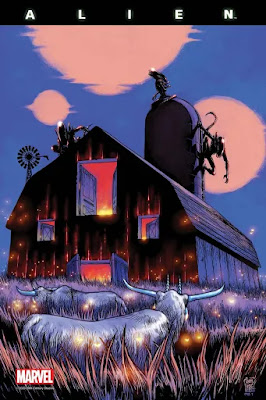 I like this cover for Alien #7, but I wonder if it would be more effective with just one of those aliens on the barn, making for a sharper contrast between the bucolic setting and the aliens from Alien... 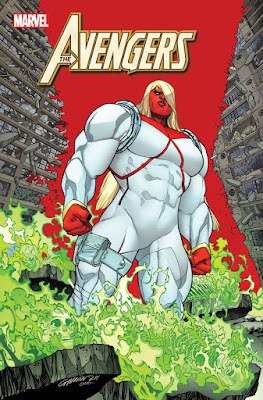 Oh come now, a darker color might go better with Jennifer Walters' skin tone—be it white or green or red—but I'd hardly call going blonde being "transformed into something terrifying," as the solicitation copy for Avengers #48 does... 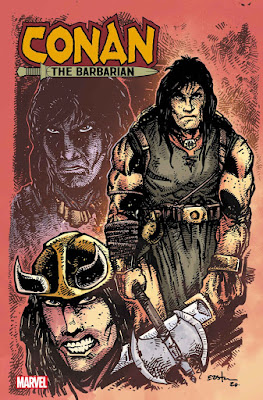 Conan The Barbarian #25  is apparently in the neighborhood of an anniversary issue, and so it's a $5, 40-page anthology issue. Writers include Larry Hama and Christopher Priest, while one of the artists involved is the great Marcos Martin. As for the cover, that's obviously by long-time Conan fan Kevin Eastman, who I still haven't gotten used to seeing drawing non-TMNT characters. I suspect seeing  him drawing Marvel and DC super-comics characters is always going to be a thrill for me. 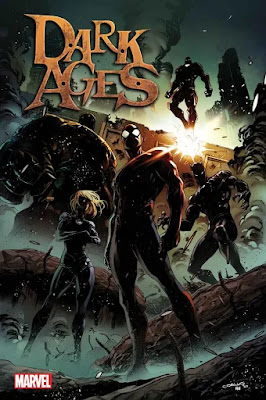 Dark Ages #1 The solicitation copy  for writer Tom Taylor and artist Iban Cohello's six-issue crossover event series implies that this time everything the heroes have just isn't enough to save the day, and that "The world outside our window...is about to end."
It reminds me a bit of DC Comics' 1996 event Final Night (recently-ish reviewed here) where the heroes spent a significant time trying to come to terms with the idea of not saving the day and managing the fall-out of their failure, and  the cover image, the word "dark" in the title and the "The lights are about to go out" slug in the solicit further suggests Final Night, in which Earth's sun was being extinguished.
If this really does turn out to be rather Final Night-ish, well, this won't be the first time a modern Marvel crossover event series has borrowed a plotline from an old DC one, but that's just mere conjecture on my part. One has to  assume that whatever threat the Marvels are facing here, it's not as simple as the sun being extinguished, as whipping up a new sun seems to be the sort of thing Mister Fantastic, Tony Stark and T'Challa could handle in an afternoon.

I guess we'll see. So far, at least, there aren't a million tie-in issues listed so, if that ends up staying the case in the months to come, then it's already a refreshingly different kind of Marvel crossover event series... 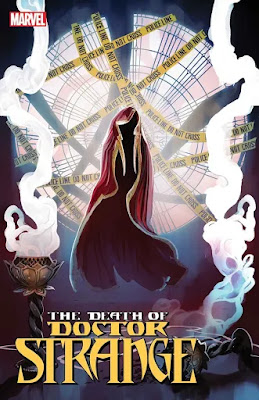 Aw, look how sad Dr. Strange's cape, the best character from 2016 film Dr. Strange, is on this cover of The Death of Doctor Strange #1 by Jed Mackay and Lee Garbett. 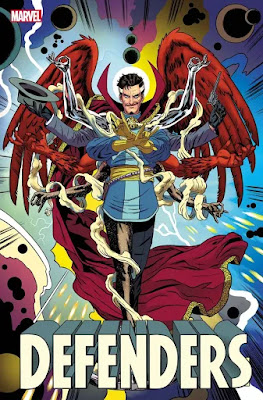 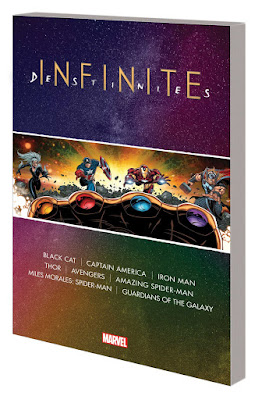 I can't look at the cover of Infinite Destinies and not think of the TV show Friends. I assume that is not the effect they were going for. 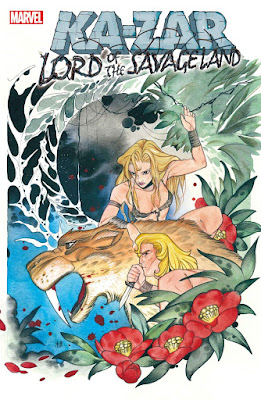 I also like this cover for Kazar: Lord of The Savage Land #1. I'm sort of interested in Marvel's Ka-Zar, the publisher's answer to Tarzan (who lives with his pet saber-toothed tiger in a land of dinosaurs), but this series by Zac Thompson and German Garcia apparently follows-up on details from the Empyre crossover, which Ka-Zar was barely in (at least, the main series proper, the only part I read; I guess he died in a tie-in, and is now being resurrected with new powers...?). 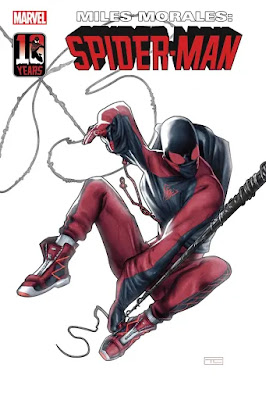 Miles Morales: Spider-Man #30  marks the 10-year anniversary of the character, if you would like to  feel old. Marvel is celebrating with a 40-page, $5 anthology special issue, plus a "facsimilie edition" reprinting of his appearance in Ultimate Fallout #4 and a bunch of variant covers guest-starring Miles. 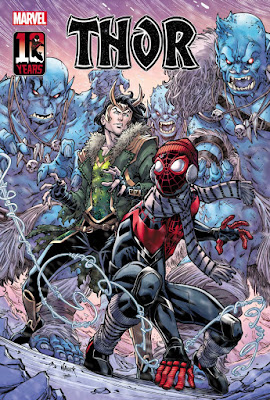 Why here's one now! This is Todd Nauck's variant cover for Thor #17; I dig Miles wearing his winter gear over his costume. 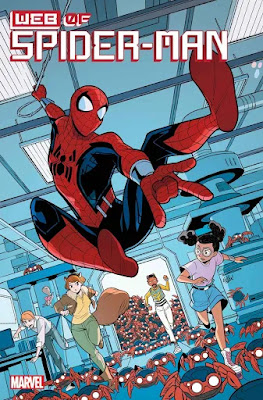 Look, it's Squirrel Girl! By Gurihiru! That's exciting!
But don't get too excited; it's just a cover image. The interiors of W.E.B. of Spider-Man #4 and #5 are by artist Alberto Alburquerque.
Posted by Caleb at 11:30 AM