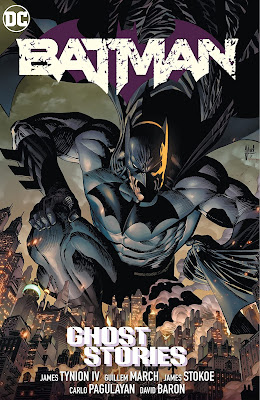 I know I already discussed Batman Vol. 3: Ghost Stories in a previous post, but I had a few other things I wanted to say about it. Specifically, eleven more things.
1.) This is a legitimately awesome image.  Pages two and three of the collection are given over to a two-page spread in which Batman and Robin swing over Gotham City, and between the panels in which writer James Tynion IV and artist Guillem March are beginning to tell their story.

It's a pretty great image, and one which would seem to date to the time shortly after Tim Drake first became Robin but before "Knightfall", given Batman's still-blue suit. This is a time period in which Norm Breyfogle would have most likely been the artist to be drawing Batman and Robin together, and March does a pretty great early-to-mid-nineties version of the Dynamic Duo. Like Breyfogle, he has an admirable balance of realism and exaggeration in his Batman design, who is lithe and athletic here. He's also notably younger and happier looking then the bigger, bulkier, gruffer and more intimidating version of the character that March draws in the scenes set in the present.
March just doesn't get as much credit for being as awesome of a Batman artist as he is, if you ask me.
2.) I could look at pictures of Batman kicking Grifter in the face all day. For reasons I don't understand and can't even imagine, Lucius Fox has hired a bodyguard, and the bodyguard he settled on is Cole Cash, AKA Grifter from Jim Lee's early '90s super-team WildCATS (and various attempts to revive them in the decades that have followed).
Batman goes to visit Fox, but that necessitates a three-page fight scene in which Grifter tries to violently stop Batman from doing so, using his fists, knives and, ultimately, a hidden gun, which is how the confrontation ends, with Grifter apparently winning the fight. (It ends with Grifter holding a gun to Batman's forehead, at which point Fox arrives and breaks it up).
It's a credit to Tynion and March's storytelling skills that they actually made Grifter vs. Batman look like a decent fight, as it should really only take Batman about a panel to dismantle Grifter, by flipping his stupid face mask up over his eyes and punching him in the mouth, or grabbing his stupid face mask and pulling him into his fist repeatedly by it like one of those old balls on a string toys, or pulling his stupid face mask all the way down over his throat and choking him with it.
Basically, that stupid face mask looks like a real liability in a fight. And is stupid.
You know, I don't think I care for that Grifter character, which is why images of Batman kicking him in the face might prove so satisfying.
There's also a pretty great panel in which Batman punches Grifter so hard in the stomach that he lifts him bodily off the ground a few feet.
The scene did make me want to revisit Grant Morrison and Val Semeiks' 1997 JLA/WildCATS crossover though, which I remember liking quite a bit at the time, despite not knowing/caring anything at all about the WildCATS.
3.) No one gives dirtier dirty looks than Batman. Check out the expression March draws on Batman as he gives a parting warning/threat to Grifter. He manages to frown and snarl at the same time, shooting daggers from his eyes that could gut someone like a fish.
4.) I'm not so sure about this Ghost-Maker character. The two most important elements of a superhero character, because they are the two most immediate elements, are their name and their costume. I don't really like either in the case of Ghost-Maker.

I've been operating under the assumption that the name "Ghost-Maker" refers to the fact that the character kills his foes, thus making ghosts. It's a dumb name, but it's dumb in a funny way, and I think it's a fine name for a character like, say, The Punisher, where there should be some remove between the reader and the goals and motivations of the character.

It seems somewhat frustrating though because so much of the character's background seems to suggest that the character's name should be The Ghost or Ghost, and I'm not entirely sure why it isn't, aside from the fact that maybe the old Dark Horse superhero (who teamed-up with Batgirl once!) has that name.
See, Ghost-Maker has so hidden his identity and presence in the world that it's almost as if he doesn't exist...like a ghost! His special technology, with which he can even hide from Oracle, is called "Ghost-Net." So "Ghost" or "The Ghost" really seem like the way to go, no?
If that's too generic, then one might consider an adjective, like The Gay Ghost or The Grim Ghost, no? Or even a color. The White Ghost is sort of a redundant name, and I understand why they went with white as the costume color, as it so sharply, visually contrasts with Batman's costume, but perhaps The Silver Ghost or The Red Ghost or The Crimson Ghost would have worked, while also allowing for a strong visual contrast (The Gray Ghost, obviously, was taken).
Then there's the costume. I don't necessarily hate it, but I'm not terribly fond of it, particularly the baggy pants and the mask, which, as I mentioned before, keeps making me think of a cartoon duck under it. I think the face is just a little busy. Something opaque and feature-less, like the original Red Hood costume (or the one that Jason Todd sported during Batman and Robin) or something reflective like Cobra Commander sometimes wore would have worked better; as is, the two little lights, the various black and white panels and the varying degrees of opacity and reflectiveness just look like too much to me.
Although, I suppose, the busy-ness, like the color scheme, may be part of the point; his costume is as complicated and busy as Batman's is simple and iconic...?
I liked Ghost-Maker's costume even less as I read on, as he appears in various flashbacks where earlier iterations of his costume that I actually liked quite a bit more.
6.) See? The above costume is one that Ghost-Maker is wearing when he approaches young Bruce Wayne during the time the two were crisscrossing the world, seeking various masters to train under as they sought to become perfect crimefighters. During their first meeting, Ghost-Maker was wearing street clothes with the mask pictured above. This time he seems to have settled on an early version of an entire costume.
This one's not perfect, but I greatly prefer how much more simple and paired down it is. I also like the Netflix's Daredevil-esque mask more than the complicated face plate he wears in the present.
He'll appear in a later flashback wearing a slightly altered version of that costume, havin now added a hood, which adds to his ghostliness, and a pair of gloves. Of all the Ghost-Maker costumes in the book, I think I like this one the best.
7.) Harley Quinn agrees with me. Ghost-Maker is a dumb name.
8.) Is this the first time Guillem March has drawn Batgirl Cassandra Cain? Just curious. I think it might be, unless Cassandra appeared in Gotham City Sirens at some point. I would certainly be interested in seeing more of his version of Cassandra, given the strength of his take on Batman. Cassandra reappears later in the book, alongside her fellow Batgirl, Stephanie Brown, but she's drawn by Bengal and Pagulayan and Miki in those panels.
9.) Wait, he killed how many people? Here is where Tynion loses me with the Clownhunter character, who is otherwise one of those creations who perfectly balances awesome with stupid to equal out as a good super-comic character. According to Ghost-Maker here, Bao has killed 24 people. 24! A full two-dozen!
That presents a pair of problems for the character.

First, it seems like a way too high number. I mean, we see Bao kill his very first clown in the pages of this very collection, as his origin story is recounted in the quite-excellent Batman Annual #5 (written by Tynion and drawn by James Stokoe). He hits a Joker henchmen with his bat-bat (a batarang-embedded in or tied to a baseball bat), and then sets him aflame using the Molotov cocktail the clown was preparing to throw at Bao's building.
Fine. But the other 23? That's... a lot of people for an ordinary 17-year-old with no special skills and no training or any equipment to take out in a matter of days; like, The Punisher kills criminals right and left, but he's a highly-trained and experienced jungle fighter with an arsenal so big it once had its own comic book series. Bao's sole experience at committing acts of violence against others seems to be playing fighting video games. That, and he's pretty motivated. And that's it.

I know "realism" isn't something one should go into super-comics expecting a lot of, but, with Batman comics especially, I need them to at least not be so far-fetched that I can't convince myself to suspend my disbelief.
Secondly, that is such a high body count that it seems preposterous that Batman wouldn't bust Bao. Had he killed one, maybe a couple of Joker's followers in self-defense, that would be one thing (Although the very name "Clownhunter" implies that he's actively stalking clowns to murder). But Bao has committed 24 acts of premeditated murder.

In this comic, in the very panels following the one posted above, Batman tells Ghost-Maker that throwing the kid in prison wouldn't help, as he would only continue to kill Joker's henchmen from the inside (and likely with the help of Blackgate prison guards), and that, besides, the kid's only 17, and was traumatized by seeing The Joker kill his parents in front of him.

None of those lines of argumentation sound much like Batman. I mean, remember when he used to give Huntress shit for being too rough with the criminals she pursued? Or how he took down Jean-Paul Valley because he was so brutal and reckless that he might, theoretically, someday kill someone? It's hard to square that Batman, the one for whom life is so sacred he refuses to ever kill unrepentant mass-murderers and monsters like The Joker or Killer Croc or whoever, with one who is willing to let Clownhunter go free after he's killed more than two-dozen people.
10.) Wildcat! I so missed the Golden Age during DC's decade or so of The New 52—when they were trying to operate under the understanding that there was no Golden Age, and superheroes "started" about five years ago when the Justice League formed—that just seeing any acknowledgement of any Golden Age heroes thrills me now. Like, I genuinely got excited to see a brief montage featuring young Bruce Wayne and various mentors, with Wildcat Ted Grant among them (as well as Zatara, in the previous panel).

Of possible note here is that Wildcat appear to be a white guy, as per usual, but in the Stargirl Spring Break Special #1, the Wildcat that appeared among the various JSA line-ups on the final splash page appeared to be a Black guy.
11.) Does Ra's al Ghul know about this? At the climax of "Ghost Stories" Batman sword-fights Ghost-Maker...while shirtless. Is...he allowed to do that? I thought he only got in shirtless sword fights with Ra's al Ghul.
Posted by Caleb at 4:41 PM