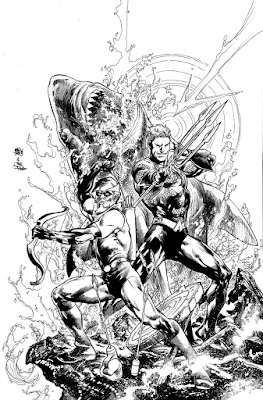 I don't know if I would necessarily use the word "excited", but I'm definitely interested in Brandon Thomas and Ronan Cliquet's Aquaman/Green Arrow: Deep Target #1. That's because the pairing of the two characters is so unusual. Green Arrow is regularly teamed-up with other heroes from the Justice League, like Black Canary, Green Lantern Hal Jordan and even Batman, but, for whatever reason, never Aquaman (Well, I say "whatever reason," but I imagine the real reason is that bow and arrows don't work underwater). The two have been Justice League colleagues for an awfully long time, with GA being the first non-founder to join the team, and he and Aquaman stayed on the team through the end of the Satellite Era.
Speaking of which, from the look of the black-and-white cover released with solicits, this will be set sometime in the past, as neither character looks quite like that at the moment. 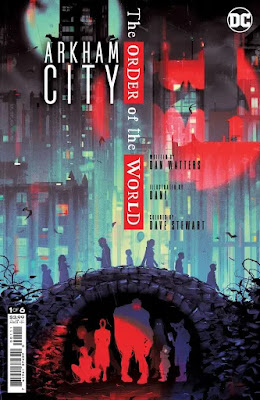 I'm honestly not 100% sure if Dan Watters, DANI and Dave Stewart's Arkham City: The Order of the World #1 is meant to be in continuity or not. The solicitation copy seems to suggest that it is (as does the fact that it seems to be using mostly minor Arkhamites, the bigger names apparently all being escaped when the destruction of the asylum occurred), but since it shares its title with one of the games from the Arkham trilogy of video games, I'm second-guessing it a bit. 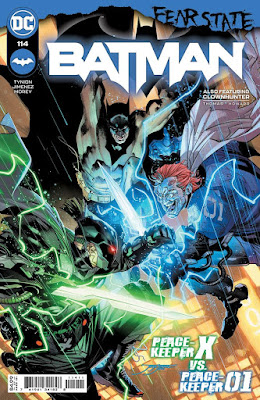 The back-up story in Batman #114 is a Clownhunter one, drawn by Jason Howard. If that's the Jason Howard I think it is, then that character has seemed to be lucky enough to attract some particularly high-quality artists in his relatively short career. 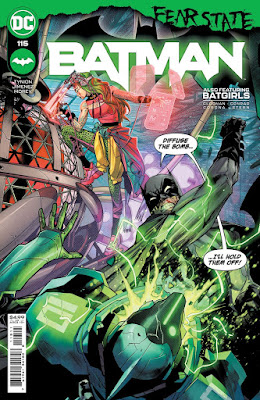 I believe it's pronounced "defuse", Batman.
Batman #115 has a Batgirls back-up, featuring the team of Cassandra Cain and Stephanie Brown, under Oracle's guidance. Is it weird that I'm more interested in the back-ups than I am in the lead stories of Batman at the moment...?
It makes me curious how they will end up collecting the back-ups though. Will they appear as back-ups in the Batman trades, or will a bunch of them be collecting into an anthology of sorts, assuming that none of the back-ups are long enough to fill a trade collection all on their own....? 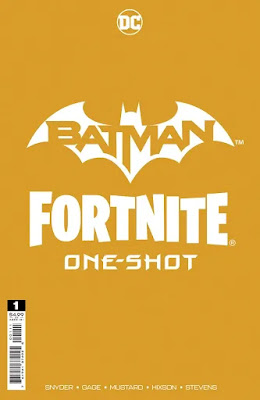 Wait, Batman/Fortnite One-Shot #1...? Given that this is apparently a license to print money, I'm kinda surprised it's not an ongoing series. 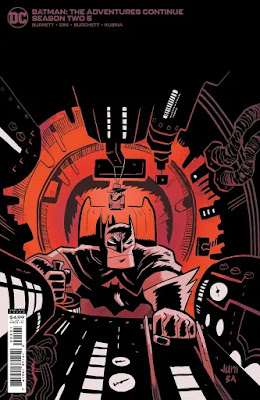 Here's the rather idiosyncratic cover for Batman: The Adventures Continue Season Two #5. It looks like the creative team will see a change, with Rick Burchett handling art rather than Ty Templeton. That's...not exactly bad news. If you can't have Ty Templeton drawing your Batman: The Animated Series-style book, then you're gonna want Rick Burchett drawing it. Those two are, like, tied among living artists I would wanna see on such a book.
...
Although I guess Tony Millionaire might be fun... 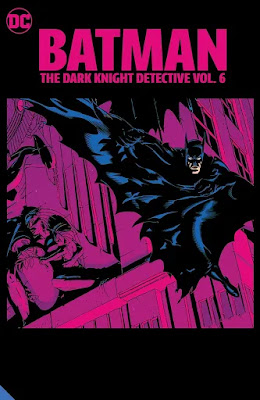 Hooray, DC is publishing Batman The Dark Knight Detective Vol. 6! I was literally just talking about this! The volume will collect Detective Comics #622-633. So that means it will include this bonkers-looking three-part story arc from John Ostrander and Flint Henry that I recall freaking me out as a teenager when I flipped through it, but was too afraid to actually purchase: 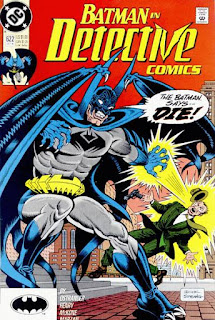 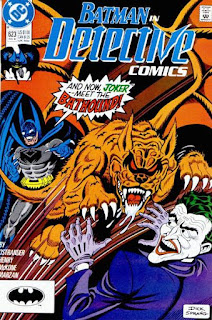 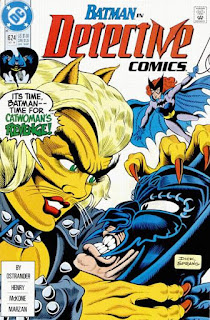 And yes, those are signed Dick Sprang! They look like Sprang doing his version of a Kelley Jones or Jim Balent Elseworlds Batman design.
Also included will therefore be Detective Comics #627... 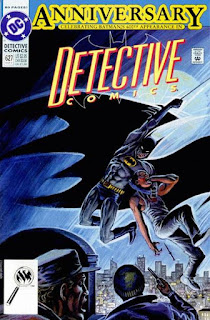 ...which celebrated Batman's 600th appearance in Detective Comics by having various Batman creative teams offer their "cover" version of the first Batman adventure, "The Case of The Criminal Syndicate" (included among those creative teams is, of course, the Grant/Breyfogle/Mitchell team, which concluded their Detective run with the comics in the previous collection).
Additionally, there's trio of Marv Wolfman/ Jim Aparo, four Peter Milligan/Aparo comics, and, finally, a Milligan and Tom Mandrake comic. I've only read three of these issues, total, I think (#627, the Milligan/Mandrake issue and a Milligan/Aparo issue which introduced a new Human Bomb of sorts), so I'm really looking forward to this one. 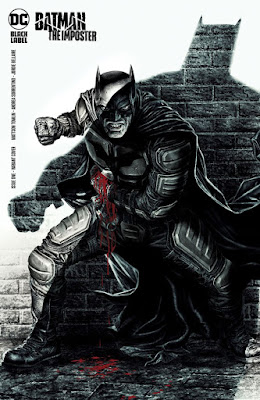 There's a second, murderous Batman on the rooftops of Gotham City in the early days of Batman's career in the pages of Mattson Tomlin and Andrea Sorrentino's Batman: The Imposter #1. Based on all the pads that cover artist Lee Bermejo drew on his costume, I'm going to guess that this second Batman is the goalie for a local hockey team when he's not out murdering criminals. 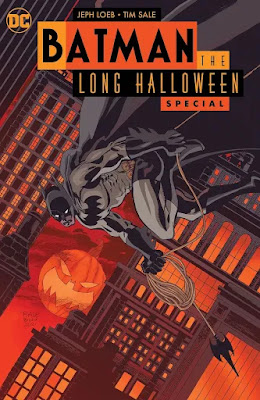 I assume that DC getting Jeph Loeb and Tim Sale to re-team for a Batman: The Long Halloween Special has something to do with the fact that they are releasing some direct-to-DVD movies based on the comic book series. That's fine. Whatever gets me more Tim Sale from the Legends of the Dark Knight Halloween specials/Long Halloween/Dark Victory milieu is fine by me. I think I might have preferred a standalone one-shot akin to the first three Halloween specials the team did before The Long Halloween proper, but I'll take what I can get.

I hope this sells well enough that DC commissions the pair for more projects. I would love to see Sale's take on more modern Batman villains and allies, for example, as he's done so much work in the "Year One" era so far... 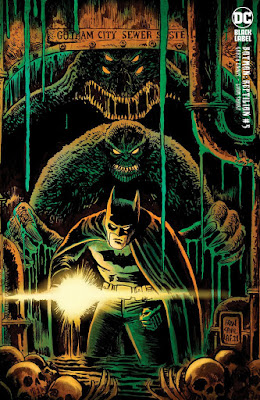 Here's a really great cover for Batman: Reptilian #5 by Francesco Francavilla. I can't wait to read that one in trade. 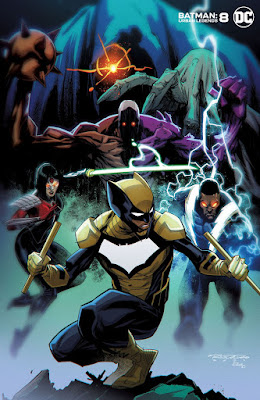 Oh shit, Mumm-Ra is coming for Duke Thomas in the pages of Batman: Urban Legends #8! 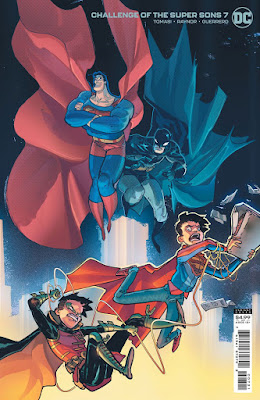 Look at Riley Rossmo's cover for Challenge of the Super Sons #7. I love that he gives Superman and Batman both honest-to-God shorts over their tights; that's how I draw 'em too, in the very rare instance in which I draw either Superman or Batman!

And look at those two rascals Robin and Superboy. I can't believe anyone would see those two and think, "Say, we need to break these guys up by hyper-aging one of them into young adulthood, ASAP."
And yet... 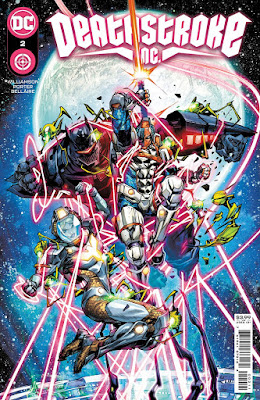 I honestly love how stupid Black Canary's space-suit looks on this cover for Deathstroke Inc #2. 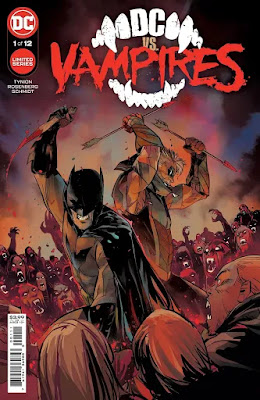 DC Vs. Vampires #1 kicks off an out-of-continuity miniseries by James Tynion IV, Matthew Rosenberg and Otto Schmidt pitting the Justice League vs. well, it's in the title, isn't it? It's such an extremely obvious pitch for a comic—it's literally what I think about every single time I watch a vampire movie—that much will depend on the execution.
Hopefully the focus will be on characters other than Batman, given how often he's fought vampires/been a vampire over the years (Tynion's readily apparent fandom for 1990s Batman suggests he likely read and internalized the Doug Moench/Kelley Jones/John Beatty/Malcolm Jones III Red Rain trilogy, now conveniently available in a single volume).
It should also be fun to compare and contrast this with Jason Aaron's third Avengers arc, which pitted Marvel's premiere super-team against Dracula and a super-team of vampires.
I like the logo. 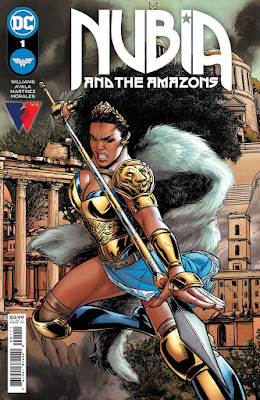 Well I'm glad to see Nubia and The Amazons #1 in this round of solicits; I thought it odd that the Future State Wonder Woman was getting her own title (Wonder Girl) and Hippolyta was re-joining the Justice League, but maybe the most interesting change in the extended Wonder Woman cast, Nubia being promoted to Queen of the Amazons, didn't earn a book.
I think I'd prefer Nubia be in the almost-all-white Justice League, too, as that would definitely be infinitely more interesting than Hippolyta subbing in for her daughter for a second time, but whatever. The six-issue series will be by writers Vita Ayala and Stephanie Williams, with art by Alitha Martinez and Mark Morales. 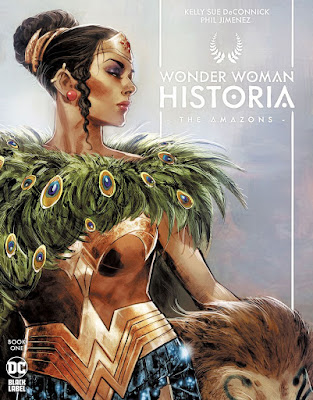 Wonder Woman Historia: The Amazons #1 is apparently the complete history of the character and her people, told in a three-issues series written by Kelly Sue DeConnick. The first issue will feature art by Phil Jimenez, to which I can only say, "Yes, please."
Posted by Caleb at 12:48 PM