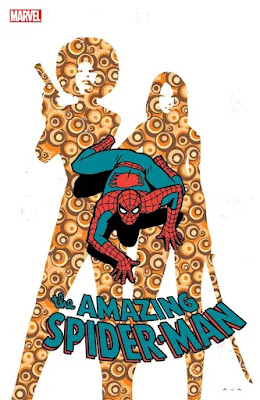 So, stupid question. Amazing Spider-Man #77 will be written by Kelly Thompson and drawn by Sara Pichelli, the former being part of "the Beyond Board" that is credited on each of the three issues of ASM being released in October  (Sounds like they are returning to the writer's room type set-up they had with the post-"Brand New Day" ASM).
Anyway, is Thompson the first woman to write ASM? Is Pichelli the first woman to draw it?
I apologize if this is an idiotic question, but I haven't paid as close attention to Marvel comics as I have DC over the years, and it was kind of a big deal when Mariko Tamaki started writing Detective Comics recently,  or when Becky Cloonan drew an issue of Batman a few years back, so I'm just wondering if these are long, long, long overdue milestones on the flagship Spider-Man book or not. 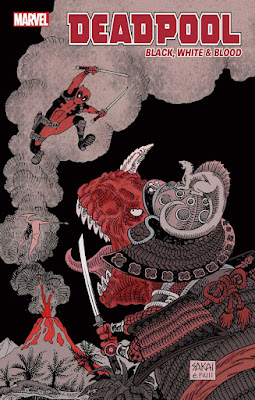 Okay, yes, Stan Sakai drawing the cover for Deadpool: Black, White & Blood #3, and that cover featuring a Tyrannosaurus Rex in samurai armor wielding a sword in his tiny arms, is pretty damn exciting. You might even say it is the most exciting news in comics right now. Perhaps, like me, you are shocked this isn't the top story on what passes for all the comics news sites these days.

But you know what's even more exciting? Sakai is also providing one of the issue's three stories, "the age-old parable 'How The Deadpool Got His Swords!'" 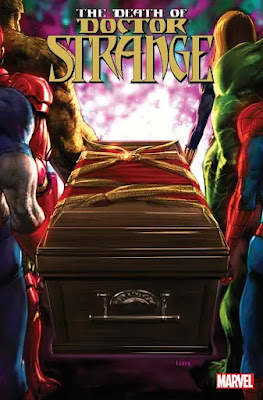 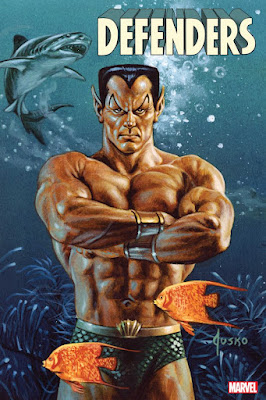 Yeah, I'm totally gonna have to trade-wait this new Defenders mini-series, so I can make sure I get the Joe Jusko variant cover showing a fish kissing Namor's abs, while a shark wheels in the background and says to itself, "Oh, shit! It's The Sub-Mariner!"
I don't think the Avenging Son is actually in Al Ewing and Javier Rodriguez's Defenders line-up, which is actually kind of too bad, as all I really want from a Defenders comic is Namor and The Hulk fighting. 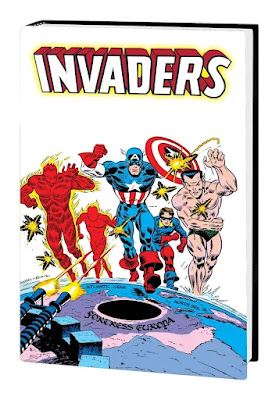 I'd buy the hell out of a collection of old Roy Thomas and company Invaders comics that didn't cost $125, but, alas that's what Marvel's Invaders Omnibus is going for.  If only they still published those black-and-white, phone book-sized Marvel Essentials volumes... 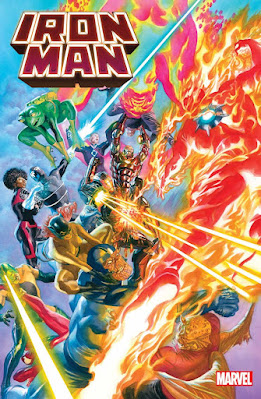 I'm not going to lie. I kind of love seeing Alex Ross' skills used to render Frog-Man so realistically on the cover for Iron Man #13, which seems to be full of some fairly deep cuts from the Marvel character catalog. At least, I can only identify about half of those guys... 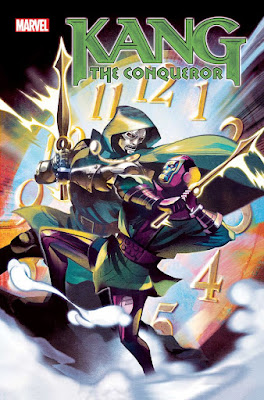 I like Mike del Mundo's cover for Kang The Conqueror #3; nice concept, well-executed. 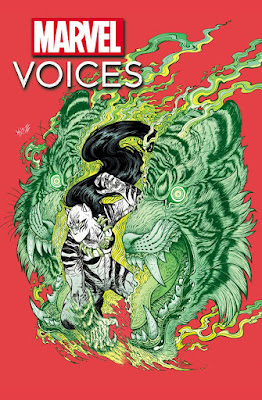 Check out this rad cover for Marvel Voices: Community (Comunidades) #1, an anthology featuring Latinx characters and creators, by Maria Wolf. 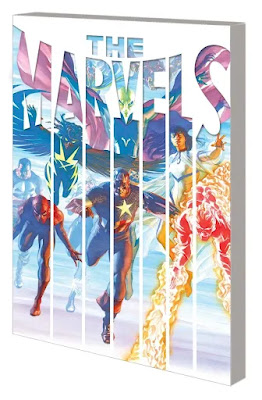 I've been trade-waiting Kurt Busiek and Yildiray Cinar's intriguing-looking The Marvels, and it looks like that waiting will finally be over in October, when Marvel releases The Marvels Vol. 1: The War in Siancong. Have any of you guys been reading the series? Is it any good? Is it, like, buy-the-trade good, or just borrow-the-trade-from-the-library good...? 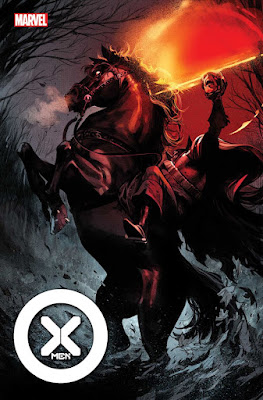 X-Men #4 was the only one of the, let's see11 X-Men books to catch my eye this month, because one of the three covers for the issue seemed to feature the Headless Horseman, a fact confirmed by the solicitation copy. Whether or not Cyclops is actually decapitated during the proceedings, this seems more exciting to me then whatever the Krakoa shenanigans are.
Posted by Caleb at 9:30 AM

I'm not sure about whether this is the first women writer on an issue of SPIDER-MAN, but Colleen Doran did do an issue during the 'Acts of Vengeance' cafuffle which pitted Spidey against Graviton....

We are Latinos or Latins, actually. The X is a North American cultural imposition.

Ann Nocenti definitely wrote an issue (the Mad Dog Ward crossover) although I don’t think she had an actual run. Louise Simonson wrote some Web Of Spider-Man but I can’t remember if she ever made her way to ASM.