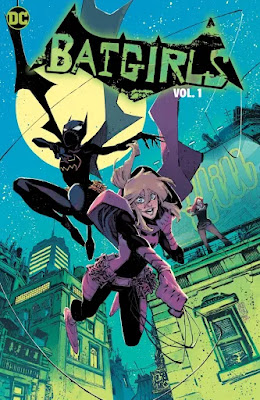 Okay, important question. I've been excited to read Batgirls since the series was first announced, and now it looks like it will finally be available in trade this September. So how good is it? Is it something I will want to read and re-read, and thus want to own, as I do all of the Cassandra Cain issues of Batgirl?  Or is it just okay, a comic I'll want to read but not necessarily ever want to revisit, like the Stephanie Brown issues of Batgirl? Any advice from fans is appreciated. 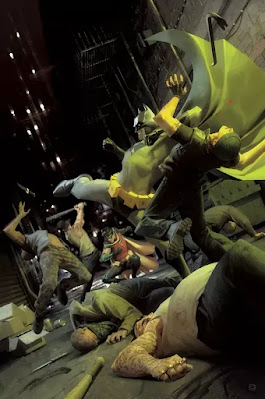 This variant cover for Batman #127 has a very Norm Breyfogle-y energy, I think. It's not ust that the Robin is Tim Drake in his '90s costume, but the way in which the very dynamic Batman is shown fighting a whole group at once, landing multiple blows on multiple foes in different directions. It reminds me of all the times Breyfogle drew Batman fighting groups of enemies, generally dispatching several of them in a single panel. I'm not sure who the artist is, as there are a bunch of different variant covers to the issue, but, if I had to guess by the provided solicitation info, I'd guess Alex Garner. It's part of Chip Zdarsky and Jorge Jimenez's run on the series. 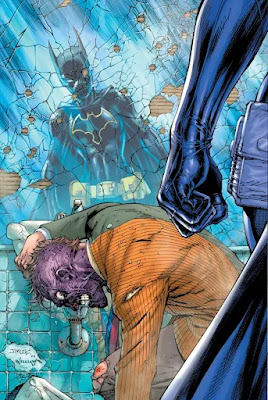 I'm somewhat surprised to see Batgirl Cassandra Cain on Jim Lee's variant cover for Batman—One Bad Day: Two-Face #1, this month's installment of the Killing Joke-inspired series of one-shots spotlighting various Batman villains. There are, of course, a bunch of variants, but this one seems less...timeless than the more portrait-style variants, and makes me wonder if Cass actually appears in the Mariko Tamaki and Javier Fernandez comic. I guess we'll see. 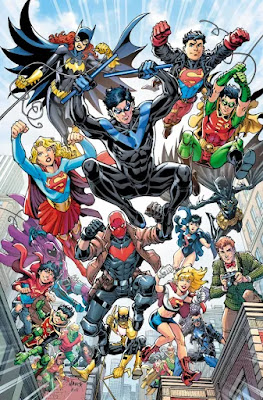 I like Todd Nauck's variant cover for Batman/Superman: World's Finest #7, featuring every Batman and Superman sidekick of sorts ever, a whole lot, but I admit to puzzling over who's in it (note the two blonde Supergirls; are they two different people, and are they both in-continuity now?) and why particular looks were chosen over others (the Super Sons are wearing their previous costumes, for example, rather than their current ones). It's a pretty great image though, and one that rewards poring over and engaging with).
How has this series been so far, anyway? I imagine the collection is coming out fairly soon-ish, and I'm wondering if I need to buy it (that is, it's really good) or just borrow it from the library (that is, it's simply pretty good). Let me know if you've been reading it. 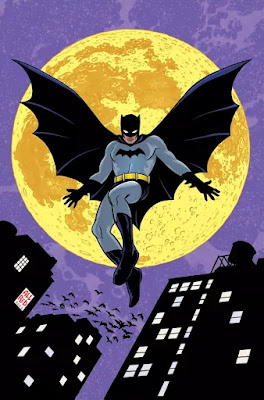 After seeing him draw the '66 version of Batman so often, it's nice to see Mike Allred drawing another version of the character on this variant cover for Batman: The Audio Adventures #1. Allred was one of those few artists who was just born to draw superheroes. Batman vs. Robin  #1? Didn't we already do this one once before? At least, that's the sub-title of Grant Morrison's second Batman & Robin collection, and there was a  2015 direct-to-DVD animated film called Batman Vs. Robin. This does have Mark Waid attached as a writer though, so it might be better than it's derivative nature suggests. Also, I like this scary bat gargoyle on one of the variants: 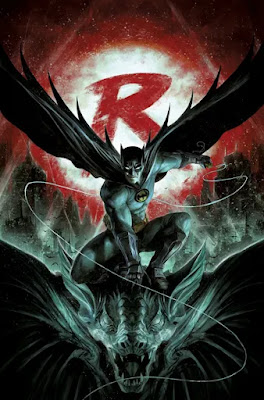 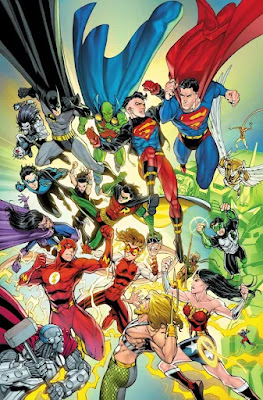 Hey look, it's Young Justice vs. the '90s Justice League, complete with Steel, Plastic Man and Zauriel! Even short-lived members Green Arrow Connor Hawke and Hippolyta are there! I hope this variant cover is something that literally happens in the pages of Meghan Fitzmartin and Laura Braga's Dark Crisis: Young Justice #4. 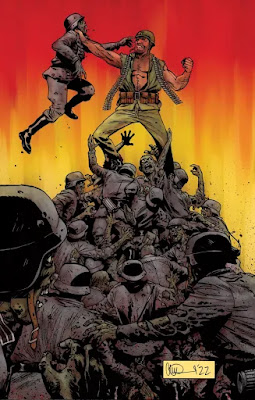 Well this is interesting. DC Horror Presents: Sgt Rock Vs. The Army of the Dead #1 is written by none other than Bruce Campbell, who has some experience with armies of the dead, playing opposite of them in some of his film work. I have no idea what how good of a writer Campbell is, but the anyone vs. zombies premise writes itself to a certain degree, and DC is pairing Campbell with the great Eduardo Risso, so the deck is already somewhat stacked in Campbell's favor. 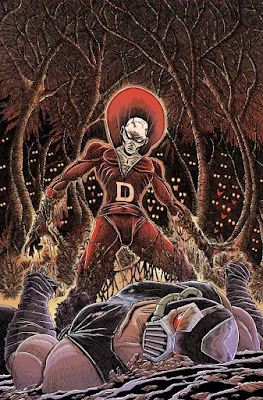 It is now time for my monthly statement that I wish James Stokoe was drawing interiors on one of these superheroes vs. vampires books, rather than just variant covers. Here's his cover for DC Vs. Vampires: All-Out War #3. 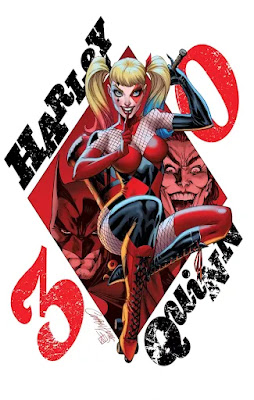 J. Scott Campbell provides one of the covers for the Harley Quinn 30th Anniversary Special #1. Appearing in a seated position rather than one of his two or three standard woman-just-standing-there-in-a-void covers, and with two male faces floating in the background, this is actually one of the more complex and creative covers I've seen from the artists since I can't remember when. Maybe when Mary Jane was sitting on the couch with a mug....? 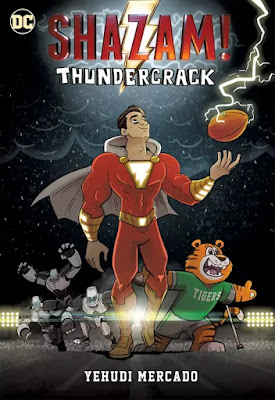 I'm always happy to see new Captain Marvel content, especially targeted at younger and/or new readers, even if it's set in the questionable timeline of the movie, as Yehudi Mercado's original graphic novel Shazam: Thundercrack, is. This month will also see the release of New Champion of Shazam! #2, the second issue of Josie Campbell and Evan "Doc" Shaner's series starring Mary Marvel....or Mary Shazam....or whatever her name is supposed to be now. 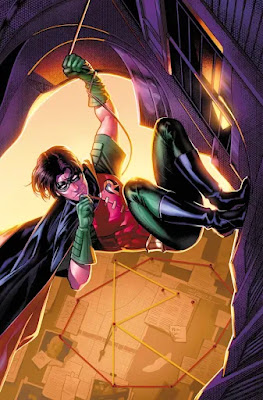 Finally, I was more than a little surprised to see a solicitation for Tim Drake: Robin #1, a new, ongoing series featuring the third and best Robin. (Robin, the ongoing series starring the fourth and current Robin Damian Wayne, is MIA from the solicits). The series will be by writer Meghan Fitzmartin, the writer who handled Tim's recent coming out as bi and has precious few writing credits, and artist Riley Rossmo, whose style I have a hard time imagining applied to the character's adventures, but I guess it will depend on how they're written.
Though the book seems a little out-of-nowhere—at least as much as any Batman-adjacent comic ever does, given that "Batman-adjacent" usually means "likely to sell in today's market"—I'm glad to see they're actually doing something with Tim's coming out, telling what appears to be an actual story with some place in the DC universe, rather than just the headline-grabbing short story in the Batman anthology that got mainstream media to notice Tim Drake again. (Now if only DC would do a JSA series, so they can follow through with Alan Scott's coming out...as well as using that huge swathe of their character catalog. Seems like a particularly apt time, given that the JSA will be appearing in the Black Adam movie, as odd as that seems.)
Anyway, as I've noted recently-ish, there's a lot of narrative momentum to the Tim Drake character, and, as a fan of his, I'm glad to see him getting his own title again. (Hopefully DC will resume collecting the original series Robin series starring Tim again; they left off after only five volumes).
Posted by Caleb at 11:53 AM

One of those Supergirls is the current, modern Kara Zor-El, and the other is an iteration of the Linda Danvers Supergirl written by Peter David. Given how much is back in continuity now, I guess they both *could* have existed, though no story has suggested Linda is active again. The presence of Cir-El (definitely not active) and the old Super Sons costumes makes me think the image is more a mash-up of sidekicks past than an indication of the current state of things.

Not super helpful but I think Batgirls is better than Stephanie Brown's Batgirl series but not as good as the Cassandra Cain Batgirl series. I'd say library.

THe World's Finest is pretty good. Feels as fun as the Mark Waid written Brave and the Bold series.

Both have great art.

I agree with comparing World's Finest to the Waid-written Brave & The Bold. It also takes place in a sort of nebulous early'80s continuity (Dick Grayson Robin, older Kara Zor-El Supergirl, classic JLA). It is just about my dream DC comic.

Batgirls is very fun. It reminds me of a more anarchic Gotham Academy.

Considering I dropped it after 6 issues, I would say borrow Batgirls from the library, at best. It didn't come close to interesting me as much as either the Cass Cain or Stephanie Brown Batgirl books. There were some interesting character bits here and there, but I didn't care about the larger plot at all, found the pacing odd, and the caption box narration irritating.

I am very interested in Bruce Campbell writing Sgt. Rock vs. Zombies, however.