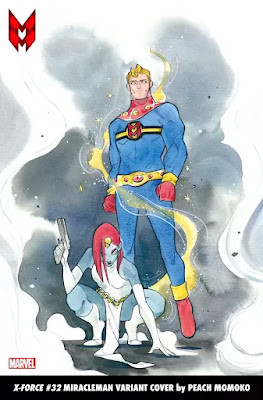 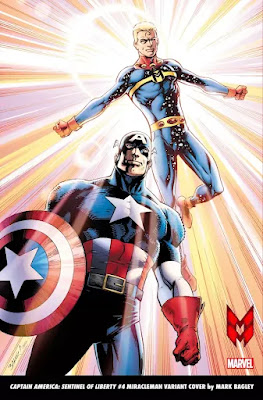 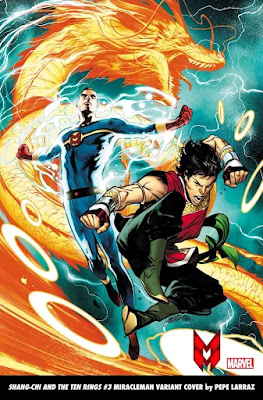 Among Marvel's various variant schemes for the month of September are "Miracleman variants"—did you forget that Marvel has the rights to Miracleman now? Because they do—in which the character poses awkwardly next to the star of a particular book. How awkwardly? Well, most of the examples, like these from X-Force, Captain America: Sentinel of Liberty and Shang-Chi and the Ten Rings, all look more like Miracleman is photo-bombing a regular cover rather than, like, teaming up wit the character pictured. 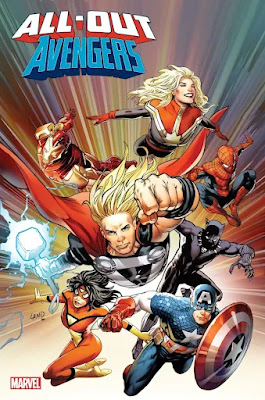 My first thought after seeing the line-up in All-Out Avengers #1, including non-Avengers but popular-ish characters Spider-Man and Spider-Woman, was that perhaps it was a new all-ages or at least new reader-friendly Avengers book, something akin to the Marvel Action books that IDW was publishing for a while. But I see now that it's rated "T+", so I'm not sure what purpose it really serves other than providing more Avengers content than Jason Aaron's Avengers books do by themselves. It looks like it's going to be drawn inside as well as out by Greg Land, though, so it's an easy book to skip, even, I imagine, for Avengers fans.

I feel kind of bad for writer Derek Landy, as he's teamed with a creator whose work screams "do not read" on a book that looks like it could potentially be pretty fun. 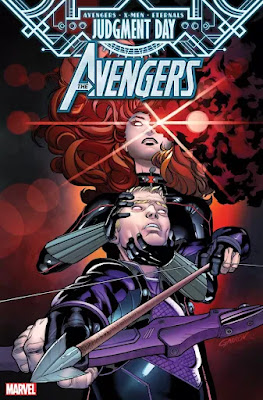 Speaking of Aaron's Avengers and Greg Land, it looks like Avengers #60 won't be by Aaron or part of his ongoing storyline, but and A.X.E. tie-in by Mark Russell and Land, which is weird, given that there's also an A.X.E.: Avengers series launching this month. I hope this doesn't end up collected in an Avengers collection; that's one of the few Marvel titles I'm still reading. Meanwhile, for an Aaron's Avengers fix, this month will see the release of Avengers Forever #9. A.X.E.: Judgement Day, meanwhile, will publish its fifth issue. 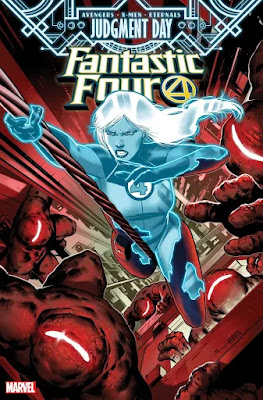 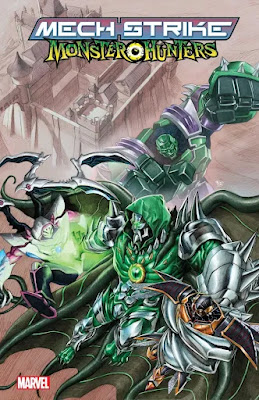 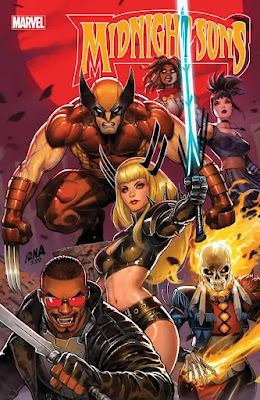 Midnight Suns #1 debuts, and it looks like a random-ish group of supernatural adjacent characters, plus Wolverine. I'm not a big fan of separating The Runaways from one another, especially when....wait, it's Midnight Suns-with-a-U, not Sons-with-an-O....? I thought it was the latter, and a quick search of comics.org seems to confirm that. Is the new spelling just because there are ladies present...? 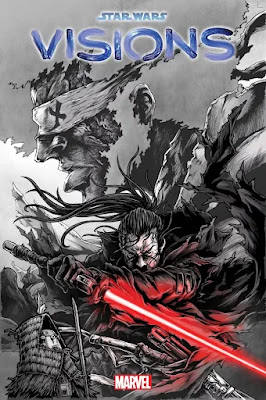 Finally, this is interesting. Star Wars: Visions #1 by Takashi Okazaki continues the Star Wars/samurai mash-up from one of the visually most striking animated shorts that was part of the Visions package on Disney+. Star Wars comics mostly just look like generic Marvel comics these days, so it's cool to see them doing something in such a sharp departure of their house style.
*Which I saw having written for both and now being embarrassed by it. What can I say, the sites weren't as bad back when I wrote for them...?
Posted by Caleb at 1:11 PM