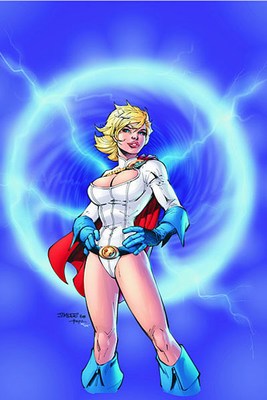 This week’s 52 origin story is that of Power Girl, a hero who ranks right up there with Donna Troy, Hawkman and the poor Legionnaires when it comes to getting screwed over by cosmic crossovers. Pre-Crisis, she was Earth-2 Superman’s cousin from Krypton. Post-Crisis, she was originally of Atlantean descent and related to Arion the Immortal. And then her origin became ambiguous. Post-Infinite Crisis, her original origin was reasserted.

To that end, this origin story is particularly useful, since it’s one of the few—or, wait a minute, is it the only?—origin that clears up what exactly Infnite Crisis changed in terms of DC continuity.

Waid tries to clear everything up in just five panels, and it’s a mess. Rather than starting with her place on the shared, composite Earth that emerged from Crisis on Infinite Earth, Waid starts on Pre-Crisis Earth-2 Krypton (Krypton-2?), so when we get to “In time, however Kara learned…that she had been born and raised in a parallel universe later eradicated in a multiversal crisis,” it’s backwards. The first three panels are the “truth,” which she came to realize after living a lifetime on post-Crisis, shared Earth.

Gah! Could this shit be any more complicated?!

DC’s resident cheesecake cover artist Adam Hughes handles the art chores, and it’s all nicely rendered and laid out, though I don’t think we needed an upskirt shot of Supergirl’s bare ass, or P.G.’s cleavage in the headshot at the bottom, but let’s turn our attention to the “Essential Storylines” recommendations. DC does a pretty good job this week, naming the two absolutely essential Power Girl stories.

INFINITE CRISIS: Power Girl was definitely a major player in DC’s latest universe defining event. In fact, outside the various Supermen and ‘boys, Batman, Alex Luthor and Wonder Woman, Power Girl had a bigger role than just about anyone in the series, even if she did spend a significant amount of it chained to a tower while various villains argued over who got to keep her to play with after they’d reshaped the universe the way they saw fit. I’m assuming that with this suggestion DC means the Infinite Crisis trade, and not the seven-part miniseries, since the trade changes a lot of little details in the dialogue that could significantly effect Power Girl (all having to do with the existence of Earth-2). For the moment, though, P.G. would seem to be the last survivor of Earth-2, although all signs point to Earth-2 returning soon. 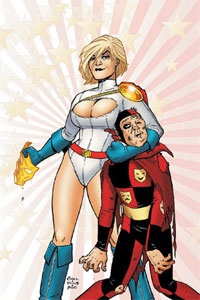 This trade collects Geoff Johns and Amanda Conner’s four-part story arc from JSA: Classified that finally told the true origin of Power Girl, although in a rather teasing way. Possible origins, some of them much more clever than the real one, actually, are repeatedly suggested before the true one is revealed. It’s by far Johns’ most light-hearted and easygoing read since Stars and S.T.R.I.P.E. was cancelled, and Conner’s art is by far the best to ever grace a Power Girl story. The trade also includes Showcase #97-99 and Secret Origins #11 from way back in the day.


And here’s what they missed… 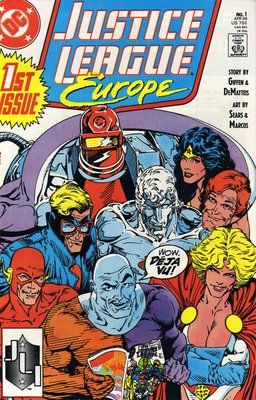 When Keith Giffen, J. M. DeMatteis, Kevin Maguire and company’s reimagined Justice League appearing in Justice League Internationa proved a hit, DC did the obvious, and created a spin-off. Unlike most spin-off series, however, Justice League Europe proved just as good as the original, since the same writers were involved. Along with penicller Bart Sears, Giffen and DeMatteis created a second League to have stationed in the Old World, one including Power Girl.


Along with Metamorpho, the Flash, the Elongated Man, Sue Dibny, Captain Atom, Rocket Red, Animal Man and others, she protected Europe from the likes of Starro, the Global Guardians and the Injustice Gang for years, often proving to be just as big a menace themselves. None of these issues have been collected into trade, but all are worth tracking down. Power Girl started out rocking a variation of her original costume, minus the peekabook cut-out, and with an Atlantean medallion for a belt buckle. She' eventually switch to a generic-looking white and yellow full body suit. Giffen and DeMatteis had a few running gags involving P.G., including her adoption of a repulsive cat, the fact that diet soda seemed to affect her moods and/or sanity, and her hatred of the Flash who, at this early point in his career, still had a lot of growing up to do.

Following the 1992 relaunch of the Justice League franchise, Power Girl joined the JLE alongside Aquaman, Flash, Elongated Man, Dr. Light and Crimson Fox (plus the ever-present Sue Dibny; Batman was the team’s leader for the first arc (in which they battled art-themed villain Deconstructo). 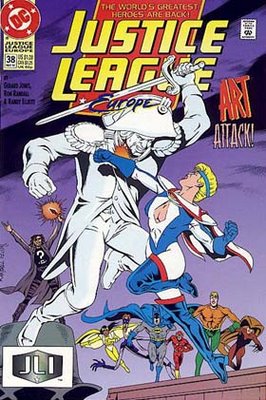 Gerard Jones had the unenviable task of following Giffen and DeMatteis, but Ron Randall’s smooth, clean pencil art certainly made the transition easy on the eyes.

Kara sported a news costume, including a headband, a diamond-shaped cut out to show off her cleavage, and blue, knee high boots. The costume didn’t age well—I blame the headband—but it was a great improvement over the white and yellow costume.

The quality of Jones’ run would dip as the cast changed (Tasmanian Devil, Metamorpho, Maya and Lionheart would join up, replacing Aquaman), co-writer Will Jacobs would come on, and the title would change to Justice League International, making League history even more confusing than it already was.

There was some weird storyline about Power Girl giving birth to a magic baby that grew up instantly to destroy the world or save it or something…It obviously wasn’t very memorable, and if anything about her history was rebooted during the “New Earth” rejiggeration. JLE/I ended after “Judgment Day” and Zero Hour. None of the above have been collected into trade, save Zero Hour, in which Power Girl barely cameos.

Power Girl would be MIA for the JLA pretty much from then on, as Grant Morrison’s late-‘90s relaunch wasn’t far at that point. P.G. would be relegated to crowd shots and cameos in JLA stories that required the reserves be sent in (Mark Millar’s fill-in issue, JLA/Titans, etc). In fifth-week event Justice Leagues, she appeared in the second and third parts, as a member of first Wonder Woman’s Justice League of Amazons and Aquaman’s Justice League of Atlantis.

Power Girl would rejoin some of her fellow former Leaguers in the second JLA: Classified arc, in which Keith Giffen, J.M. DeMatteis and Kevin Maguire sent The Supperbuddies to JSA headquarters and they all end up in hell and an alternate dimension. Hilarity ensues. For the last time, for many of the characters involved. It’s since been collected as I Can’t Believe it’s Not the Justice League!. 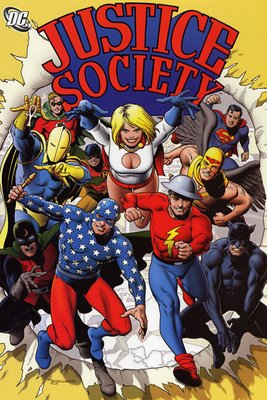 On Earth-2, the parallel dimension on which the Batman, Wonder Woman, Superman and the other Golden Age heroes existed pre-Crisis, Power Girl was one of the young heroes (including a grown-up Robin and the Star Spangled Kid) who applied for member ship in the JSA in All-Star Comics. Crisis on Infinite Earths wiped Earth-2 and all memory of it out of existence, collapsing the entire multivers into one, single Earth (Post-Crisis DCU continuity), but Infinite Crisis proved that Power Girl actually escaped whole from Earth-2 and, during her adventures, her memories of Earth-2 were restored.

Which puts Power Girl’s E-2 adventures back into continuity, for Power Girl at least (a flashback in JSoA #1, in which Wildcat seemingly remembers an E-2 story, muddies things; DC hasn’t yet revealed the nature of it’s post-Infinite Crisis universe). At any rate, Power Girls time in the Earth-2 JSA are collected in two trades so far, Justice Society Vol. 1 and Vol. 2.

In JSA #31, drawn, like all the best issues of JSA, by Peter Snejbjerg, Black Canary resigns from the team, but she names her own replacement. As Wildcat spit-took upon seeing her, “Not this broad—Not Power Girl!” P.G.’s been on the team since. 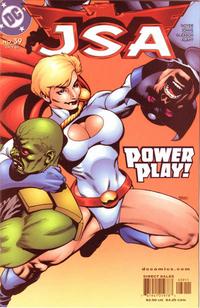 Among the most Power Girl-centric stories were #39, which is essentially a solo story featureing Power Girl, and #52-#53, in which she and Wildcat face the new Crimson Avenger. The entire series has been collected in trades; P.G.’s first appearance is near the end of JSA: Fair Play, and she continues to appear through JSA: Ghost Stories (this final volume is the only one I wouldn’t heartily recommend).


ELSEWHERE IN THE DCU: Always a bridesmaid, never a bride. When not on a team with the word “Justice” in its name, Power Girl could be seen in the pages of the Chris Claremont’s Soverign Seven, Peter David’s run on Supergirl (which DC is currently pretending never happened), David’s superlative Aquaman run (the single best Aquaman run of all time), Birds of Prey (where it’s since been revealed that she was one of Oracle’s first choices for a field agent, but things went disastrously), Resurrection Man spin-off Body Doubles (in which most of the DCU's female heroes appear at one point or another), and Brian K. Vaughan masterminded series Green Lantern: Circle of Fire (The trad eof which is currently out of print because, you know, who’d be interested in a BKV book?). None of these appearances are available in trade. I won’t discuss her appearances in the current volume of Supergirl because, honestly, the less one knows about the current volume of Supergirl, the better.


For more on Power Girl, check out Ragnell's appreciation, which is followed by a visual debunking of the popular Internet rumor of the secret origin of Power Girl's breast size.
Posted by Caleb at 5:27 PM

Thanks for the write up. Do you recall which issues of Birds of Prey featured said "disasterous run"? That would explain her "hell no" response during the latest recruitment drive.

Ain't it criminal that none of the Giffen-DeMatteis Justice League issues are in trade format?

I don't have longbox-ical proof, but I believe it was #38 or so. It was a flashback, and the gist is that some civilians died on the mission, and they blame one another for things going badly.

And yeah, the lack of JLI trades (like the lack of Ostrander Suicide Squad trades) is criminal; particularly considering how often the characters are being used in the modern DCU; you'd think some readers would be like, "Huh, who's this Max Lord guy? What's his story?"

Actually, I'm totally changing my answer. It's definitely not #38.