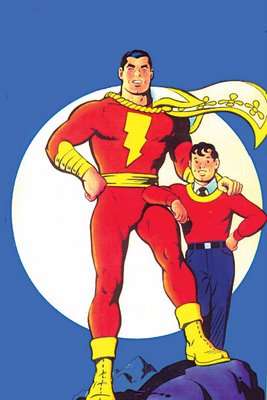 I love DC’s Showcase Presents line, which has been releasing phone book-sized collections of black and white reprints of their Silver Age material. Kind of like Marvel’s Essential line, except DC’s tends to reach back further. I’ve devoured nien of the collections they've released so far and enjoyed them all immensely, but the best by far has been Showcase Presents: Shazam!.

These issues come from the 1970’s DC revival, which paired new material with reprints of classic, Golden Age stories (only the ‘70s stuff is collected). The stories, oirignally drawn by C. C. Beck himself, explain where Marvel Family and Foes have been since the ‘40s, and then rather quickly acclimate them all to the “present.”

Captain Marvel, Captain Marvel Jr., Mary Marvel, superpower-less Uncle Marvel, and Tawky Tawny appear throughout, with the Lieutenant Marvels appearing in just one story. Classic villains Dr. Sivana (and his kids) and Mr. Mind appear the most, although Ibac gets a few spotlight stories, and Mister Atom and Black Marvel each get an issue apiece.

These stories are all Pre-Crisis, so they’re still set on “Earth-S,” although that only comes up once, and some other DC characters make some notable appearances. Lex Luthor appears by way of a dream and/or a malfunction of his recently invented “magic accumulator”, and he quckily teams up with Mr. Mind (“You’re my kind of man—er—worm, Mr. Mind!” Luthor sneers on the cover). Superman's likeness appears on a molten steel robot, which Cap clobbers (Can and Superman punching each other—it's like a staple of DC comics, isn't it?) A short-haired, young Kid Eternity guest-star in one tale and, man, has he ever changed in the last 30 years.

Late in the collection, the focus shifts from Golden Age-esque one-offs set in Billy’s nameless home city to more closely conform to the format of the Shazam! TV show, which had just hit the airwaves. Uncle Dudley grew a moustache, and he and Billy started traveling the country in a van, calling up the immortals who lend Captain Marvel his powers on the “Eterni-Phone” whenever necessary.

This road trip story spans the last eight issues collected in the book, and centers on Billy and Dudley’s trip to record patriotic pieces for their employers at Whiz TV. Coincidentally, first Dr. Sivana and then Mr. Mind are planning on destroying America one city at a time (for the Bicentennial celebration, naturally), and their targets neatly line up with Billy’s travel agenda. They’re all written by E. Nelson Bridwell, and feature pencil art by either Kurt Schaffenberger or Tenny Henson.

Each issue takes us to a different city, where we watch Cap have some sort of regional adventure (in Washington D.C., Sivana kidnaps Congress; in Pittsburgh, Sivana builds an army of steel robots to destroy all the steel mills, et cetera).

I was pretty surprised when I got to issue #31, in which Captain Marvel visits Columbus, Ohio. Ours isn’t a city that sees a whole lot of superhero action, and perhaps for good reason. While Captain Marvel’s visit to Detroit has Tawny trying out for the Detroit Tigers, a and his visit to Indianapolis involves him racing Mr. Atom in the Indy 500, Bridwell seems to have trouble finding something Columbus-specific for Cap to do while in town.

The adventure that follows, “The Rainbow Squad,” could happen just about anywhere. Unless Bridwell was using the title to make a coy reference to Columbus’ large, active gay population…? I don’t know; I was only seven months old at the time it was originally published, and I didn’t live in Columbus then, so I have no idea how gay the town was back then.

But if Columbus doesn't come across as well as Philladelphia or Buffalo do, at least our story is the one which reveals Captain Marvel’s Achilles heel—women.

“No man has been able to beat Captain Marvel, the World’s Mightest Mortal,” Bridwell’s breathless narration begins, “But women are another matter—that’s where Cap’s weakness lies—and he needs help from another hero—one from the Golden Age of comics—when he’s confronted by six super-females called…The Rainbow Squad.” 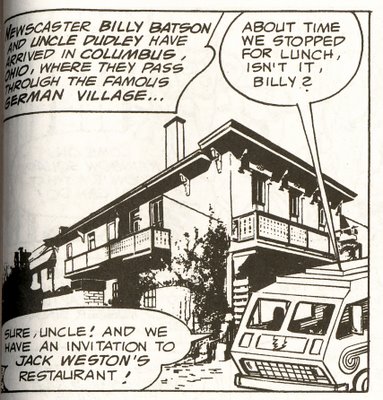 In the first panel, the Shazam van pulls into Columbus’ German Village, a building of which seems to be scanned into the background. I’d love to see an original of this, to see what it looks like in color, but here the background really seems to stand out as not drawn. No idea what building that is.

At any rate, Billy decides to stop at Jack Weston’s restaurant, humbly named “Weston’s,” for lunch. Jack welcomes our heroes at the door, and they remark how odd it is that he’s become a restraunteer, to which he mentions all the time he spent on K.P. in the war.

“Only because the sergeant didn’t know you were really Minute Man, The One-Man Army!” Billy says, and an asterisk lets us know that “Minute Man appeared in Master Comics, America’s Greatest Xomics and his own magazine from 1941 to 1944.

Wait, so Columbus has it’s own superhero—or, at least, it did in 1976—and his name is Minute Man? Well, I suppose it had different connotations back in the day, referring to the Revolutionaries and not Weston’s performance in bed. Now, what was an all-American hero with a patriotic name like Minute Man and a star-spangled costume doing in a comic with a name like Master Comics? Was Fascist Adventures all filled up? 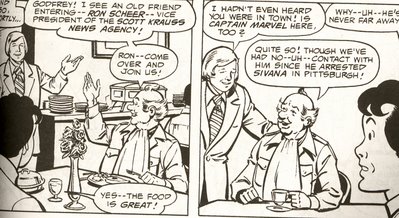 Once Billy and Dudley tuck in to their meals, a man with terrible hair enters, and Dudley announces, “I see an old friend entering—Ron Scheer—Vice President of the Scott Krauss News Agency!” I suspect that this is a real person, based on Schaffenberger’s careful rendering of his face, Dudley's use of his title as if he were reading it off a business cardm and the fact that each city has a similar media executive type appearing to foreshadow the conflict.

While they make small talk with Scheer, in rush the Rainbow Squad, six women in silly costumes who want everyone's valuables.

“Those dames must be loony! They don’t even have guns!” a male patron says, and the men all wade into the women, expressing their reluctance to punch women in the face. But wait, what’s this? They each have a superpower, and make asses out of all the men.

Enter Captain Marvel, but they have a secret plan to deal with him. 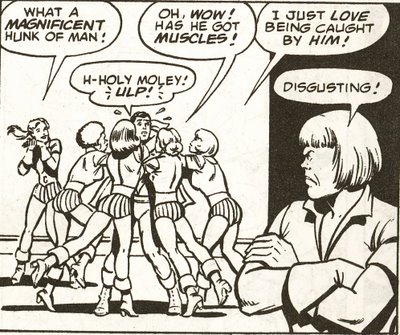 “Can’t think straight—have to get out,” Cap thinks to himself while fleeing. Outside, he walks sadly away, completely ignorant of Dynamoll’s blasting him with atomic radiation from behind, as he talks to himself about his predicament: “I don’t understand why beautiful women making a fuss over me does that to me—but I can never get my head straight when it happens!What can I do? I can’t beat up on those girls!”

Meanwhile, the ladies return to the hideout of handsome, vain and slightly off Mr. Wonderful, the man who gave them all their miraculous superpowers through his rainbow machine. He explains, “I chose women because I knew they constitute a weakness on Captain Marvel’s part!”

Meanwhile, Weston and Dudley consult Achillies via Eterni-Phone, and the elder who gives Cap his courage advises them that “Women can be troublesome… It was a woman who caused the Trojan War--and a quarrel over another led to my decision to stop that conflict!” He goes on to cryptically tell Weston to avenge Cap’s defeat. 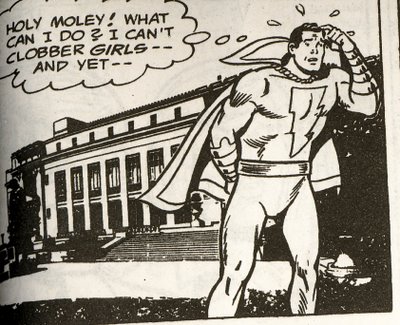 Meanwhile, Cap is still wandering the city, contemplating his problem of not being able to clobber girls, and we see him in front of City Hall (It’s hard to tell in the black and white reproduction, and my crappy scan of it, but that black blob seems to be the statue of Christopher Columbus downtown). 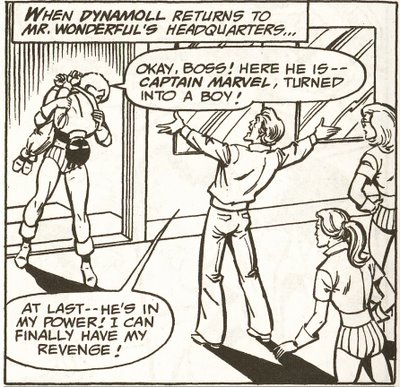 Dynamoll sneaks up on Cap again, and this time she uses lighting on him, as Mr. Wonderful advised. Changed back to Billy, they put place im under a five ton weight which is somehow suspended near the ceiling by a thin rope, which he intends to cut, Billy “like a worm!"

But in rushes Minute Man at the last, er, minute to pull the gag from Billy’s mouth. Two syllables later, the weight crumbles harmlessly on top of Captain Marvel’s invulnerable head.

It’s Captain Marvel versus the dames, round two!

This time, the Squad eschews seducing Cap for plain old super-violence. He’s still afraid to hit them, but once Minute Man starts getting his ass kicked (figures our hero would have a lame name and be no match for the Rainbow Squad), Cap rallies and enters the fray, letting the women take themselves down by running into one another and bruising their knuckles against his invulnerable chin.

Having brought an end to the Rainbow Squad, Cap attends to thier leader. One Marvelous punch knocks Mr. Wonderful into a thousand pieces with a “KRAA-AMM!” What's this? Mr. Wonderful is just a robot? And inside the head—why, it’s an old foe.

“You mean we’ve been working for a worm ?” an incredulous Squad member asks. 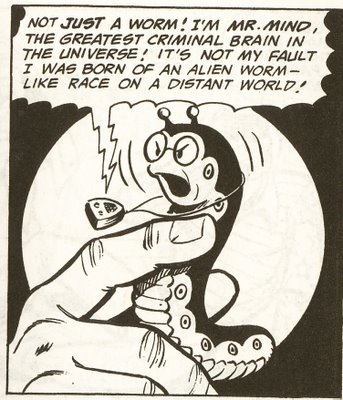 Mind slithers away to safety, and the CPD arrive to load the Rainbow Squad into the back of the paddy wagon. Minute Man vows to stay in the hero game, “I realize now what my life’s been lacking these last few years--excitement! You may be seeing Minute Man in harness a lot from now on!”

Or we may not. That’s the last Minute Man appearance I’ve ever seen, but who knows, maybe he went on to totally defeat all super-crime in central Ohio over the next 30 years, before deciding to go back into retirement. That would certainly explain why there are no supervillains in Columbus at the moment.
Posted by Caleb at 7:14 PM