Dear next Booster Gold writer, may I make a suggestion or 65? 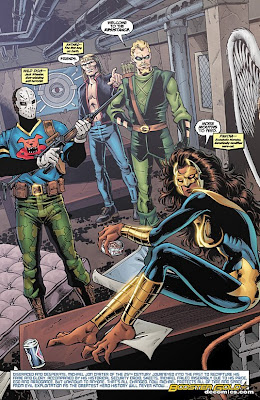 When seeking cannon fodder to fill-up an alternate timeline in the current Booster Gold story arc, writers Jeff Katz and Geoff Johns unearthed Max Allan Collins and Terry Beatty’s Wild Dog, a super-vigilante character that starred in all of five comics in the late ‘80s.

I can see that the appeal of the Booster Gold title could be quite limited, but the fact that it’s a book in which Wild Dog can appear is one of its greatest strengths. It’s a comic book about the time stream of the DCU, which means it’s also a comic book about DC comics and the company’s publishing history and, thanks to the smaller outfits they’ve gobbled up over the years, that’s a lot of comics and characters. No matter when the comics were published or when they were set, characters and story elements from them can turn up in Booster Gold.

So far our hero’s teamed up with the Silver Age Flash, lost a drinking contest to deformed cowboy Jonah Hex, nearly got killed by Alan Moore and Brian Bolland’s notorious Batman: The Killing Joke one-shot and crossed-over with 14-year-old event comic Zero Hour.

Recently it’s been announced that Katz and Johns will be leaving the title after just four more issues. Does that mean the series is doomed, or will a new writer be able to keep it going?

I hope the latter. After all, there are a lot more stories I’d like to see. Sixty-five of them, to be exact.

For example, in no particular order…

The 853rd Century’s Legion of Executive Familiars
Enemy Ace and Balloon Buster
Biff Bradley
Slam Bradley
The Crimson Avenger (hat, not fin)
The original Global Guardians line-up
Viking Prince
The All-Star Squadron
The Young All-Stars
The Justice Experience
Zatara, two-fisted magician
The Red Bee
Vandal Savage and Ra’s Al Ghul…in the Jazz Age
Uncle Sam
Robby Reed
Pablo Picasso (stealth crossover with The Salon)
The Losers
The original Red Tornado (with the bucket helmet)
Pre-butler Alfred Pennyworth
The Old Gods (the ones who died to make way for the New Gods)
Arion and/or Atlan
Elongated Man and Sue (Showcase Presents era)
The Haney Batman, complete with Whirly-Bat
A Post-Infinite Crisis version of Wonder Tot
Streaky the Super-Cat and/or Comet the Super-Horse
Davy Crocket
Abraham Lincoln
QWSP (mischievous, not malevolent)
The Jester
Golden Age Airwave
Some New Bloods (I like Nightblade, Sparx and Anima best)
Rex the Wonder Dog, from back in the day
Superboy and The Ravers (featuring Rex the Wonder Dog from the ‘90s)
The lady versions of Wildcat and Dr. Mid-Nite (and their terrible, terrible costumes)
The Golden Age Manhunter (the one with the dog)
Signalman (pre-Meltzer)
Claw the Unconquered
The Vigilante (cowboy version)
The Inferior Five
Captain Compass
King Faraday
The (late) Question
The Justice League that only existed in 52 #24
The Justice League from right after Superman died (the one with Agent Liberty, The Ray and Black Condor)
Tomahawk
Aztek
Golden Arrow
Azrael, The Eradicator and Artemis
Red-suit Hawkman
The Blackhawks
Sugar and Spike
Edgar Allen Poe
Jonah Hex from Hex
Wesley Dodds, all Sandman Mystery Theatre-ed out
The Forgotten Heroes (this version)
Conner Hawke, Tim Drake, Koryak, Impulse and Cassie Sandsmark
Grown-up Lian Harper
The Unknown Soldier and Human Target
Elongated Man and Plastic Man
Superman, King of the World
Blue Devil (Year One)
The original Robotman
The Heckler
Primal Force
Posted by Caleb at 5:41 PM

I'm not sure what every one of those on the list are exactly, but the ones I do know (most of them) are great suggestions, and it would be a damn shame to pass up the opportunity.

Gosharootie, this is a lovely list. I particularly like Viking Prince, Enemy Ace and Wesley Dodds for some reason. If Booster teams up with Wes, he'll be the SMART one!

I'd like to throw in the Shade too. I don't think that Booster would have a CLUE as to how to interact wtih the Shade, which could be a lot of fun.

I especially dig the Blue Devil Year One request...but there are so many other great ones there, too.

Wild Dog. Man. Freaking Wild Dog. Talk about shooting nostalgia through me. That was my first really violent comic. It just lights me up to even think about it. I don't even really remember it that well, except I was just old enough to dare buying it and just young enough to worry my mom would see it and get mad at me.
Wow.