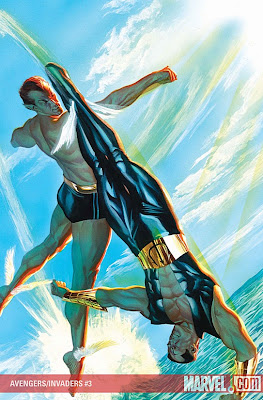 Based on how bad Project: Superpowers has been, I’m kind of afraid this might not be any good, but I’m definitely going to read the first three issues for the Namor on Namor action.

And by “action” I mean “fisticuffs” not, you know, the other kind of action. Although I could see the Namors doing that too. I mean, if you met yourself from a different point in your time line, I’m sure you’d, you know…right? Let's just move on.


CAPTAIN AMERICA #40
Written by ED BRUBAKER
Pencils & Cover by STEVE EPTING
It's Cap versus Cap for the future of the American Dream as the Red Skull looks on in laughter! And Bucky learns the true identity of the man behind the other mask! The epic Death of Captain America continues in Part Four of "The Man Who Bought America" by the acclaimed team of Brubaker and Epting. 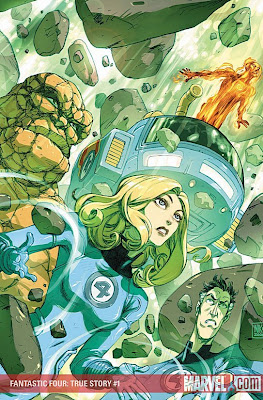 FANTASTIC FOUR: TRUE STORY #1 (of 4)
Written by PAUL CORNELL
Penciled by HORACIO DOMINGUEZ
Cover by NIKO HENRICHON
A threat to the minds of the whole human race sends the FF somewhere they've never been before: into the realm of fiction itself! Where Ben finds himself clobbering a demonic army to save the cast of Sense and Sensibility. No, really. And it gets weirder from there. Dante (not the one from Clerks)! Willie Lumpkin! Behold, the Fictocraft! And it's actually kind of smart and serious too. You're at least going to flip open the first page in your comic store, right?

This sounds like a ton of fun. Too bad Henrichon isn't doing more than the cover, though. I'd love to see some more interior work from that guy.


IMMORTAL IRON FIST #17
Written by DUANE SWIERCZYNSKI
Pencils and Cover by TRAVEL FOREMAN
"The Mortal Iron Fist" part 1 of 4
Marvels' kickingest, punchingest, kung-fu-iest book just got bigger! Following the character-redefining, critically-acclaimed, fan-favorite events of "The Seven Capital Cities of Heaven," the all-new IMMORTAL IRON FIST creative team of Duane Swierczynski (CABLE) and Travel Foreman (ARES) takes it to the next explosive level! Think you know everything there is to know about the traditions of the Immortal Iron Fist? If you do, then why's Danny sweating bullets over an inescapable legacy that's haunted the Iron Fists for centuries, huh? Tell us that, if you're so smart. What was the deeper meaning of Xao's ominous threat? And what incredible new adventure are Danny's fellow Immortal Weapons embarking upon?

And so begins the books probably short, fast march to cancellation… 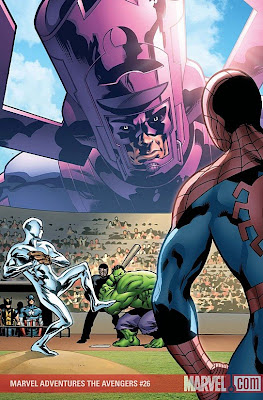 I was going to make a joke about the juicing in major league baseball and a gamma-powered Hulk at the bat, but really, all that needs to be said here is that it's good to have Jeff Parker back on Marvel Adventures Avengers. 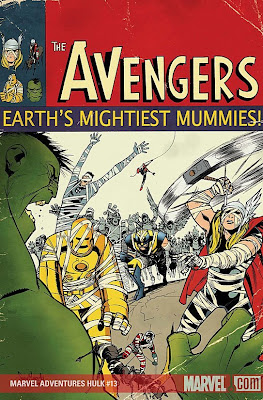 MARVEL ADVENTURES HULK #13
Written by PETER DAVID
Penciled by JUAN ROMAN
CANO SANTACRUZ
Cover by SEAN GORDON MURPHY
Hulk and his traveling buddies (fun-loving teen, Rick Jones and rollicking monkey, Monkey) have returned to New York City to find something amiss… all the super heroes have been transformed into ravenous, stumbling monsters! But can even the strength of the Hulk stand up to the unstoppable… MARVEL MUMMIES?!? Fan-fave Hulk creator Peter David comes to Marvel Adventures Hulk with unlucky issue 13, bringing our most mummified issue ever!

Will mummies be the new zombies? If you read but one Marvel book in July, this should probably be the one.


MARVEL ADVENTURES SUPER HEROES #1
Written by PAUL TOBIN
Penciled by ALVIN LEE
Cover by ROGER CRUZ
It's probably a bad sign when Hercules comes asking for a favor. It's juuuuuust a little job that needs doing, but this is Hercules; isn't he supposed to be REALLY good at doing labors himself? Before they know it, Iron Man, Spider-Man and the Hulk are stuck looking after Orthus and Cerberus, the two legendary hounds of the underworld! Luckily, the dogs learn to behave after chewing up only a few cars, a statue, and Iron Man, and finally they're obedient enough for the Metro Dog Show! Only problem, Hercules wants the dogs back. Oh no, Herc, not before the Hulk gets his ribbon! It's two dogs with five heads between them, and all the action you can handle.

You know, the words "Orthus," "Cerberus," and "dog show" are all you really need to make a comic book sound worth buying. But throw in some Marvel superheroes and Hercules? It's solicitations like this that make me think they could really just go ahead and cancel all the 616 books. 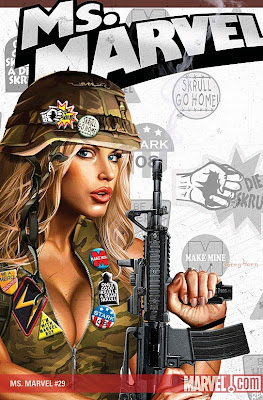 Greg Horn does cheesecake. Sometimes it's good, sometimes it's godawful. But this month? It's freaking great. I think his cover work works best when there’s a sense of humor about it.


PATSY WALKER: HELLCAT, AGENT OF THE INITIATIVE #1 (of 5)
Written by KATHRYN IMMONEN
Penciled by DAVID LAFUENTE
Cover by STUART IMMONEN
Patsy Walker, S.H.I.E.L.D. wants YOU to join the Initiative…and protect the frozen north. You heard me right, sister. The Klondike. Seward's Folly. Alaska. So pack some long johns and prepare for trouble. GUEST-STARRING: IRON MAN!

This is an awfully awkward title, which seems like half a title too many (Either Patsy Walker: Hellcat or Hellcat, Agent of the Initiative would be a more natural sounding construction). Of course, I'm assuming they had to get "Patsy Walker" in there to renew the trademark or something because, honestly, why else would they bother publishing a Hellcat story?

I do look forward to Annihilation: Millie the Model next summer.


SQUADRON SUPREME 2 #1
Written by HOWARD CHAYKIN
Penciled by MARCO TURINI
Cover by GREG LAND
"POWER TO THE PEOPLE" PART 1 (OF 6)
They were gods walking the Earth… powerful but flawed, they dreamed of remaking the world in their image. After their apocalyptic battle with Redstone, and after their terrifying fight with the Ultimate Universe, that dream has become a nightmare. While mankind struggles to rebuild, new heroes appear—and Nick Fury, left behind after the hit ULTIMATE POWER limited series, learns the shocking secrets of four astronauts who returned to Earth…changed. Join comics legend HOWARD CHAYKIN and newcomer MARCO TURINI to ask the question—whatever happened to the Squadron Supreme?

Ohhh, so that's where Ultimate Nick Fury's been...? I was wondering why he's been MIA in Ultimate Spider-Man and Bendis was using Ultimate Carol Danvers instead. I assumed it was just because he liked the character and wanted to use her.


TRUE BELIEVERS #1 (of 5)
Written by CARY BATES
Pencils & Cover by PAUL GULACY
"PAYBACK IS A BITCH"
Super heroes running a female fight club? Unbelievable perhaps, but it's a tale of depravity that will send shockwaves across the globe once the sordid details appear on a podcast uploaded by the TRUE BELIEVERS! Who are these counter-culture subversives with strange powers and abilities who have proclaimed themselves 'warriors of the information age'? The True Believers not only speak truth to power, they wield it like a weapon using it to root out lies and deception, cover-ups and conspiracies wherever they find them. Whether it's S.H.I.E.L.D. or the Illuminati, HYDRA or Weapon X, the CIA or the CSA, no target is too big and no one is off-limits—including a wary superhuman community with plenty of its own secrets to hide!

I'm kind surprised it's taken so long for Marvel to title a series this.
Posted by Caleb at 4:01 PM

I hope you're wrong about Iron Fist being on the march to cancelation. I too would have liked Brubaker, Fraction, & Aja to stick around longer (couldn't Bru have dropped Uncanny X-Men instead?). But Swierczynski is a talented heist writer (I really enjoyed his first novel The Wheelman)and a friend of Brubaker's. Don't judge him by the Cable writing credit. So hopefully he can maintain the audience and the level of quality the title has had thus far.

Bob, the title will may still do well, if people bought comics based on what was a good read, rather than `other factors', but y'know, I dont think I need to explain to anybody here that that's unlikely.

Um, I would pay good money for three issues of Namor-on-Namor action, and I don't mean fisticuffs...

Did Ultimate Power even end? That was the longest, slowest miniseries... And I actually like both the new Squadron Supreme and Ultimate Universe. Them fighting alot should have been fun. But it was boring, right from the get go. Even Mightygodking's parody wasn't that interesting.

I think you'd have a point if Swierczynski were starting a new Iron Fist monthly ex nihilo. If that were the case I doubt many folks would try it and it'd probably be canceled, even if it were God's gift to comics. But Swierczynski is coming on to a fairly popular book. Assuming he can maintain a certain level of quality (and his previous writing leads me to believe that he can), then why shouldn't the book retain its audience and continue to be moderately successful?

My (completely inexpert) reading of Iron Fist was that it's been something of a surprise success, but not a blockbuster. That it's very well-liked by critics and bloggers and has a very loyal audience, but sells moderately (if not poorly). And that the reson is is so popular is becaue of the creators more than the character.

Of course, the one thing that those creators did was give the character a particular definiton and direction, so it's not impossible for a new creative team to keep it alive by following in their footsteps, but I'm not terribly optimisitic.

But hey, Marvel's still publishing Moon Knight and that guy's not even an Avenger...

Hey there, hope you don't mind, I tagged you on a meme thing, because I'm gettin all nerded up for the weekend: