A few quick thoughts on a few recent announcements 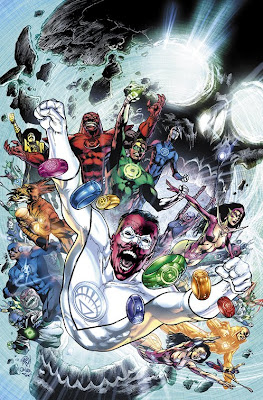 I just don’t think white is a good color on Sinestro, given his coloration.

That said, I am glad he got the white ring instead of Hal Jordan (whose coloration wouldn’t look too much better in all-white anyway; that’s a hard color to pull off!), and I hope Geoff Johns leaves it on Sinestro’s finger through the end of the eighth and final issue of Blackest Night.

I think the Bad Guy Who Always Thought He was Doing the Right Thing Finally Gets a Chance to Actually Do the Right Thing story seems a lot more interesting than The Writer’s Favorite Character Saves the Whole Universe and Everyone Continues to Love Him for Being the Best Ever story, you know? 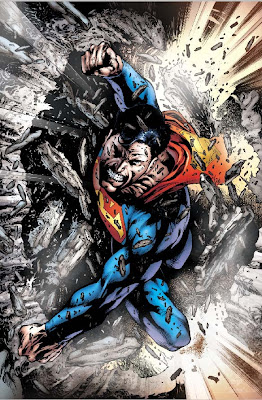 So Eddy Barrows is going to be J. Michael Straczynski’s collaborator on Superman, huh?

I was kind of curious about what JMS’ Superman would be like, but I don’t care for Barrows’ artwork...so much so that I’ll definitely be skipping this (Superman seems to be really exerting himself on that wall up there, doesn’t he? Why’s he trying so hard? It’s just a wall. And what’s with the anguished grimace? That wall must not only be really strong, it must be a real jerk to get Superman so angry).

With Marc Guggenheim taking over Action Comics, it looks like I’m going to continue to steer clear of the Super-books for the foreseeable future. The scripts of Guggenheim’s I’ve read have all lead me to believe he’s a fair writer—not brilliant, not bad enough to go out of one’s way to avoid—but I really don’t feel like paying cash money for comics written by the guy who said some really stupid things about gay marriage, civil unions and the Spider-Marriage while trying to promote his books that one time.

Oh well. There’s always that Superman: Earth One graphic novel series of JMS’…that’s still on, right? They haven’t decided to drop that and just run JMS’ planned stories in the main Superman title, have they? (Because now that I think of it, I guess it is somewhat weird to have the same writer on both versions of Superman simultaneously). 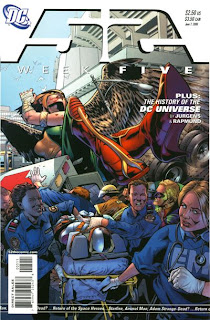 Speaking of Straczynski, this sounds like the same idea as the meta-human hospital introduced in 52, except his super-hospital has a different name and is located in a different city.

Actually, the second issue of the last volume of TMNT featured Michelangelo being taken via flying ambulance to a secret superhero hospital, and the Action Age’s Awesome Hospital seems to cover some similar ground. I’m not accusing JMS of ripping the idea off of anyone. “Superhero hospital” isn’t that unique an idea; it’s basically just a riff on all the similar superhero plus some mundane real world business ideas that have popped up in superhero comics over the years. You know, your superhero tailors, superhero bars, supervillain bars, supervillain real estate agents, etc. But the fact that the DCU already has one and JMS went ahead and made up a second one seems kinda strange to me. 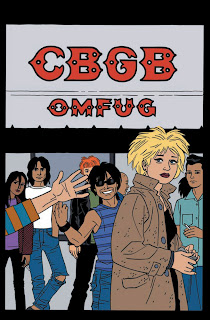 I don’t generally like to just republish press release-type stuff here unless I have something to say about the comic or book being hyped, but Boom Studio’s forthcoming CBGB miniseries, bearing the name of the legendary rock club and devoted to “portraying the tales of music, discovery, heartbreak, confusion, rebellion and greatness.” The image above is the cover of the first issue, by Jaime Hernandez (obviously), and the creative roster includes comics people Kieron Gillen, Rob G., Chuck BB, Kelly Sue DeConnick and newcomers to the field like Ana Matronic (of the band Scissor Sisters), Sam Humphries of MySpace and Kim Krizan (screenwriter of Before Sunset and Before Sunrise).

Boom sent out an electronic copy of a special one-page story being used to promote the series. It’s drawn by EDILW favorite Chuck BB. Check it out: 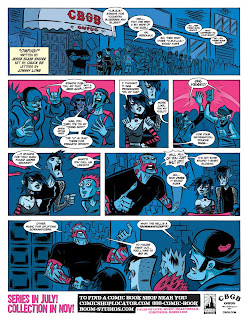 that cbgb comic looks good so far. chuck bb is a perfect choice for a miniseries such as this. the hernandez cover is befitting as well. will most likely pick up the collection but might pick up the first ish just to have and hold me over til the collection comes out.

being a native new yorker cbgb's is missed.