It shouldn’t have surprised anyone, least of all Marvel, when new “ongoing” series S.W.O.R.D. was canceled with its fifth issue, lasting less issues than many miniseries.

The creators were up-and-comers Kieron Gillen and Steven Sanders, and the subject matter was a space version of Marvel’s S.H.I.E.L.D. agency. It was always going to be an uphill climb, but Marvel seemed to have made the incline all the steeper by launching it at an odd time and with their usual counterintuitive pricing strategy.

One of the stars was S.W.O.R.D. Commander Brand who, like the agency, was introduced by Joss Whedon during his popular but erratically published Astonishing X-Men, which managed 24 issues between 2004 and 2008. Brand and S.W.O.R.D. received a bit of the Marvel’s brightest limelight again during 2008 series Secret Invasion. But S.W.O.R.D. #1 didn’t launch until late 2009, well after the metaphorical iron was cooling.

The first issue, like many of Marvel’s first issues, cost $3.99. It included a back-up, so it wasn’t one of the Marvel books that cost 33% more than some other Marvel books of the same size, but it was still a somewhat bigger investment for potential new readers, the opposite strategy that’s employed when Vertigo kicks off a new series with $1 first issue.

Are those factors alone enough to explain why ongoing S.W.O.R.D. didn’t keep going?

Or does it perhaps have something to do with Marvel’s price increases among their best-sellers and their market-flooding publishing strategy leading to Marvel fans being unable or unwilling to try new Marvel series? (After all, if you’re committed to reading all those Deadpool or Hulk or Wolverine or now Avengers books, there’s a good chance you’re buying less new off-franchise series instead of simply spending more money each month on comics).

Or could the content of the book itself have had something to do with the quick death of the book? Having just read X-Men: S.W.O.R.D.—No Time To Breathe, the just awfully entitled collection of S.W.O.R.D. #1-#5, I can attest that while the book was a quite excellent almost sitcom-style comedy with rather unique artwork, it’s like almost nothing else Marvel publishes.

It’s certainly nothing like the John Cassaday covers promise—the only thing Sanders’ Beast character design has in common with Cassaday’s is that they’re both colored blue, for example. I can certainly imagine fans getting whiplash by turning the cover of the first issue, and deciding Sanders’ artwork wasn’t what they wanted.

Well, it’s not up to us to figure out what went wrong with S.W.O.R.D.—that’s Marvel’s problem (and, depending on the exact reasons, perhaps the direct market’s problem). From a reader’s perspective, absolutely nothing went wrong with S.W.O.R.D.—it’s a really great, really fun comic book, set in a super-comic universe and playing with some Marvel-owned toys, but doing such unusual things with them that the book’s Marvel-ousness seems merely a matter of surface detail.

Remarkably, the book doesn’t even feel cancelled. Gillen’s plotting is so tight that the volume ends up being a completely complete story, with no real dangling plotlines or disappointment regarding future roads not taken (With one exception—for some insane reason, the back-up from the first issue is included, between the chapters that constituted the first and second issues of the book. So after the first twenty-some pages of Gillen and Sanders’ stories, there’s an eight-page interruption beginning with the words “Enjoy this exclusive bonus story!” in the first panel, illustrated by Gillen’s Phonogram partner Jamie McKelvie. It is essentially nothing more than eight pages of explanation about why X-person Kitty Pryde hasn’t returned in this book yet…a book which has only had a single issue and one-fifth of a story at that point).

Gillen’s Brand isn’t a terribly deep or fascinating character. Instead, she’s a fairly standard comic book—modern Marvel comic book in particular—person in position of power. Bossy, angry, focused and quippy, she’s less acerbic than Warren Ellis’ version of this sort of character, and perhaps closer to Brian Michael Bendis’ or Matt Fraction’s or Ed Brubaker’s or Greg Rucka’s version of this sort of no-nonsense, all-business woman of action.

Basically, you can tell she’s not Maria Hill, but only because she has long green hair and wears sunglasses.

Brand is apparently dating the X-Men’s hair cat-man character Henry “Beast” McCoy, who is also apparently her subordinate in S.H.I.E.L.D. They never really get into why a normal-looking—if green-haired and super-heroine bodied—woman is dating a blue were-cat looking dude, but when we meet Brand’s alien brother (she’s half-alien, apparently), he appears to be covered in green fur and has a snout like Sanders’ Beast, so maybe Hank reminds her of her father?

So this is essentially the story of an extremely busy day in the life of this super-power couple in their high-pressure job at The Sentient Worlds Observation and Response Department, which is responsible for everything from stopping alien invasions of earth, space alien immigration issues and mediating conflicts involving alien races. Or, perhaps, this is just their typical day, rather than a particularly busy day, which I suppose only accents and underlines the zaniness of it.

I mentioned the sitcom-style of the set-up earlier, although I suppose that sounds like an insult—I suppose one could also compare it to classic screwball comedy, as our couple verbally spars throughout, although it’s Brand who seems the workaholic, while Beast is the playful, funnier character there to tell jokes and occasionally be referred to as a sex object by the other half of the couple.

So, what do they do on this very busy day? Well, Henry Gyrich, long-time Marvel Universe government bureaucrat a-hole (When Bendis re-positioned Norman Osborn as the leader of the Marvel Universe during “Dark Reign,” he was essentially writing Osborn as Gyrich) has been named Brand’s co-Commander, and is trying to take over the organization through governmental bureaucratic warfare. Meanwhile, extremely powerful, extremely dumb aliens are invading earth. Meanwhile, giant robot bounty hunter Death’s Head is trying to capture Brand’s alien smuggler brother, who has come to her for sanctuary and/or rescue. Meanwhile, Brand’s lisping number two man Sydren (that’s him on the cover) is forced to stall negotiations with another set of hostile aliens, who are also trying to invade earth. Meanwhile, a monstrously powerful and morally ambivalent sentient super-computer in the shape of a man is held prisoner in the basement of S.W.O.R.D. headquarters, pushing his own agenda by helping various parties.

There is a lot of fighting and running around and flying in space ships, but the mode here is comedy—specifically, a situational comedy. It’s not the sort of Marvel comedy that one might find in, say, some of Jeff Parker or Fred Van Lente’s looser, zanier work, but character comedy arising from the conflicts and dialogue.

Plus the occasional sight gag, like Sydren talking about how negotiations are going while the characters he’s negotiating with are shown sharpening a knife in the background, or this frozen moment from early in the story: 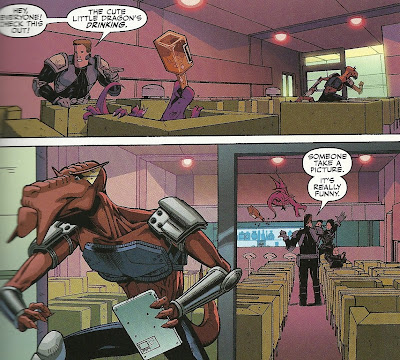 I remember reading reviews of and message board comments about his series as it was being serially released, and I know Sanders’ art was something some fans took issue with. I pretty clearly remember someone referring to his Beast as looking like a donkey, which I thought was intriguing (usually, fans refer to either “cat-Beast” or “ape-Beast” to describe his two looks).

Well, his Beast actually looks more like a kangaroo to me. That is, the blunt, rectangular snout reminded me an awful lot of Booga, Tank Girl’s furry lover (although I suppose the fact that Tank Girl was another comic book starring a sexy woman and hairy anthropomorphic animal lover might have had something to do with that). 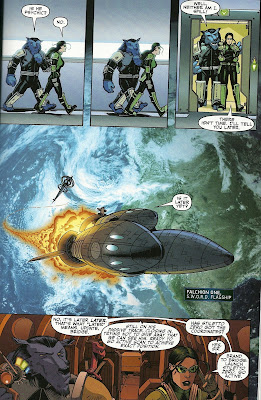 (Apologies for the poor quality of the scan. I've only been doing this for, what, four years now? I'm sure I'll get the hang of scanning panels from comic books eventually).

I liked this beast. It’s the cat version, but closer to the cat version that Frank Quitely designed for New X-Men, rather than Cassaday’s redesign of the character at the start of Astonishing X-Men. He’s got a big, cartoon lion-like face, long, mane-like hair, and his proportions aren’t human; his head’s bigger than his body, which is stocky and sometimes looks square-shaped.

Sanders explodes the alien designs a bit, so they all seem a bit more whimsical than the humans, who are all drawn more or less straight—his Gyrich is capable of some pretty cartoony facial expressions though. The result is a book where the aliens look all the more alien, and the visual tone is perfect for the verbal one. This is, after all, a comedy, albeit it one set in a serious story that takes place in a serious shared universe.

Sanders may have just gotten lucky with colorist Matt Wilson, or Wilson may have just shown a lot more care than many Marvel colorists, but the colors don’t squash or bury Sanders’ artwork as is so often the case these days.

I think this trade, despite its lame-o title and not particularly good cover—Brand looks kinda Hobbit-like there, doesn’t she?—ended up being one of the best Marvel Comics-published stories I’ve read in recent memory.

So of course the book didn’t last that long. Caviar for the masses? Eh, I don’t dig on fish eggs. But it certainly was a treat.

Check out Lockheed's sense of decor in his quarters: 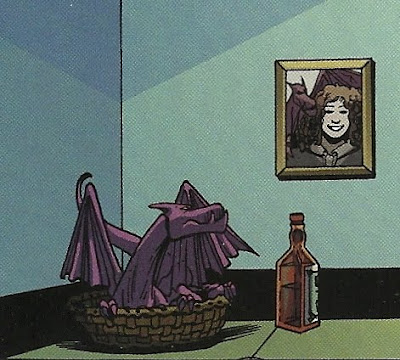 A doggie bed, a single framed photo and a bottle of liquor—I believe that's what they call "spartan."
Posted by Caleb at 1:14 PM

This version of Beast took awhile to grow on me, but by the 5th issue I was actually starting to like it...

I also love how well this meshed with Gillen's Beta Ray Bill mini-series. The one where BRB goes hunting Galactus...

Caleb, I think you are the first reviewer I've run across to get that Lothi looked like Beast on purpose, rather than reading it as my inability to draw a variety of character designs. Good work, and glad you liked the book, sir!

That sounds like something I absolutely need to read. My all-time favorite superhero comic is Giffen/DeMatteis's Justice League, which is nothing if not a sitcom.

Sigh...to think that we could have a Marvel Comics that publishes ongoing SWORD, MI-13 and Atlas series...and instead we have one that publishes 18 Deadpool books a month.

This series was a *lot* of fun.

Question: Why does Gyrich keep getting bureaucratic assignments? He's disliked, distrusted, or actively hated by a very large number of the people he's supposed to work with/ supervise/ whatever. At some point you'd think, say, Val Cooper would start to tell new Presidents, "Insofar as we want to maintain good relations with the superhumans-- or insofar as we want to save up pissing them off for important things-- you really need to find another portfolio for Henry, sir. I know he says he's indispensable. But I believe that if you call up Steve Rogers or Tony Stark, they'll tell you exactly how dispensable he is."