1.) The flying saucer is labeled "Speaker Pelosi," which in a political cartoon means that the flying saucer is a symbol for Speaker of the United States House of Representatives Nancy Pelosi. So—just so we're all clear here—in this particular scenario, involving a flying saucer, flying orange robot heads and two middle-aged white people holding a "No Mosque At Ground Zero" sign being generously referred to as a protest, Nancy Pelosi is a flying saucer.

2.) Based on the few visual clues provided, these protesters are not protesting at ground zero, or in New York City at all, but out in a field somewhere. At night.

3.) The sentient flying saucer that is Nancy Pelosi is sending floating robot heads, which she refers to as "the probes," down toward the two protesters, but at the same time, she/it says, "Find out who's funding this protest." The probes are thus going to simultaneously literally "probe" the protesters in this cartoon as a metaphor for Pelosi's desire to metaphorically probe them in real life and also metaphorically "probe" them within the context of this cartoon to find out who is funding them. I guess...?

4.) In choosing to play off the word probe by imagining an aliens-probing-people visual metaphor in this cartoon, the cartoonist chose to imagine a scenario involving a flying saucer and flying robot heads probing humans. I just finished the final volume of Jerome Clark's three-volume UFO Encyclopedia from Omnigraphics, so I'm sure this is fresher in my head than the majority of people trying to puzzle out this stupid cartoon, but I'm pretty sure that nowhere in the UFO literature is there a single report of a flying saucer sending flying orange robot heads down to earth to probe people. Generally probing—i.e. sticking things in people's butts—occurs when the aliens take their victims aboard their ships.

I'm not faulting the cartoonist for inaccuracy here, I just wanted to point out that the cartoonist apparently decided to make an alien/probe reference in the cartoon, and then decided to bypass the most popular scenario of aliens probing that exists in most people's minds to invent a different one.

Given the fact that Nancy Pelosi looks a bit more like the sort of alien usually described in abduction reports than your average speaker of the house, the cartoonist therefore missed the opportunity to draw Pelosi as a gray alien. I am not a political cartoonist, obviously, but I imagine Nancy Pelosi and/or gray aliens would be fun things to draw.

I was also a little surprised at the point-of-view of the cartoon, which seems to be sympathetic to the protesters who are, make no mistake, protesting against freedom of religion in the United States of America, which is among the most fucked-up things I've seen in my life. I was curious about how unusual it is for a political cartoonist to address the issue in any direction other than, "Man, these protesters are terrible, evil and/or ignorant people," so I clicked on the "Ground Zero Mosque" gallery at Daryl Cagle's Political Cartoonist Index, and while I did find at least one cartoon expressing my point-of-view on the subject... 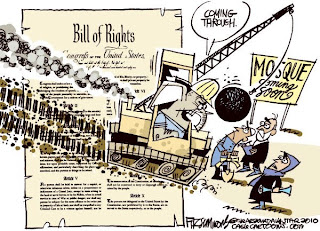 ...my God was that ever a depressing gallery. I was almost afraid to click on the galleries "Obama's Mosque Mess" and "Obama Is A Muslim".

As depressed as the, um, beliefs of so many of my fellow Americans has made me, David Fitzsimmons' style cheers me up. I love the shape of those little people at the ground-breaking ceremony above. If you find yourself feeling blue, I'd highly recommend spending some time flipping through Fitzsimmons' archives. That guy's economic use of shapes and lines, and his bold, chunky figure designs never fail to cheer me up.

Finally, on the subject of modern political cartooning, if you haven't visited Kate Beaton's site lately, do be sure to check out her latest strip, "Ben Franklin's Editor".
Posted by Caleb at 6:49 PM

Yep; as you put it. The argument is east to refute: "Bill of Rights. Check the first one. QED." It is almost too easy, since the people who are angry about the Muslim YMCA are willing to go "This isn't a First Amendment issue," or "I'm all for freedom of religion, BUT..." & toss the Constitution under the bus.

You know, there are people who genuinely believe that the US is a "Christian Nation," or that it should be officially considered one. Maybe they don't live where you go, and they didn't see to live where I grew up, but they exist in this country, and in scary numbers (that is, any at all).

I've had one of these nuts argue to me, "The majority of America is Christian; therefore, it's a Christian nation."

I'm not in favor of the mosque, nor am I against. It means nothing to me on any possible level I could give a rat's ass about. However, the public protesting the building of a mosque doesn't have jack anything to do with the Bill of Rights. If the government passed a law preventing the mosque from being built, then, although there would be many a Constitutional scholar who would say that doesn't trigger the establishment clause, I tend to think that it would. But telling people that they shouldn't protest is just as iggy as telling people they shouldn't build a mosque, and doubly so when it's a government official trying to make it a government issue.

Plus, to frame this as a GOP issue as that second cartoon does is disengenuous - a damn large portion of Democrats, including the Senate Majority leader, do not support the building of the mosque. I only mention that to point out that the cartoon is, well, not even close to nonsensical like the first one, but inaccurate and only successful in terms of confirmation bias.

That said, its much ado about nothing; all things being equal the mosque should be built. But I find the idea of the Speaker of the House threatening the Right to Assemble a lot more disgusting and horrifying than private citizens trying to prevent a mosque being built.

I don't get it. Is the cartoon saying that the people protesting the (a couple of blocks from) Ground Zero Mosque are the same kind of misguided rednecks that claim they've been abducted by aliens?