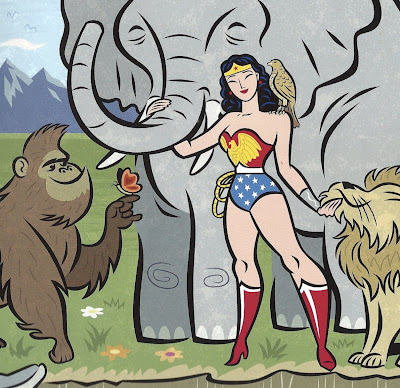 Remember last week, when I said I wouldn't be contributing to Blog@Newsarama.com anymore, but hoped to find a new home at a comics-focused site on the Internet for my online-writing-about-comics-that-I-don't-just-post-here?

Head on over to Robot 6 at ComicBookResources.com, and you'll find my first contribution, a piece about Ralph Cosentino's children's picture book (that is actually pretty much just a comic book in the format of a picture book), Wonder Woman: The Story of The Amazon Princess.

(The plan is contribute weekly-ish there, a much less demanding schedule which will hopefully allow for me to produce slightly longer and greatly improved pieces than those I was producing the last few weeks for Blog@, after the daily blogging schedule started to grind me down. )

I reread Cosentino's Wonder Woman book with Niece #1 (now aged 7), and we took turns reading it to each other, each of us doing a page turn a piece, and then alternating back and forth.

She's not really into superheroes at all—she has an irrational hatred of Batman, which I may have mentioned at some point before—but she seemed to like it okay, going back to reread it quietly by herself after we read it together, and she lingered on some of the pictures.

I guess it shouldn't really be surprising that a 7-year-old girl might be mildly interested in a character who is a princess that talks to and befriends animals and beats up monsters and bad guys. There were an awful lot of words that were brand new to her in it, though, and she stumbled over a lot of pronunciation, including the word "Inuit" and a lot of Greek names, like Hippolyta, Heracles, Aphrodite and Circe.

This was her first exposure to Greek mythology, as far as I know.

Cosentino's Wonder Woman book, like his previous superhero storybook, Superman: The Story of The Man of Steel, had a cameo in it specific to his own body of work. Let's take a look at them, shall we?

On this page/in this panel, Wonder Woman narrates that part of her mission is "to teach peace and respect to all," and she's pictured hanging out with four people: 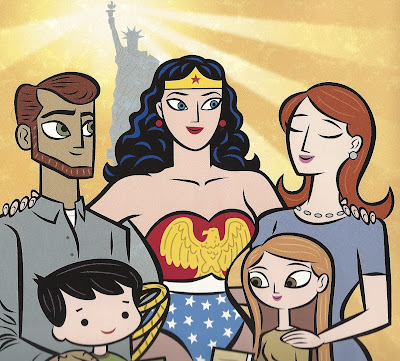 The little boy on the left looks slightly out of place, doesn't he? Perhaps because he has dots for eyes, unlike the other characters in the scene. Or perhaps because he's Cosentino's Fun-Boy, from his book The Marvelous Misadventures of Fun-Boy.

In Superman: The Story of The Man of Steel, there's a page/panel devoted to the "Look, up in the sky!" routine, and the crowd seems to be full of more-detailed-than-usual characters, which makes me wonder how many of them are supposed to be modeled after real people. I definitely recognized the characters on this lady's shirt: 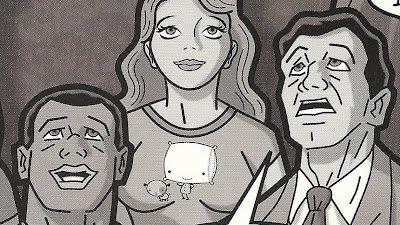 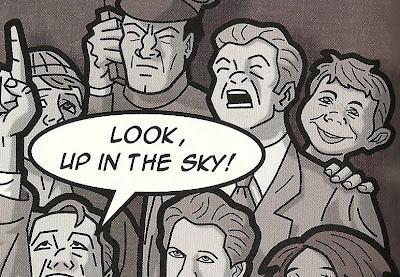 —who you may recognize from the cover of, like, every issue of Mad magazine ever.
Posted by Caleb at 7:36 PM

Welcome to Robot 6, Caleb. We're really happy to have you there.

Aki Alaraatikka said...
This comment has been removed by the author.
12:30 PM