Just three this week. If you're casting about for something new to try this week, you should totally check out Popeye #1 from IDW. It's a $4/22 page book, but it's 22 super-stuffed pages (the reading equivalent of, like, a whole story arc in Aquaman or New Avengers), and the paper and cover stock is neat. I'll have a review of it perusable tomorrow-ish.

Aquaman #8 (DC Comics) There's an awful lot of wasted space in this issue, which reads shorter than it actually is, thanks to the two-page spread of Aquaman and team posing and the practically-a-splash-page final page, which features a sliver of an establishing shot above a huge panel of the already-introduced last issue Black Manta essentially talking to the location caption. 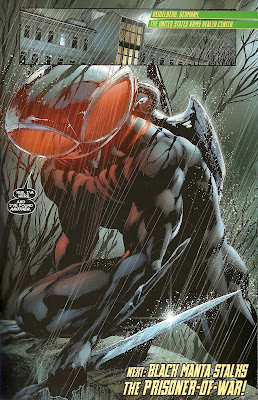 The time-frame captions get a little confusing, too. The book opens "Six Years Ago," when Aquaman was just an Aquateen, then transitions to "One Year Later", for a splash page (another one!) which shows Aquman with his trident and new pants, and then transitions to the present without a caption, and then it transitions transitions to "Six Years Ago," even though the character design (Aquateen has his Aquapants on) indicates the scene is set sometime after "One Year Later" than "Six Years Ago." (For greater irritation, try to match the timeline up with the "Five Years Ago" of Justice League, which is also by Johns and also features Aquaman, as the character looks completely different in the two books set during the same time).

It's easy enough to tell the past from the present based on the way penciler Ivan Reis draws and costumes Aquaman, but the captions only make one second-guess that.

I liked the lay-out of page four, with its tall, thin vertical panels, one of which is split up like a strip of film to show the adolescent Arthur diving from a cliff into the sea.

It's not that great, really, but aside from the decompressed and often unimaginative plotting, it's not bad either. I'm beginning to think maybe I should have made Batman or Flash my keep-a-foot-in-the-DCU book though...

So this is the first issue of the new direction for the title, in which the "Bucky" in the title becomes a blank space to be filled in with different guest-stars. For this story arc, by the new creative team—it's third since it launched, what, like a year ago?—Cap is joined by Clint "Hawkeye" Barton, who is now wearing the movie costume inspired by the Ultimate Hawkeye costume. Does that mean Hawkeye is now cosplaying an adaptation of an alternate universe version of himself...?

I mainly decided to keep this series on my pull-list an issue or two longer because I was curious about the work of Cullen Bunn, the new writer, and the solicits for this issue promised dinosaur-fighting.

It's...disappointing. Bunn's script seems written on auto-pilot, one generic scene following another, each predicted, pre-destined by the fact that this is what happens in superhero comics. The sole part I found inspired and a little amusing was how many panels there are of Cap and Clint exchanging meaningful glances in a 20-page comic. Nine altogether, two of them completely silent, just dudes looking at each other, talking with their eyes. 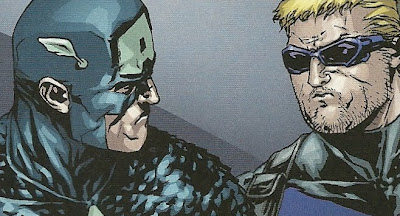 Either these are two long-time friends and co-workers who know one another so well they hardly need to talk to communicate, or they are totally doing it. 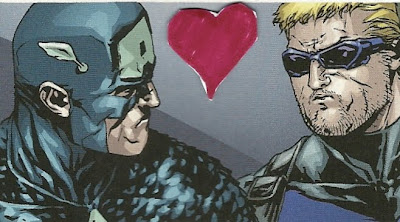 Artist Alessandro Vitti's art is okay, but colorist Javier Tartaglia's coloring is dark, murky and effects-heavy. Most of what's drawn seems to be Cap and Clint whispering to each other and/or fighting, but it's nothing special, and average art just doesn't cut it on comics stands as crowded with great work as ours are today.

The "dinosaurs" were...I don't know. They were bipedal, man-like and covered in Venom-y, Carnage-y tendrils or something. Not what I was hoping for, really.

So I think that's it for Captain America and Caleb, which makes Daredevil the last Marvel book on my pull-list, if anyone's keeping score (No one is keeping score). 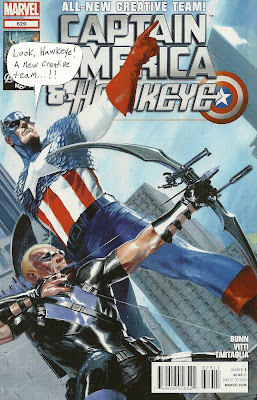 Say, look at the logo this month... 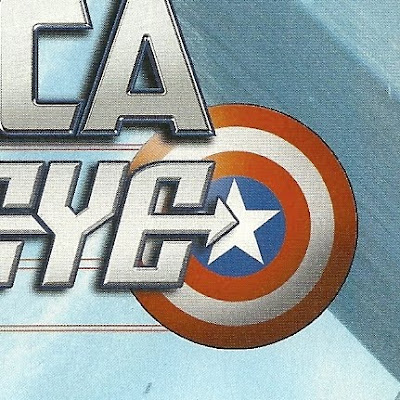 Is it just me, or...Ah, it's probably just me. Sometimes an arrow is just an arrow, right?


Daredevil #11 (Marvel) This is part three of the three-book "Omega Effect" crossover story (I think; it doesn't actually say "part three" or "continued from..." anywhere). Fortunately, Mark Waid writes it a lot like the last multi-book story arc to intrude into Daredevil; that is, it makes sense even if you missed the other parts.

Of course, part of that is down to the fact that there's not really a complicated plot. Dardevil, The Punisher, Spider-Man and Cole—the same lady who is in every comic book Greg Rucka writes, now hanging out in the pages of The Punisher—are fighting a bunch of Marvel Universe henchman over a Maguffin called "The Omega Drive," which is a super-CDROM with a Fantastic Four logo (in fact, it looks like it could be a DVD of the first FF movie. Cole attempts to betray the team. Daredevil talks to her. And then everyone goes their separate ways, their interpersonal conflicts left unresolved (i.e. The Punisher goes back to being a mass-murderer DD and Spidey never bust), and even the bit with the Omega Drive is the same as it was before this issue—or three issues, counting the other titles, I guess—began.

The art work, by Marco Checchetto, is pretty weak, and a big letdown after the artistic heights of the first six months of the book. That is, it's decent enough art work in a Steve McNiven-like style, with its visual, computer-aided shortcuts all there to see and shake your head at, but it's tonally quite different from what a Daredevil reader might come to expect (Unlike Martin and Rivera, for example, Checchetto veers away from abstraction and toward representation, and his work is more textured and 3D; just check out the seams and treads on the costumes, compared to costuming from previous artists.

Here, look at this: 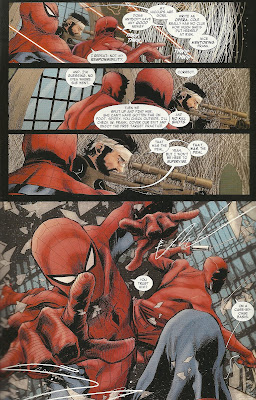 Yes, the Punisher (who apparently has a beard now) on this page is the same drawing used three different times, but, fun fact, that same drawing is also used on the previous, facing page.

A lot of the backgrounds are, well, look at this: 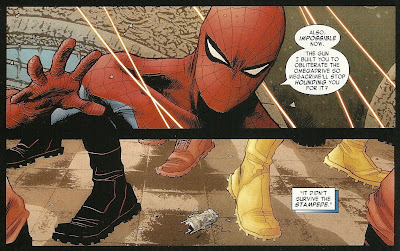 I'm sure I sound like a broken record to anyone who's read my blog for too long, but I hate art like this.

I would be dropping Daredevil after this issue if it were Checchetto who was drawing #12, which, thanks to Marvel's accelerated shipping, actually ships next week (?!), but the great Chris Samnee is on board for at least the next two issues, so I guess I'll stick around a little longer, but goddam Marvel makes it hard to read their comics.

Oh, and adding insult to injury, editor Steve Wacker runs a letter from Mike Allred in the letter column, in which the great Madman, X-Force/X-Statix and iZombie artist says "I would LOVE to do a guest spot if you'd be into my humble scratchings." This very letter appears in an issue which employs a sub-par guest-artist, which follows another issue which also employed a sub-par guest artist!

Wacker responds "OF COURSE YOU CAN DRAW SOME DAREDEVIL!" but then goes on to say he knows Allred is busy, but hopes he can at least fit a cover into his schedule, and that he'll ask Daredevil readers what they think.

Tom Spurgeon made an effort to do something like this in March, and Tom Bondurant did it at the bottom of his "Grumpy Old Fan" columns at Robot 6 that same month. It seemed to difficult to me to incorporate into all of my writing about comics on first-point of reference, but I thought I'd give it a shot down here for reviews and suchlike. It's about a month since the Toms were doing it, but I've been thinking a lot about who gets credit, the business men are the creators, a lot this week, for obvious reasons. So!

>even the bit with the Omega Drive is the same as it was before this issue—or three issues, counting the other titles, I guess—began.
This really felt like a cop-out for me. The whole story Omega effect story felt forced and unnecessary, but to have it finished so indecisively reveals the whole thing for a cheap crossover that it is.