A quick question for any Catwoman scholars in the reading audience

See this lady in the skintight catsuit? 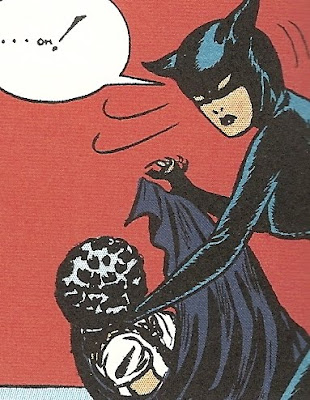 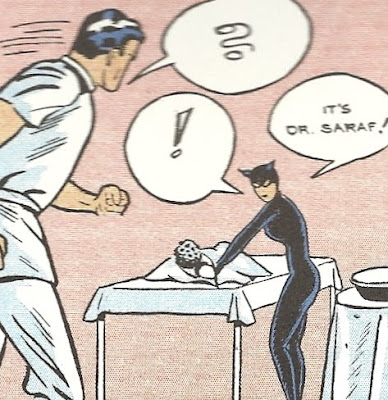 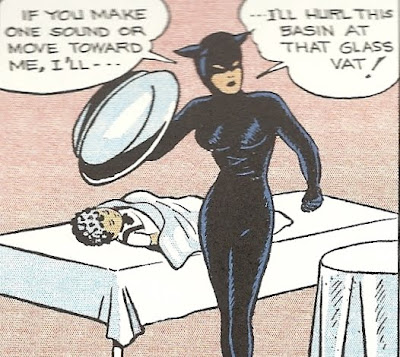 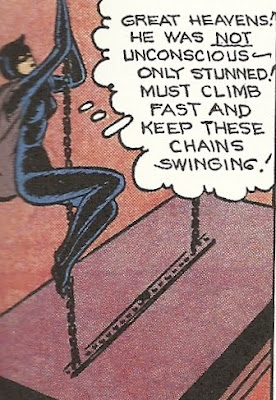 No, she's Tarpé Mills' Miss Fury, from the Golden Age comic strip of the same name.

Those partial panels are all from Sunday strips form the mid-to-late-40s, and were all scanned from the Trina Robbins-edited Miss Fury: Sensational Sundays 1944-1949 (IDW;2011), which I just started reading.

Miss Fury is really the heiress Marla Drake, who disguised herself using a panther skin her African explorer uncle gave her. Though not in the images above, the panther skin costume sometimes includes a tail, as you can see in this comic book cover from 1942: 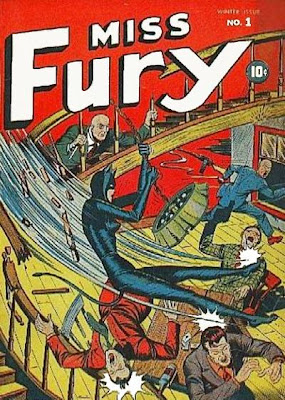 Batman's villainess Selina "Catwoman" Kyle appeared a year earlier in 1940's Batman #1, but at the time she was an un-costumed jewel thief called simply "The Cat."

When she first donned a costume, it was merely a furry cat's head mask topping off a dress. 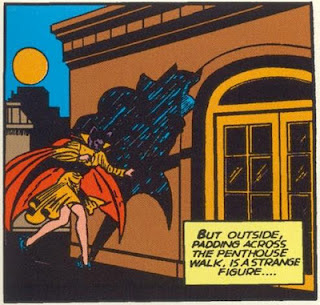 My question is, when did Catwoman first start wearing a Miss Fury-like cat-suit?

As far as I can tell from the comics I've read, she didn't start dressing similarly to Miss Fury—in a dark, skintight catsuit with a cowl and ears—until 1987's Batman story arc "Batman: Year One" 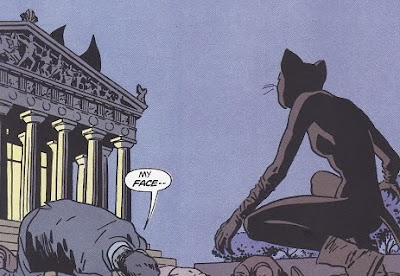 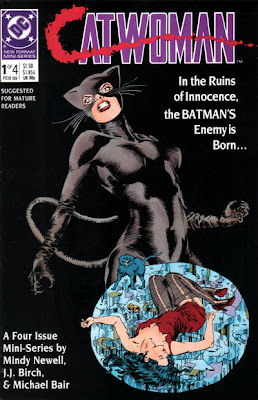 She kept that suit until about 1992-1993, when she got a new, purple costume with thigh-high boots and a hole in the back of the cowl to allow her regrown, long hair to flow behind her.

The 1992 film Batman Returns outfitted her in a black, Fury-esque catsuit, albeit one with very visible white stitching zigzagging it.

When Batman: The Animated Series began, its Catwoman started in a gray costume similar to a more highly accessorized version of the late-80s, early-90s costume. When the characters were all redesigned for the show's 1997 fourth season, however, in which the was retitled The New Batman Adventures, the animated Catwoman resembled Fury exactly: 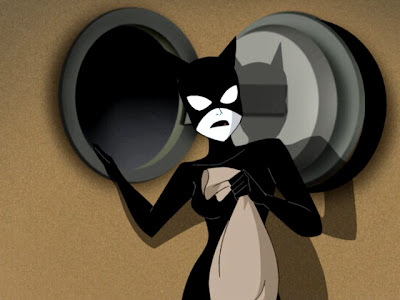 In retrospect, it's fairly obvious that Miss Fury had a strong influence on Catwoman as the more popular character evolved, eventually quite heavily influencing her design.

I'm curious as to when exactly Catwoman started dressing...Fury-esque, I guess.

As far as I can tell, it didn't seem like she ditched the purple dress with green cape ensemble for an actual cat-suit until the late-80s, but then, the Bronze Age of Bat-comics is pretty much a black hole to me. Can anyone date a skintight Catwoman costume with a cowl to any earlier than the "Batman: Year One" story arc...?
Posted by Caleb at 7:56 PM

Yeah outside of the live-action 60s tv series, no cowl. There was a green version of the Julie Newmar costume, with a mask (not a full head mask --designed by Infantino?), followed by the go-go era (late 60s-early70s), followed by a return to the classic full dress costume which she wore right through the 80s until David Mazzuchelli/Frank Miller returned to the 60s tv-style catsuit in Year 1.

I ent looking for, and found, this page from the big tabloid "Secret Origins of the Super-Villains" I had as a kid. No Emma Peel outfit with cowl there.

Here is a more complete overview.

"Trademark design" is connected to distinctive features. A "cat suit" per se was never distinctive. However, when you add up ears, mask, and cat suit, then you have Miss Fury. How Tarpe Mills or Bob Kane drew Miss Fury/Catwoman reflects the deco stylings of the time, but add in ears, suit, mask and style and you have a distinctive trademark (now public domain, unlike Catwoman).

The key point is the ears and the cut of the mask. Cat suits were extremely common in Deco days. Even Karloff in the Black Cat. Its the ears and the mask that are most distinctive.
Here is Bob Kane doing the Catwoman I think others here might have missed:
http://1.bp.blogspot.com/_2kjisMm3M9Y/TKtfYM-nEoI/AAAAAAAANl4/8nZSQp-FVIU/s400/bob-kane-catwoman-batman-painting.jpg

Someone mentioned secret orgins of the super villains - yes, I had that as a kid, that's the one I am talking about. However, you need to skip the 70s cover and "modern" illustrations and look at the Bob Kane story in the collection to get what I am talking about.

After Catwoman ditched the animal head masks she wore in her first appearances (1941-44), Kane switched out the realistic cat head full head mask for one that clearly came right off Marla Drake's head (Black Fury!!!). Purple in printing then was a frequent sub for black. Miss Fury's cape was green, tho she rarely wore it outside of the covers. Kane kept Catwoman's dress.

As an artist who does lots of design I can't help but get the impression that Kane lifted many elements from Miss Fury, but also changed many things here and there to cover it up and not get into legal trouble. It was also a small community in NYC toon publishing.

Tarpe Mills was a big time newspaper sunday strip with circulation bigger than comic books at the time, and comics were selling in the millions. But long story short, Kane lifted the mask, dickered with the ears and let the hair hang, kept the skirt and worte a pretty forthright woman. DC later consolidated corporate dominance in the industry for over 70 years, and now everyone knows Catwoman, Not Miss Fury.

People don't look at Miss Fury and say "Oh! It's Catwoman!" because of the cat suit. Its the ears and her mask, (plus) the catsuit. Kim Basinger's outfit is basically Miss Fury, but more Catwoman small touches on the mask, and also brand new distinctive touches (all the seams).

Catwoman is © but Miss Fury is public domain, meaning i should be able to do a Miss Fury strip for free, but expect legal hassle from DC. See how that works?

Hope that helps with your question!

When people see Miss Fury, its not the cat suit that makes them say "Hey, that's cat woman!" its the ears and the mask on Miss Fury that make them say that.
Now look at Miss Fury and look at this:
http://www.batman-online.com/features/1338247178_kane-cowl.jpg
That picture really hammers the point home. Bob Kane switched to this outfit (half mask with dress and cape) after using the same outfit with a realistic, full head, animal mask. The purple dress look stayed for over 8-15 years.

As an artist I have studied this stuff, especially from a design viewpoint, ever since I had Secret Origins of the Super Villains, and I loved that Catwoman through the ages page, linked to by someone earlier. However, that is not a complete list, and you have to look past 70s stylings to see what I am talking about (Catwoman and Miss Fury were creatures of Deco). I'm sure many people had worn cat masks like that for decades before either Miss Fury or Catwoman.

However, because DC has grown to be giant corporate entity that has dominated for over 60 years, Catwoman remains, and now DC artists get to rip off Fury without worrying much, unlike Bob Kane's careful first design of Catwoman (Miss Fury was actually bigger then, as it ran in Sunday Strips in newspapers with giant circulation). Miss Fury is now Public Domain, so when I do a Tarpe Mills tribute strip (Miss Fury, in Mills distinctive style), I can do it for free, and then wait for DC to bring me legal hassle. See how that works?

Very similar. very generic. I love them both, but lets face it, that costume is 99% silhouette. Artistically, there are certain ideas that can't be owned. This is one such idea.