One thing I may never stop finding funny...? 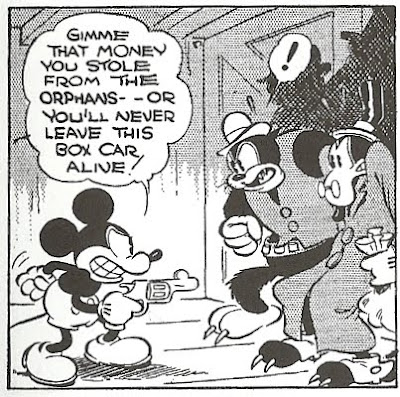 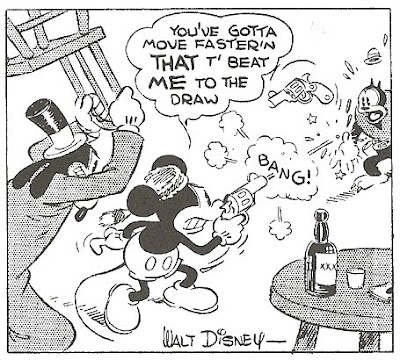 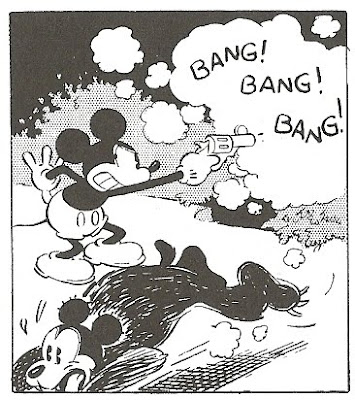 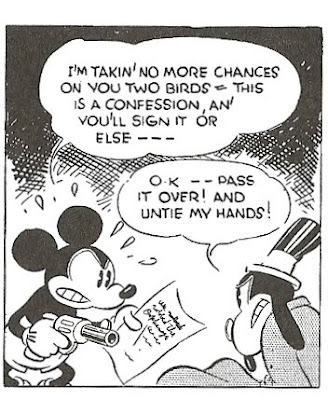 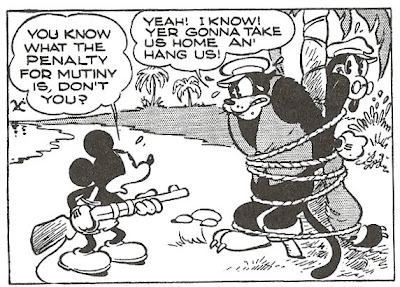 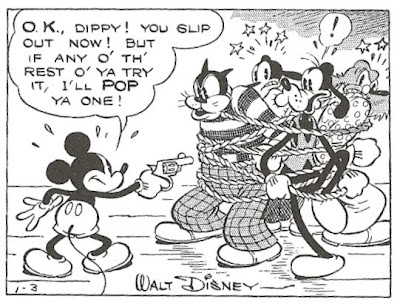 The sight of gun-toting Mickey Mouse.

All of the above panels are from Fantagraphics' Walt Disney's Mickey Mouse Vol. 2: Trapped on Treasure Island, part of their series collecting Floyd Gottfredson's excellent run on the Mickey newspaper comic strip.

Now our friend Mickey Mouse mostly just threatens his opponents with gun violence. I've yet to see him actually shoot someone, let alone kill them (shooting the gun out of Peg-Leg Pete's hand in one of the above panels is as close as I've seen him come), and his weapon of choice is usually his fists.

But this action hero version of Mickey is so far removed from the bland, safe, corporate mascot he has been throughout my entire life that seeing him packing heat seems so alien to me that it's amusingly absurd, along the lines, of, I don't know, seeing Fred Flintstone and Barney Rubble smoking cigarettes or Superman beheading a foe.

Those are the middle two panels of a four-panel strip. For context, Mickey's training a racehorse, and when he first fired a starting pistol—which I guess were real pistols in the 40s?—the horse ran away, frightened by the noise, so Mickey's trying to teach him not to be afraid of the sound of a gunshot.

Whatever the reason though, it's awfully hard to imagine the guy who was trying to teach my cousin how to count last week is the same one saying "Guns can't hurt ya!" and "Pluto likes guns!"
Posted by Caleb at 7:32 PM

Fun fact: Fantagraphics designer Jacob Covey mocked up a cover for Vol. 3 of the Gottfredson series with gun-totin' Mickey but it never made it to the actual approval stage. The final cover has Mickey in chains instead.

In my country Mickey-stories are mostly action filled. I should be glad about that, and after knowing what it`s like there in America with Mickey, I guess I will be.

Disney proved as far back as far back as Fantasia that Mickey can handle a serious storyline but other than a few video games and one -kinda weird- pre-movie cartoon in the 90's he hasn't been utilized much in the genre.