All Star Section Eight #1 (DC Comics) Garth Ennis and John McCrea's Section Eight series seems to have picked up an adjective in "All Star," which should really have a hyphen in it, shouldn't it? The prologue that was featured in Convergence: Harley Quinn #2 just called it Section Eight, so now I'm curious about the addition of the "All Star," which is featured not only on the cover, but also in the solicitations on dccomics.com and in the fine print of this issue. Is that meant to differentiate it from Hitman continuity, I wonder...? In the same way that All-Star Batman and Robin, The Boy Wonder and All-Star Superman were understood to be par to be part of a discreet All-Star line, rather than part of the main-line DCU continuity? (Or wait, if that was the intention, than this logo would need to be all tilty in order to match that of Chip Kidd's design for the previous two All Star books, wouldn't it...? Hmmm...)

If that was the thinking, it hardly mattered. There are relatively few characters from Hitman that survived the book's last issue, and they are the only ones to appear here: Sixpack, Bueno Excellente, Baytor and Hacken, who I was honestly quit surprised to see (The one-time comedy relief character among Tommy Monaghan's gang of drinking buddies/hired killers, Hacken is now straight man...as he'd almost have to be in a cast that consists of Sixpack, Baytor and Dogwelder II).

Because this is told through the eyes of Sixpack, a character who is basically the most unreliable narrator in comics history, no real great pains needed to have been taken to differentiate this story, which is maybe kinda sorta set in a different continuity-verse than Hitman was; it appears to be an entire issue set within the alcohol-addled mind of Sixpack, who was always going on about his adventures that were more often than not just drunken delusions. Now instead of hearing Sixpack say these things, as Tommy and the others did, we're on the inside, with Sixpack, experiencing them.

After a four-page sequence introducing Section Eight, shown coming to the rescue of the badly-wounded Superman, Batman and Wonder Woman (all wearing what appear to be the costumes they would have been wearing near the end of Hitman...not so sure about Wondy's bracelets though), fighting on against a horde of robots that have already killed the hell out of Dr. Fate, Plastic Man, Blue Beetle Jaime Reyes, Captain Marvel, The Flash and Green Lantern Kyle Rayner (I love the way McCrea draws the gigantic, claw wounds and big bite-marks taken out of the characters, alive and dead), and then a four-page sequence where Sixpack inadvertently becomes his "old" self again, the story begins in earnest.

Sixpack has to put the team back together, but given the fact that there are only two members of Section Eight left alive, he's going to need to do some major recruiting. He does, but still finds himself one hero short: And then he looks out the window of Noonan's Sleazy Bar and happens to see Batman at an ATM machine.

He fails to get the Dark Knight to sign up, but he does witness a very unusual interaction between the vigilante and Gotham City law enforcement, and McCrea draws the a series of tributes to Neal Adams, Kelley Jones and Jim Aparo, that are surprisingly perfect.

I was (obviously) pretty excited about this book from the start, but man, when I hit the panel where John McCrea was drawing an homage to Kelley Jones in a panel with Norm Breyfogle like excitement lines around the top in a book that is a spin-off of Hitman...? That is a lot of my favorite things about comics in a single panel.

I'll likely have a bit more about this elsewhere later but, for the time being, I should at least note that this was not at all disappointing, and I was a little skeptical regarding whether or not it would live up to my expectations, what with people always saying you can't go home again. Ennis and McCrea seemed to have managed it just fine...or, if they're not home-home, they're in the same neighborhood, maybe a few doors down.

This is easily the strongest of the three out-and-out comedy series DC launched post-Convergence–that is, Bat-Mite, Bizarro and Section Eight–although I do find myself wondering how this might read to someone who has never read Hitman. I assume many of the jokes will still land just fine; the Batman bits are all funny, whatever one might think of Sixpack, who is a character-type that used to be pretty prevalent in American pop culture, but has all but disappeared over the course of the last few decades, as the "town drunk" character type was retired given better understanding of alcoholism as a disease.

I do not care for the Amanda Conner cover one bit, though. She's a great artist, and she tries to make the cover ugly–note the pile of poop on the cover–but man, her Sixpack is just too smooth, too cute.

Gotham Academy #7 (DC) Some books are going to end up being rather hurt by the two months vacation DC's line took for Convergence, and this one may be hurt the worst. And that's in spite of the strong push DC has been giving the book, grouping it together with Batgirl and Grayson as fresh, new takes on Gotham City super-detective comics.

The creative team had just wrapped up their first story arc, and had a somewhat grafted-on feeling back-up teasing what seemed to be the next arc–in which Academy alum Bruce Wayne signs Damian up to attend school there–and then nothing for two months.

The book returns with a fill-in artists (Mingue Helen Chen), a somewhat messy (in terms of both art and story construction) done-in-one story starring a guest-star and a supporting character and seems to end it's "new direction" by page 20; the "new direction" teased seems to come to an end when Damian is expelled on the last page, and a last-panel banner reading "Next Month: Olive Returns!"

Most of the ongoing books that are still going on post-Convergence have involved rather radical new status quos: Think James Gordon replacing the presumed dead Batman in a robo-Batman bionic rabbit suit, or Superman having lost his powers and his secret identity, or Hal Jordan having stopped getting haircuts and gone on the run from the Green Lantern Corps. This new direction, Damian joining the cast, lasted just one issue? In effect, then, Gotham Academy seems to have taken a third month off, not publishing new issues in April or May, and then a fill-in issue for June.

Maps is our star, and she finds a magical quill pen that seems to be able to control the thoughts and actions of others, including getting her and Damian's hands stuck together for the course of the issue. There's a porrly laid-out scene on pages two and three that I had to read and re-read and re-read to try and make sense of it, and eventually just steamed ahead, with the dialogue explaining it later. The problem? All of the characters in the scene look alike: Damian, Eric and even Maps. Theye all share teh same basic short, black hair look and dark blazers over dark shirts costuming.

Damian's inadvertent quoting of Batman '89 in one scene, and Maps' general enthusiasm for this totally hardcore new student who happens to have both a grappling gun and a batarang on his person are pretty charming, but it doesn't change the fact that this was overall a very weak issue of a series that really needed to come back form vacation as strong or stronger than ever.

Injection #2 (Image Comics) I thought the first issue was an awfully strong start, and this being a relatively light month, I figured I'd read #2 as well. I don't think I'll be buying #3 off the rack, though. There's some great art from Declan Shalvey, as is to be expected, and there's a nice, brutal fight scene set in a kitchen, but writer Warren Ellis seems to have backed off of the big, cliffhanger reveal at the end of the last issue, and so the story doesn't progress in an obvious way, but goes for a bit of a walk in a different direction. That's fine and all, but it's fine and all for a graphic novel, not a serially-published comic book. I suppose I'll trade-wait this one after all, then.

Saga #29 (Image) Last month's issue ended with a surprise death of a supporting character, so surely the cast of this issue should be safe, right? Wrong! There is a very sudden, very shocking, very final-looking death in this issue, and another less final looking death. Plus some of those terrorists on the cover get killed to. Basically, there's a whole lot of dying all over this issue, and that last page almost broke my heart.

The two-page splash on pages six and seven is something I've never seen anywhere, never even imagined I would see anywhere, so, um, kudos to Brian K. Vaughan and Fiona Staples for being so...creative? Let's go with creative?

Also, I find it hilarious that the person who draw that is also drawing Archie comics now.

Also also, while it was certainly an extremely unexpected scene, it certainly makes the object of our heroes' quest easier. If the subject of that splash wasn't doing what it was doing, if it couldn't do that, then yeesh, imagine the difficulty they would have in trying to get what they needed... 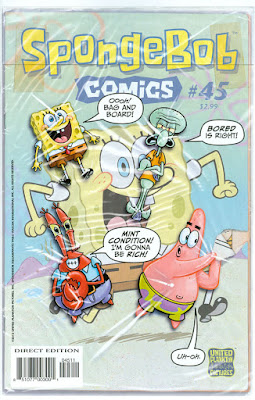 SpongeBob Comics #45 (United Plankton Pictures) Once again, SpongeBob has one of the best covers of the week.

Uncle Scrooge #3/#407 (IDW) Hmmm...I didn't care much for this issue, making it an all-around rather disappointing Wednesday evening for me (Thank God for Section Eight!). The bulk of this issue is a 32-page story by Romano Scarpa and Rodolfo Ciminio in which Scrooge laments the lack of thriftiness in modern society (although it appears to be the pre-war years here; hell, there's a kid playing with a stick and a hoop in the first panel!). He finds a back that, in an effort to promote thriftiness, has given away $100 to three individuals, with the promise of giving them another $100 if they can manage to save or increase that $100 in 24-hours.

As it turns out, all three individuals are known to Scrooge: His nephew Donald, his sometimes rival Jubal Pomp and a Beagle Boy. It's a pretty complicated set-up for a series of criss-crossing gags, but I didn't find many of them particularly funny. Then again, my favorite Scrooge stories of any length tend to be the ones involving exotic travel and adventures, so perhaps it's not the comic, it's me.

There's also a two-page gag strip by Tony Strobl involving a parrot, which was perhaps a particularly unfortunate subject matter for an Duck story, as the latest volume in Fantagraphics' absolutely essential Carl Barks Library was Donald Duck: The Pixilated Parrot, and so I had just read a pretty great comic by one of the greatest comics creators of all time featuring Scrooge, DOnald, the nephews and a parrot.
Posted by Caleb at 8:08 PM