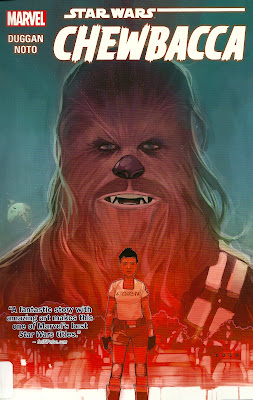 Everyone loves Chewbacca, but you wouldn't know it from how rarely the big fuzzball gets to take a star turn in comic book series. Dark Horse held the license to produce comics based on Star Wars for about 20 years, and a quick glance at comics.org reveals only two books with "Chewbacca" in the title, a four-issue 2000 series entitled Star Wars: Chewbacca and a 2011 original graphic novel Star Wars Adventures: Chewbacca and the Slavers of the Shadowlands.

The reason Chewie doesn't make such a great comic book star is the same as one of the reasons we love him as a film star so much: He can't talk English (or "Basic" or whatever), but communicates solely via high-pitched howls that only Han Solo and C-3PO seem to understand all that well.

This, naturally, makes him a difficult character to start in a comic book, as the writer would either have to translate his wookie calls via sub-title (which would suck all the mystery and charm out of the character), or he would have to remain a more or less mute character, with any comic book adventure that pivots around him necessarily being something of a silent affair, with a very gifted artist needed to try and convey Chewbacca's thoughts and feelings through action and subtle shifts in body language.

The latter could be done, of course, but it's not done here, in Marvel's first miniseries to feature Chewbacca as the title character. Rather, writer Gerry Duggan just swipes out Han Solo and Chewbacca's more familiar human allies for a new one, who can function as our point of view character and do most of the talking for Chewie.

That new character is Zarro, a little girl who finds herself enslaved, along with her father and many of their neighbors, by a local gangster who puts those who can't repay his loans to work in his mine. She briefly escapes, and happens upon Chewbacca, who has recently crash-landed his ship in a field near town. Chewbacca's inherent heroic nature leads him to protect her a few times, and while he is quite insistent on his need to leave the planet and get back to his important business–which he communicates by pointing at himself, and then at the sky and shouting "HRRAR!", she eventually prevails upon him to help when she tells him that she and her community are being enslaved (a sore spot for Chewbacca and wookies in general, as the wordless flashbacks reveal).

And so Chewbacca and Zarro endeavor to free the slaves, defeat the gangster and even get to strike a blow against the Empire, as it turns out that the gangster is trying to set up a deal to supply the Empire with the raw materials he was mining.

Duggan's script presents a nicely small-scaled, even relatively intimate conflict–one that even recalls the sort of Western that so inspired young George Lucas–with Chewie in the role of the taciturn stranger who rides into town and ends up finding a problem that only he can solve, mostly through righteous violence.

Chatterbox Zarro, who can't understand Chewbacca any better than we can, is a great partner and foil for him, goading him into helping her while occasionally making fun of his piloting skills. Duggan gives us an uncharacteristically funny Star Wars story, and manages to do so without really violating the spirit or tone of the source material; instead, it's quite organic, and much of the comedy originates from the simple character and culture clashes that are involved in having a wookie wandering around in a place unfamiliar to him and his kind.

Duggan also riffs repeatedly on that one moment in Star Wars where the droids play holo-chess with Chewie, mentioning more than once that there are various sayings about wookies, and addresses an enduring mystery about the conclusion of the original Star Wars film: Why did Han and Luke get medals, but Chewbacca didn't? 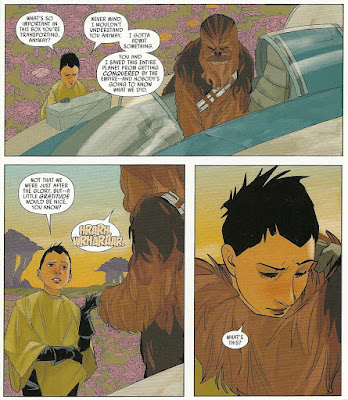 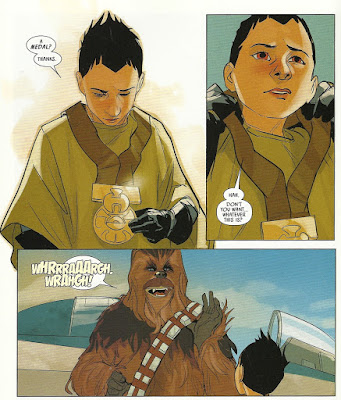 No, he totally got a medal! He just didn't want to wear some stupid medal. That means Chewbacca is, unquestionably, the coolest member of the cast of the original Star Wars.

Phil Noto's artwork is pretty incredible, as he's developed and perfected a style that makes him perfectly suited for drawing "real" characters like Chewbacca in perfectly realistic fashion, while seamlessly blending them into a world and cast without any sort of visual cast. There are plenty of artists who could draw great Chewbacca comics, but I'm hard-pressed to think of an artist who could draw a Chewbacca that so closely resembles the film's Chewbacca and fit him so naturally into a comic like this.

It occurs to me after pounding out those few paragraphs that, perhaps a better review would have been to just show you these panels, as it encapsulates pretty much everything great about Star Wars: Chewbacca: 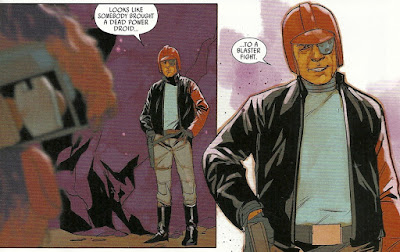 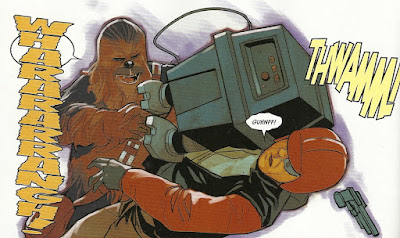 Yes. Did you like those panels? Then you'll like this graphic novel. Go read it already.
Posted by Caleb at 7:40 PM

It is nice art, but...I'm so sorry, but in one shot of Chewbacca, he looks like a hairy Homer Simpson to me.