Recently Batman writer Grant Morrison was joined by artist J.H. Williams III for a three-part arc spanning Batman #667-669. Williams was kinda sorta filling in for the title’s alleged “regular” artist Andy Kubert, who apparently can’t do more than a handful of issues per year, and the story itself was something of a departure for Morrison, who, in the course of the previous year, had been focused on telling a story about Batman’s son.

Despite the tangential nature of the storyline, it turned out to be the best story of Morrison’s stint on the title. Not simply because he finally had an artist who could visually match his constant allusions to comics past.

Mostly because it guest-starred this guy:


That’s Great Eagle, also known as Dr. John Eagle, who, when he’s wearing the headdress and and Bat-shirt, answers to the name Chief Man-of-the-Bats.

As you’d expect a guy who dresses like that and goes around calling himself "Chief Man-of-the-Bats," Eagle is a talented, confident, tough guy who doesn’t much care what you think of his costume or codename.

Here he is about to perform emergency surgery on fellow hero and Batman admirer The Knight, who has a small barbed time bomb in his stomach… 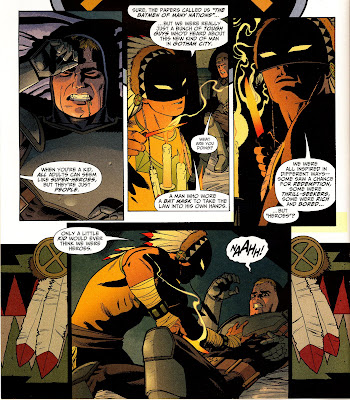 When another fellow hero and Batman admirer The Musketeer walks in and sees him standing over The Knight with a bloody knife, Eagle must pause to punch out The Musketeer, and then he immediately gets back to work…

Finally successful, he’s calm, cool and collected while surveying the results. The bomb goes off in the next panel, but naturally he, his patient and The Musketeer all escape the blast unscathed. As this page proves, he’s very Batman-like in his competence and demeanor, as well as his fashion taste.

And later, when his son and sidekick Red Raven (formerly Little Raven) is caught in a complicated deathtrap designed to kill him, Robin and the Knight’s sidekick The Squire, the chief wades in and grabs weights meant to torture two people, one in each hand…

But he’s not perfect, he has his weaknesses, like any man. For example, he can’t help but live up to the negative Native American stereotypes:


He makes up for it by being an inveterate litterer, though.

Anyway, if you’re anything like me (and the fact that not only are you reading my blog, but have got this far into a post, is indicative that you are), then you think Chief Man-of-Bats totally rules, and would like nothing more to read more Chief Man-of-Bats comics; hell, maybe even a Club of Heroes ongoing series (It’s not like it could be any worse than Superman/Batman or Batman and the Outsiders).

Well, until that glorious day comes, we can only look backward for more Man-of-the-Bats action, and the place to start is his first appearance.

Batman and Robin first met the chief and his sidekick in 1954’s Batman #86, by France Herron and Sheldon “Not Actually Bob Kane” Moldoff, in a story called “Batman—Indian Chief!”


Now, you may think, “Batman—Indian Chief?” Why would Batman be an Indian Chief? That’s kind of weird, isn’t it?

Well, back in the 20th century, there was actually a great shortage of Indian chiefs in America, and Indians, who all lived lives exactly like the Indians you see in old Westerns, were bereft of leadership.

To help fill the void, America’s superheroes came to the rescue. In addition to Batman, other do-gooders who donned headdresses to become Indian Chiefs included


and Rex the Wonder Dog. Of course, Rex was only an honorary Indian chief. Because making a dog, even one as wonderful as Rex, an actual Indian chief? That’s just silly.

Anyway, Batman and Robin are flying the Batplane back home one day, when they see a strange sight…


Robin peers through the binoculars only to see a boy that looks exactly like him, dressed exactly like him (save for a headband with two feathers on his head) riding a horse.

Curious, they decide to investigate, and within just two panels find a cave with a canoe decorated with a bat-symbol parked right outside it, and they stroll right in.

Batman's reaction to seeing a Native American version of himself in a cave mirrors my own reaction:

Great Eagle tells Batman and Robin of his origin, and his current predicatment: 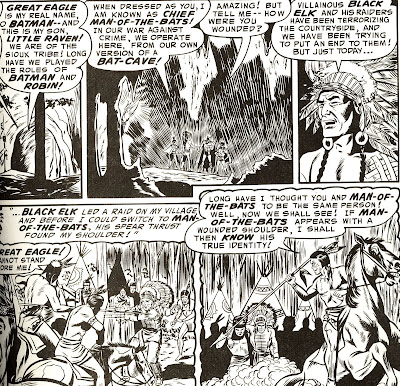 It should be noted that this Black Elk is not, in fact, the famous Sioux holy man of Black Elk Speaks fame, but a local villain who robs people at arrow point.

Since Eagle can’t go after him as Man-of-the-Bats without risking his secret identity, Batman decides to stand in for him, wearing some make-up on his lantern jaw to appear to be a Native American (I was relieved at this point to be reading a black and white copy, so I couldn’t see how red that make up was).

Now why Batman takes a disguised Robin with him instead of Little Raven, who would be far better-suited to prompt Batman to act like his dad, I don’t know.

Finding Black Elk seems easy enough, as the villain and his men shoot out the tires of an armored truck with their arrows and proceed to rob it, at which point our disguised heroes swoop in: 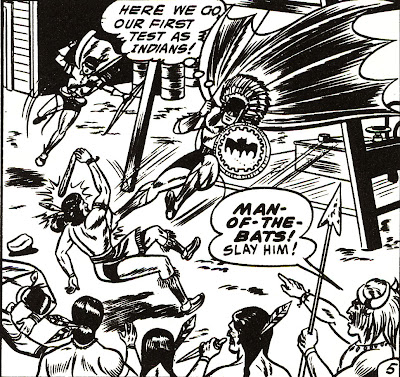 But the bad guys make their escape when a fire in the burning armored car spreads. Now Batman and Robin must track them. Robin keeps trying to get Batman to go after them in the Batplane, but the Dark Knight resists, pointing out that “We’ve got to handle this like Indians!.”

And in the 1954, what respectable Native American would ever board a giant, metal eagle that the White Man called "an airplane," which was probably powered by black magic.

Eventually, Batman picks up their trail, which heads back to an old mine. This the same group that Batman and Robin were totally whipping when last they met, despite being badly outnumbered, but now the caped crusaders find themselves geting the worst of it. They take shelter in a building, and are pinned down by Black Elk's bowmen. 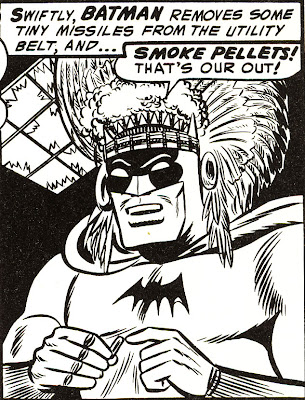 Smoke signals, of course! These naturally bring Great Eagle and his allies… 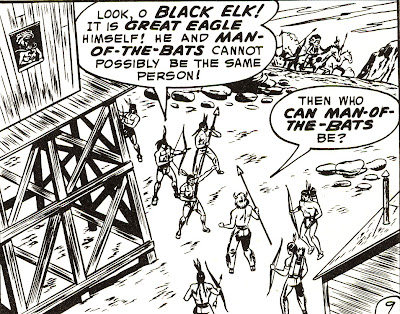 With the tables now effectively turned, Black Elk and his mob are quickly defeated. And thus the day, and Great Eagle’s secret identity, are saved, thanks to Batman and Robin.

Ah, those sure were simpler times, weren't they? Back then, Batman was always happy to run into a fellow crime-buster doing good works in his name. Nowadays, he totally would have sued the hell out of Great Eagle for copyright infringement. Not that he needed the money, of course, but just the principle of the thing, you know?
Posted by Caleb at 4:24 PM