I enjoyed Mark Waid and Alex Ross' series Kingdom Come immensely when it was originally released, and it's a pretty rewarding book to re-read every now and then, as each time reveals additional Easter eggs and metaphorical elbows to the ribs regarding obscure bits of DC history.

I know a lot of people have kind of fallen out of love with it over the years, or never really thought it was all it was cracked up to be in the first place, but setting the story itself aside for a moment, at the very least, it was a character design tour de force. Ross did an all-around incredible job costuming his players, and in many cases his versions of decades-old DC heroes looked much better than any previous versions (His Dr. Mid-Nite, Hourman, Starman, Red Tornado I and Dr. Fate in particular).

Ross' version of the DCU was enormously influential, and it seemed like there was a period in which the DCU was consciously adopting elements of it in an almost systematic way (Roy Harper adopted a costume closer to his Kingdom Come one, Cyborg went all liquid gold-skinned, Nuklon changed his name and started dressing more Atom-esque, etc.).

After the Infinite Crisis/52 continuity rejiggering, the Kingdom Come continuity seemed to have been merged with the new DCU. We got a were-cat version of Wildcat, a girl who looked like Red Tornado II and the Kingdom Come Starman in the JSA. A Batman/Talia kid popped up, as did a new Zatara and Plastic Man's son Offspring (From The Kingdom, not Kingdom Come, but close enough). There was a new, female Judomaster in Birds of Prey. Oh, and a bunch of super-Nazis seen in the pages of KC rampaged through the early issues of the relaunched JSoA

Geoff Johns, who wrote the rejiggering, seems to finally be getting around to explaining that with this past week's issue of JSoA, the first chapter of a story entitled "Thy Kingdom Come," which is co-plotted by and featuring some art by Ross. Now we've got Kingdom Come Superman on the main DCU Earth, and, from the looks of upcoming covers and solicits, more Kingdom Come-ers are yet to come throughout this story arc. (At the very least, we can expect to see the KC Thunder, no relation to the Thunder Judd Winick invented in Outsiders).

But there's only one character from Kingdom Come I really want to see much more of at this point, however, and that's this guy, about to impale Whiz Kid: 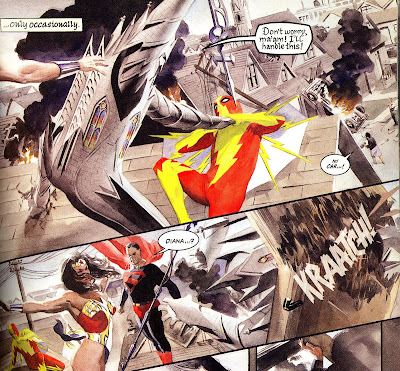 I think that's his only appearance (I'd have to go through again with a magnifying glasses in the crowd scenes to be sure), but I've always been intrigued by that guy who looks to be a super-strong, humanoid church who talks in a peculiar font of his own.

According to the key in the collected trade version of the series, his name is "The Cathedral," and he's "a holy terror to the underworld." And that's literally all I know about him.

Well, that, and that I'd love to learn more about him.

Here's a headshot, pulled from the key in the back: 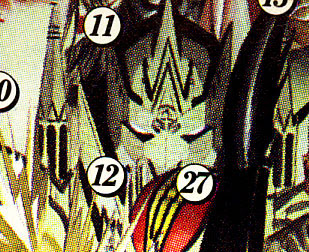 Man, I hope he makes an appearance in "Thy Kingdom Come."
Posted by Caleb at 8:37 AM

Yeah! I just re-read that book, and seriously! That character looks dope! Or at least, totally nuts!

I do remember that guy, he looks hella cool. Also, I don't know if I ever noticed that he was supposed to be one of the "good" guys who was overzealous.

If you listen to the Audio book, he actually gets some lines and a brief recap of his backstory.