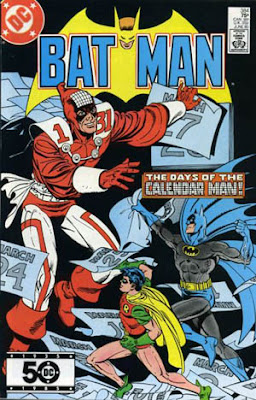 I know Loeb is reviled to all hell, but I love what he did for Calendar Man in the Long Halloween.

That villain has got to be the lamest ever in terms of costume, concept, and powers.

I had seen Calendar Man locked up in Arkham in some Jeph Loeb comics but I never, ever wondered what his costume must have looked like.

I'm kinda angry that Jeph Loeb remembered this guy and brought him back. This wasn't a Dan Slott "I remember a lame character with one appearance and now I will make them awesome" revisioning. This is Jeph Loeb finding his own level in a character and bringing back asomeone as lame as he is, to make him less garish but equally lame.

I think he's slightly cooler than Signal Man, although I realize that's not saying much.

Someone--Chuck Dixon and a group of artists--tried to make Calendar Man more deadly and serious, updating his costume and all, in Batman 80-Page Giant #3. It worked about as well as all attempts to make goofy old villians deadly and serious. I don't think he's been seen since.

75 cent cover price, DC 50th anniversary blurb - this comic came out post-Dark Knight and around the time of late 80s Bat-Mania? How awful.

"This is Jeph Loeb finding his own level in a character and bringing back asomeone as lame as he is, to make him less garish but equally lame."

Oh wow, I had that comic when I was a kid.
Fun.