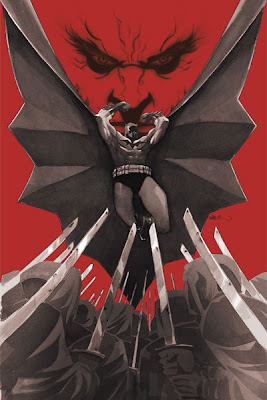 Detective Comics (DC Comics) Jesus, this “Resurrection of Ra’s al Ghul” story is still going on? While there’s no cover dress, this is officially the epilogue for the event, according to the title page, and it features Batman, Ra’s and, as writer Paul Dini has Batman put it, “Of course. More ninjas.”

Luckily it also features the art work of Dustin Nguyen and Derek Fridolfs, who I assume are planning to stick around a bit (The credit box says that “Writer Paul Dini welcomes the new art team of…to Detective Comics!”) They’re a very welcome addition. Not only is this the first chapter of the crossover that I’ve read which actually looks like it was drawn by a professional comic book artist, it’s easily the best looking issue of TEC since Dini’s first, in which J.H. Williams III showed us how good Dini’s run could have been.

Dini himself seems to have gotten his groove back too, after the haphazard “Resurrection” and Countdown tie-ins of the past few months. First, he introduces a fantastic new member of Batman’s rogue’s gallery, one who meets the bare minimum requirements for Batman villainy (mental hook reflected by his bizarre physical appearance), before plunging Batman and Ra’s into a potentially interesting new status quo, one which abruptly ends when Batman dishes out one hardcore cruel and unusual punishment.

It’s the kind of complex resolution to the threat of a deadly enemy that I really like to see Batman and his Justice League companions having to resort to. In a way, it seems so much worse than just killing Ra’s, but Batman has that often insane respect for human life that leads him to put adversaries in what he he himself regards as living hells to avoid breaking his word to himself.

If the new art team is indeed here to stay, and Dini can get back to such tightly-constructed done-in-ones featuring new and old villains, then it looks like his TEC could be headed for a second wind.


Justice League Unlimited #41 (DC) Wow, I really enjoyed this issue; probably more than any issue of this series I’ve read since The Question one. Grace Randolph is responsible for the script, and there’s literally something funny on every page. It basically reads like the Joker and Harley Quinn from the old Batman: The Animated Series invading the JLU cartoon, which, incidentally, is the very plot here.

The Joker’s anniversary with Batman (um, of their first meeting) is coming up, and Mr. J’s down in the dumps because Batman’s spending all his time with the Justice League rather than fighting him. So he and Harley invade the Watchtower to ready a surprise gift for Batman, and find themselves contending with the third-stringers on monitor duty (Zatanna, Elongated Man, costume-less Hawkgirl and The Crimson Avenger, who got next to no screen time on the cartoon and little more panel time in this series).

The look inside Batman’s quarters, Harley’s gun draw-off with Crimson Avenger, moustrap pie, the line “If I get punched in the face one more time today…”—this was honestly the best comic I read this week and, frankly, I’m as surprised as anyone. Bravo, Randolph. 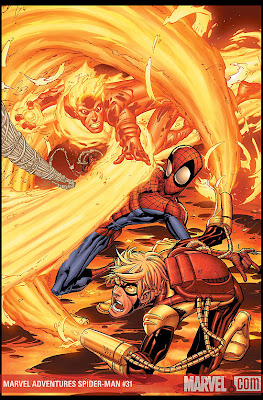 Marvel Adventures Spider-Man Vol. 8: Forces of Nature (Marvel Comics) So here’s Exhibit L in the case against the “One More Day” Spider-Man reboot—an insanely low-priced trade collecting pretty good Spidey stories featuring young, unmarried, unlucky everykid Peter Parker, written by Peter “The Same Guy Who Was Writing One of the Marvel Universe Spider-Man Comics” David. The four stories in this volume are all illustrated by David’s Spyboy collaborator Pop Mhan, whom I understand can be a bit of an acquired taste, although I’ve always personally loved it.

Like the last David-written MA Spider-Man trade I tried, Vol. 5: Monsters on the Prowl, this one features four individual, unrelated stories which are nevertheless unified under a certain theme. The Monsters trade had Spidey crossing paths with famous Marvel monsters. Here, he does battle with villains who each represent one of the four elements: There’s Grey Gargoyle, Whirlwind, Pyro (guest-starring the Human Torch) and Hydro-Man.

All four are pretty tightly constructed, with David managing a beginning, middle and end, with a bit of a moral or at least punchline to each. I know a lot of hardcore Marvel fans complain these stories are watered down, but honestly, I’m not seeing it. Sure, a lot of David’s puns and jokes are terrible, but that’s just David—a lot of his puns and jokes are always terrible. That’s the price of making so many of them; they’re not always going to hit.

And the groaners are well worth suffering through for scenes like Spider-Man’s inadvertent (but complete) destruction of J. Jonah Jameson’s moustache, or the latest installment of the Spider-Man/Human Torch rivalry, my second favorite relationship in all of Marvel Comics.


Metal Men #5 (DC) With this issue, we pass the half-way point of Duncan Rouleau’s eight-part reinvention of The Metal Men and steam into the back half of the series. This is also, incidentally, where we get a stretch of exposition regarding just what the hell’s been going on throughout this super-confusing series. As I’ve said before—maybe as many as four times before, actually—this is the good kind of super-confusing, with so much going on that the panels are bursting at the borders with crazy ideas and fun images. Is it too much at times? Hell yeah it is, but, with this issue, I think it’s finally starting to make sense. This will definitely read better in trade, if you’re more patient than I. Me, I look at a comic and see the Metal Men forming vehicles together, and I just can’t help but buy that sucker. 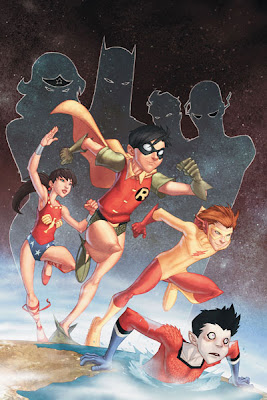 Teen Titans: Year One (DC) Let’s get this out of the way first: Yes, Dick “Robin” Grayson and Kid “Wally West” Flash totally instant message each other in this issue. I understand this might blow a few minds, given that the Teen Titans’ real year one was in the 1960s. And even accounting for DC’s sliding timeline, the Teen Titans formed seven years before Zero Hour, which was at least one year ago (“One Year Later”), but probably more. However, time is broken, Superboy punches, “New Earth” blah blah blah. Whatever, the bottom line is the original Teen Titans would have formed long before teenagers were carrying cell phones and IM-ing each other.

Personally, I don’t really care, but I wanted to point this out because it’s something that is likely to irritate some fans (I believe Peter David did something similar a few years back by having a girl Spider-Man went to high school with having a blog), or at least knock them out of the story long enough to think about the time line a bit, and it’s soooo easy to avoid. If you’re dealing with a superhero story set in the past, just don’t focus on the specifics of the technology. The scene of speedster Kid Flash impatiently waiting for Robin to respond to an “instant” message is amusing, but there are other ways around it, and, ultimately, it causes more problems than it’s worth. Besides; they’re super-people—have ‘em communicating through the monitors of their computers or on futuristic radios or something; no need to specifically date them with every day technology.

Anyway, like I said, I personally don’t really care. And the reason why is because Karl Kerschl is illustrating this story, and he is illustrating the hell out of it. Amy Wolfram’s script could have consisted of 22 pages of the Titans viciously slandering me personally and I would have still enjoyed the hell out of this—that’s how good Kerschl is. (He shares are credits with Serge LaPointe and Steph Peru; I’m assuming at least one of them is responsible for the colors, which are lush, textured and reminiscent of a cell from a high production value 2D animated film).

His designs for the Titans—Robin, Kid Flash, Wonder Girl and Aqualad—are all absolutely perfect. They look like teenagers, and their clothes all look and act like real clothing. They’re the exact ones they originally wore in the ‘60s, and they do look a bit goofy, but in a charming way. Robin’s clothes, for example, look a tad silly, but silly in the way a kid might think looks cool. And that’s perfect.

Wolfram’s script is, for the most part, fine. She’s not just rehashing the battle against Mr. Twister, and gives us a bit of a mystery, with Batman not acting quite right. Most of the issue is spent on Robin and Kid Flash, with a scene apiece devoted to Wonder Girl and Aqualad.

Garth looks…fishier than usual, which is kind of cool. Wonder Girl is wandering NYC in search of her sister. This is probably a bit of a retcon of her origin—between Crisis on Infinite Earths and Infinite Crisis, Wonder Girl debuted before Wonder Woman, but that was changed with the 52 #52 rejiggering—but I’ve completely lost any sense of what Wonder Girl’s origin is at this point anyway, so I don’t mind a bit. As long as she does the frug at some point in this series, I’m cool with whatever Wolfram and Kerschl do with her origin. It will likely be changed in the regularly scheduled, bi-annual Wonder Girl retcon anyway.

The last two pages of the issue are devoted to a story set “elsewhere…” told in narration boxes with quoation marks, featuring some fish and using an asterisk in a way I don’t understand. I don’t get the last two pages at all, to be perfectly honest. But it hardly matters because Karl Kerschl is so good.
Posted by Caleb at 8:20 PM

I haven't read "Teen Titans: Year One" yet, so bear with me. But is it text messaging or instant messaging? Because I was IM'ing with friends when I was a freshman in college, which was (showing my age) 12 years ago. And I wasn't even the most techno-savvy teen, so it's possible that people were IM'ing even earlier than that. I mean, if we're dealing with "The Teen Titans formed in the 1960s" then of course their IM'ing is ridiculous, but if they formed 7 years before Zero Hour and in DC-time ZH was 5 or fewer years ago, then it is possible.

I loved the way aquatic telepathy was shown as Morse Code in the Atlantis scenes, very cool. And little Garth looked a bit...Lovecraftian. I've renamed him Garthulu.

I'm pretty much a luddite, and had never IM-ed until 2000 (like, twice), so yeah, I see it's actually fine on the official(-ish) DC timeline. The DC timeline in my head makes the characters a lot older than DC wants us to think of 'em, I think (like, I always assume the original Titans are at least a few years older than me, and now that I'm 30 that makes them early to mid-thirties).

I didn't figure out the last panel with the telepathy and asterisk until my second reading. It is pretty cool; just a little unclear what the asterisk is connected to.