Some things I noticed about Action Comics Weekly #602 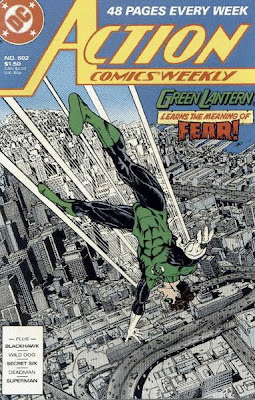 That George Perez character, a real good drawer, was a real good drawer back in 1988, too. Goodness, look at this swell cover. Coast City isn't even a real city, but the way Perez drew it, with, like, every single building and car in this fictional city appearing on this cover, it looks more real than most 21st century comic book appearances of New York City. 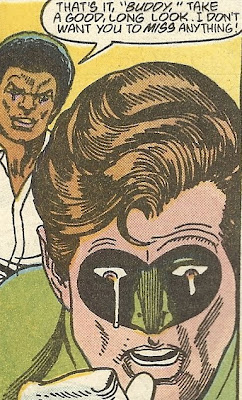 Maybe John Stewart's just in shock, having just come home to find his wife murdered by the insane, possessed-by-an-alien-gem ex-girlfriend of the guy who's been freeloading at his apartment for a while, but he sure talks awfully callously about his dead wife.

When Jordan flies back to Stewart's, he finds Katma dead, and Stewart standing there, tapping his foot and berating Ha, as if Hal had come home drunk, cooked a bunch of omelettes and then left the kitchen a mess. Stewart refers to his wife as "hacked to pieces" and, when Jordan suggest they, like, call the police or something to report the murder, Stewart responds, "Too late for help, m'man. The lady's dead."

After enduring Stewart's three-page rant, a rant that's that's part exposition, part complaining about the whole getting-his-wife-killed thing, Jordan decides he needs to get out of that apartment. To which Stewart responds:

Jeez. I know everyone deals with grief differently, but Stewart deals with it weirdly. 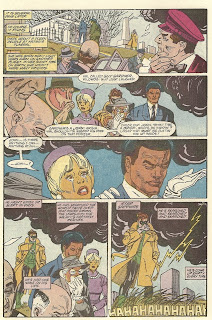 Stewart must have eventually gotten sick of the smell himself and called the police and the funeral home and got everything straightened out enough to have a memorial service at the cemetery. Despite feeling guilty about/being blamed for Katma's death, Jordan shows up. Not wearing a nice suit, of course, but in full superhero costume, complete with his mask and, perhaps in some sort of weird gesture in the direction of etiquette, a trench coat over his costume. 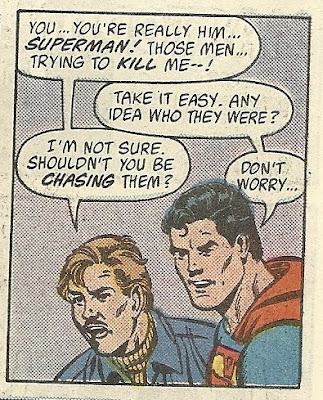 My favorite part of this issue's Roger Stern/Curt Swan/John Beatty two-page Superman strip is the way the Man of Steel sort of lingers for a few panels, making sure the guy he just saved from a hail of gunfire is okay.

Superman's pretty relaxed about having to chase down a carload of fleeing crooks, to the point that the victim is questioning why Superman hasn't flown off yet. Superman's not worried though, what with his super-senses and super-speed. He probably has time to run a few errands and go make a sandwich and still have time to catch normal human bad guys driving away in an automobile. 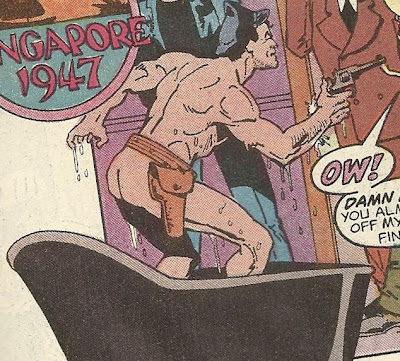 Once again, the highlight of the issue was the Mike Grell/Rick Burchett/Pablo Marcos Blackhawk strip. Above is a detail of the very first panel. It is followed by about four pages of Blackhawk brawling with a bunch of dudes while wearing nothing but his gunbelt and a day's stubble. 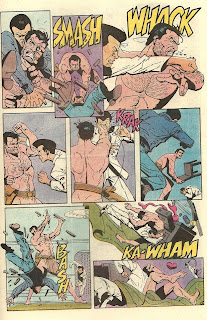 There's a lot to like about the scene, from the crisp action to the way Burchett hides our hero's penis to the "Well, you don't see a naked guy beating up a roomfull of men in the pages of Action Comics very often" nature of it. But reading it in 2010, I was particularly struck by the fact that this is the sort of thing you see happen to superheroines rather frequently—the same day I read this I read a trade in which Misty Knight went right from a shower scene to a fight scene—but superheroes rarely engage in fisticuffs in the buff.
Posted by Caleb at 5:50 PM

The Grell Blackhawk was an impossible attempt to bring some of the energy of the Chaykin miniseries to a regular strip. An honorable failure.
Not the Jim Owsley GL strip, though. How wrong can you get these characters? Granted, John Stewart just keeps getting reinterpreted - from streetwise guy to cerebral architect to ex-Marine soldier boy - but the thieving Hal Jordan (no matter who those diamonds belonged to, it sure wasn't him) was a new one.

On Stewart's reaction, blaming Hal is pretty appropriate at this stage. Not only was it Hal's ex-girlfriend who killed his wife, the only reason he and his wife didn't have their rings is because Hal had recently blown up the central power battery and destroyed the GLC (not for the last time!).

And don't you love how Arisia is dressed like Jackie Kennedy? Underage Pixie Chick Green Lantern has style!

Yeah, the GL strip in Action Comics was pretty much all bad. The diamond thing really irked me too. Hal has a ring that could take a lump of coal and turn it into a diamond, but instead he goes to another foriegn country and steals one from a South African mine.

This was during the waning days of apartheid, so I know what Owsley was going for--"Let's stick it to the evil foriegn power doing evil things", but it also sends the message that its okay to steal from people we hate or don't agree with. Grrrr.

I kind of like forget that arc ever happened.

And don't you love how Arisia is dressed like Jackie Kennedy?

Yeah, another alien better dressed for a funeral on Hal's home planet than Hal. Couldn't he have asked his girlfriend (they were dating, right?), "Hey honey, does this trenchcoat over my spandex costume with mask look okay for a funeral?"

Yeah, that seemed more like The Joker than A Jerk to me too. I wasn't reading back then though, so I just assumed that maybe Guy was soulless and evil when first introduced...?

Thinking about it (too much...) there is a type of trenchcoat unique to comics that - no matter if you are a scary rock monster, god of cosmic evil or just an unshaved space cop with a magic ring - makes your compleately unnoticable.

Hal probably picked up one of those coats and figured no one would even notice him there.

Guy and Hal didn't get along. We don't know what Guy was laughing at. While he was more of a sociopath at that time period.. he had suffered severe head trauma,it doesn't really fit that he would just laugh at her death. Could have been him laughing at the idea that he would come to the funeral. He was never close to John or Katma. Kilowog and Arisia eventually got to know him better, in any case. Heck, maybe Hal made up the story that he called Guy and Guy laughed to take some of the heat off himself.