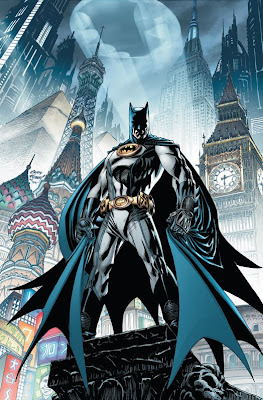 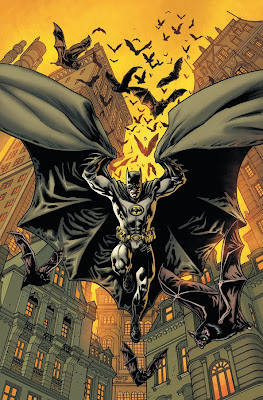 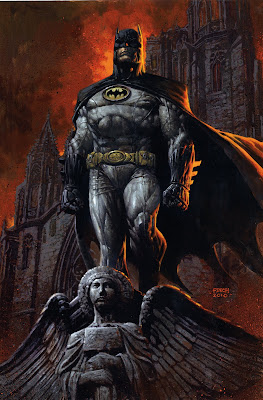 Batman's costume changes fairly frequently, but the changes are usually very small ones. This is probably the most drastic change since Jean-Paul Valley temporarily became Batman in the '90s and, honestly, I think I may have liked that costume better (the first one, with the Black Panther-style cowl...although I coulda done without the utility garter, which JPV has since passed on to Stephanie Brown) better than the one above.

I don't much care for the piping on the new costume, which helps make it look very costume-y. "My" Batman—the one I was reading when I started reading Batman comics—always tried to pretend to be a supernatural, creature of the night in order to frighten the cowardly and superstitious criminals. The piping really calls attention to the fact that he's a man in a suit.

Worse still is the ribbing, which you can see most clearly in the first image, which marks it as a Bryan Hitch, Ultimates-inspired look. In other words, the costume looks more like 2001 than 2011.

But the worse bit? The second Bat-symbol on the belt-buckle. That's...that's just a crime right there, calling to mind Superman's Superman Returns costume, which similarly featured an echoing symbol on the belt buckle.

Batman is, like Superman, one of the most literally iconic superheroes. Literally. Their costumes are defined by the icons on their chests. Much of the rest of it is merely detail (Well, in Superman's case; Batman is a shape or silhouette plus a chest-mounted icon). I can think of nothing more superfluous on a Batman costume than a second Bat-symbol.

Finally, is it just me, or does this costume look an awful lot like Gary Frank's design for the Earth One Batman? Or the one from the Arkham Asylum video game?

Oh well. I suppose it's possible that it will grow on me the longer I look at it. Or maybe the Bat-artists will all just draw Batman in silhouette, wrapped in his cape or from the neck up in the Batman comics I read in the near future.

The above images are, by the way, the covers of Batman, Inc. #1 and Batman: The Dark Knight #1, and are penciled by Andy Kubert, Yanick Paquette and David Finch, respectively
Posted by Caleb at 3:15 PM

I like it as drawn by Yanick Paquette, Caleb. But, then, pretty much anything drawn by Paquette will look awesome.

Also, I can't wait for your commentary on the news of the new Batman: The Brave and the Bold series for DC's kids line of comics, to be drawn by Rich Burchett.

Here's the link, in case you haven't read it yet:
http://dcu.blog.dccomics.com/2010/08/11/brace-yourself-for-the-all-new-batman-the-brave-and-the-bold-series/

Hey James! Thanks for the heads up, but yes, I did indeed here the news regarding the non-cancelation cancelation of DC's best book with the words "Brave," "Bold," "And" and "The" in the title.

I won't really be talking about it here though, as I'm working on something related to the new all-new B:TBatB series for Newsarama. I'll post a link when it's ready.

The JPV Batman costume was not only NOT terrible, It's one of the best costume designs I've ever seen, still to this day. Sorry dude, you smokin' crack.
I gotta agree with you on that double emblem batsuit, though. That's everything I hate about every Batman movie costume, wrapped up into one big turd. Oh well, since I can't stomach all the awful things Morrison is doing to ruin the Bat Continuity I'll rarely have to see that awful costume in print.

That costume is so clearly inspired by Ultimate Cap that Bryan Hitch should get an artist credit.

I'm curious who designed it. I know Morrison himself provides a lot of design ideas, but I don't know if DC would let him have a hand in redesigning a costume for one of their most iconic characters.

Considering that Morrison's going to be writing a comic called Batman Inc., it doesn't surprise me that the costume looks more costume-y.

I'm right behind you Caleb, this costume is a proper clunker. It's a sop for those dreary souls for whom every costume in comics has to be relatable to the real world.

"Finally, is it just me, or does this costume look an awful lot like Gary Frank's design for the Earth One Batman?"

Not just you. I noticed it after the Batman Inc. cover was released. Thought maybe I was just misremembering, but then googled the Frank one. I've seen others online make similar comments. I also thought that the Frank design looked more 2001 Hitch than a 2010 Frank.

On their own, the details that you are criticizing probably aren't a big deal, but together, they make the Batsuit look way to busy, IMO.

What stands out the most to me with this costume is the fact that his underwear his the same colour as his tights and top.

Oddly enough, not appearing to wear one's underwear on the outside kind of calls more attention to that area.

"I'm Batman. Check out my crotch."