Some things I noticed about Action Comics Weekly #603 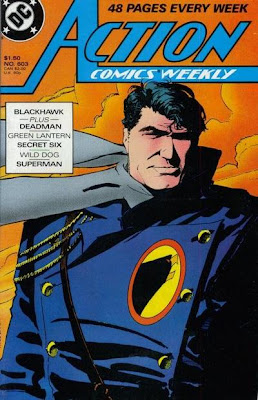 Continuing my post-some-scans-and-vomit-out-a-few-sentences "reviews" of various issues of DC's 1988 experiment with a weekly anthology, all of which I secured from a fifty-cent bin in a used book store! Wait, that's not even a complete sentence... See! Vomit!

Today we look at ACW #603, featuring a nice Blackhawk cover by...who would you guess that is? A young Michael Lark? David Mazzuchelli? Gabriel Hardman's dad? No, that's the work of Kyle Baker, circa 1988! It's quite subdued, too. Baker draws a Phantom Stranger strip a few issues down the line here, and that is much more Kyle Baker-y looking than this Blackhawk piece.

As usual, James Owsley and Gil Kane's Green Lantern strip remains the most hilarious feature in the book. In this particular installment, both Hal Jordan and his ring seem to be starting to run out of steam. Carol Ferris, his ex-girlfriend who is also an insane supervillain with a power gem similar to his ring, ambushes him and destroys part of a sky scraper. He tries to defend himself and put the skyscraper back together, and is soon pretty much wiped out (he himself isn't sure if his ring charge is running out or he's just too mentally exhausted to use it properly).

So once he disarms Carol, he realizes he has to "handle Carol...the old-fashioned way." Which way is that, Hal? 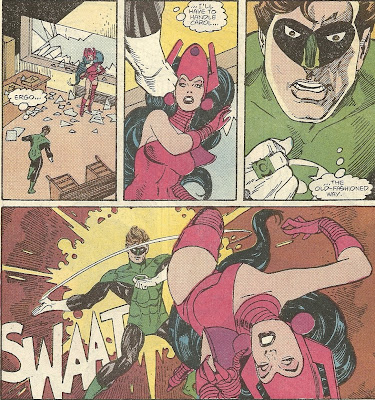 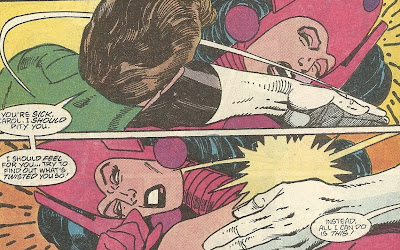 So, um, this is the issue where Hal Jordan slaps Carol Ferris around.

Serious discussion question time. When Hal decides he must fight Carol hand-to-hand, she slaps her a couple of times and she's down for the count. Would it be more or less offensive if Hal hit her with his fists? I'm sure the thought was that Hal punching her would have seemed a lot more brutal, but since they were going so far as to have him repeatedly hitting Carol anyway, why not just have him punch her? By not punching her, it seems to imply that she's not his physical equal, you know?

Anyway, it's a scene of a superhero knocking a woman around, so I'm not sure how much better or worse tinkering with it i n either direction would have mattered. It just sort of bothered me that he was fighting her a) at all and b) fighter her differently than he would fight a man.

Oh, and if you're wondering who "won" this fight (I put "won" in quotes because I just re-watched Roadhouse, and as Dalton says, no one ever really wins a fight), here's what happens next. Hal points his ring at Carol and thinks about killing her, but he can't make it happen ("Maybe...I'm to exhausted...or, maybe the ring needs charging..."). (By the way, I thought GL rings didn't allow the use of lethal force...?) Then the cops come in and tell GL to put his hands up ("Wha--? Police?!"), giving Carol the distraction she needs to summon her gemstone and blast Hal to the ground with purple lightning. The tables have turned! Is this the end of Hal Jordan?! We won't know until we read Action Comics #604! (Spolier: It is not the end of Hal Jordan).


I haven't mentioned the Wild Dog strip in a while, but there's this radical censorship group called the National Legion of Morality that's been making a fuss in The Quad Cities. In the last issue, they protested a magazine book store called Readworld for selling immoral publications like Playboy, Vogue, Ms Psychology Today.

The night after the League's protest, there was an explosion and Readworld, and it burned to the ground. Here is part of the news report, in which League leader Dr. Layman stares at the burning ruins: 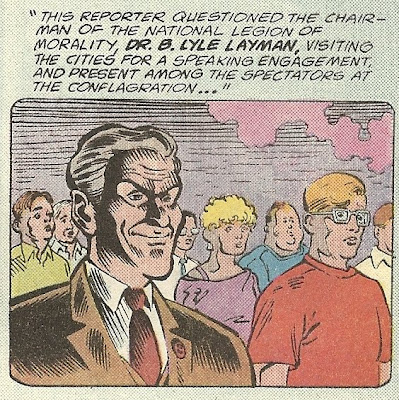 Based solely on his appearance in this panel, you don't think he might have had something to do with the fire, do you? 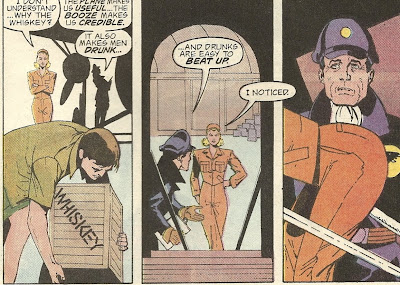 It's notable because it doesn't feature our hero ogling his partner in this endeavor, which he has quite aggressively, even piggishly done constantly since they first met. Here only the reader ogles her, as Blackhawk is too busy rolling his eyes over her calling him an easy-to-beat-up drunk.


Finally, this was a name I was surprised to see in the letter column: 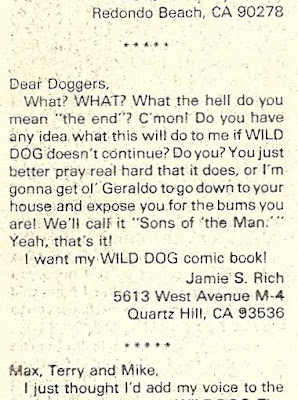 That couldn't possibly be the same Jamie S. Rich who used to be an editor at Oni Press, and has since become a prose author and comics writer?

Hey! Some DC folks were just talking about the possibility of a new Wild Dog series at this past weekend's Baltimore convention! I guess in the DC Nation panel, someone requested a new Wild Dog series and writer Sterling Gates, according to Comic Book Resources, referred to it is Senior Story Editor Ian Sattler's "dream project," and, according to Newsarama, Sattler said "You'd all read Wild Dog if we did it and it was super, upsettingly violent, right?"

So a new Wild Dog is on DC's radar! And comic book writer Jamie S. Rich used to be a big fan of Wild Dog! DC should totally hire Rich to write a new Wild Dog! And they should have a regular Rich collaborator like Joelle Jones, Marc Ellerby or maybe Chynna Clugston or Andi Watson. I'm pretty sure that would lead to the best possible Wild Dog comic—the Wild Dog comic you never would have expected.
Posted by Caleb at 6:29 AM

What would be less trouble is Green Lantern FIGHTING Star Sapphire. Instead we get Hal Jordan beating up Carrol Ferris. There is a world of difference there.

Have DC give me a call. Some hard crime stuff is right up my alley.

Blackhawk looks just like Patrick Warburton on that cover! And here I always thought that Charlie Sheen was the perfect man to play Chaykin-era Blackhawk!

I miss /Wild Dog/ too. If they bring it back, it has to be Terry Beatty on pencils and John Workman on letters. There was a /Wild Dog Special/ with Tim Harkins lettering, and while it was OK lettering, it just wasn’t /Wild Dog/. And if Workman uses a font, it has to have proper bold italics. Not like in /Turf/, where he just made one font and then obliqued it.