And she calls herself a superhero... 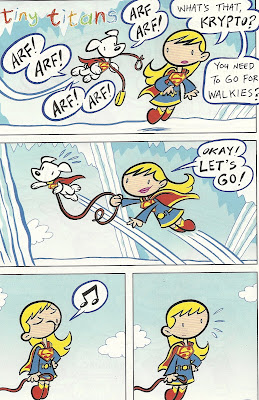 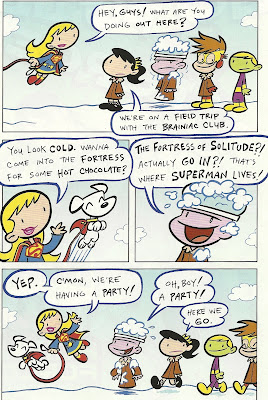 You'll note that at no time during this scene does Supergirl produce a plastic bag to clean up the result of Krypto needing to go walkies, the thing that Krypto is most certainly doing off-panel at the bottom of the first page, while Supergirl is whistling.

Actually, there are a few possible scenarios which might help justify Supergirl's inconsiderate, un-heroic behavior here.

First, she and Krypto have gone for a walk just outside the Fortress of Solitude, near the North Pole. As the name of the Fortress of Solitude implies, it doesn't get a lot of visitors, and the people we know hang out there from this comic—Supergirl, Superboy, Superman, Superboy's Bizarro clone Match, even a visiting Lex Luthor—all fly rather than walk, making it impossible for them to step in the likely result of Krypto needing to go walkies.

Yeah, Psimon, Wonder Girl and Kid Flash are shown walking through the Arctic Circle there, on a field trip with the Brainiac Club, but there visit is an unexpected and highly unusual one, as you can see from Supergirl's reaction.

Second, it's possible that Krypto disposes of his own waste, by disintegrating it with a blast of his heat vision. No, we're not actually shown that happening, but we're not shown what Krypto's doing off-panel at all, so it's certainly possible.

Third, I don't really know how Krypto's digestive system works, and am just assuming it works just like an Earth dog's. If Kryptonian dog biology is similar to Kryptonian humanoid biology in Earth's yellow sun, perhaps Krypto doesn't eat dog food and produce waste similar to that of terrestrial dogs. Maybe he's actually just a living solar battery, and just occasionally vents steam or something as a waste product. Maybe Supergirl is just floating there whistling while Krypto is sniffing a pile of ice, which is what he does when he goes on walkies.

This concludes my seven-paragraph post about a dog going to the bathroom off-panel in a gag comic for kids.

(The above pages are taken from DC Comics' Tiny Titans #31, by Art Baltazar and Franco)
Posted by Caleb at 6:03 AM

What? Krypto could just be peeing!

1. Just needed to write his name in the snow. My dog does this a lot.

2. Poop is hot and steamy when it comes out. Probably just melted right through the snow.

Supergirl just has the Fortress Robots clean it up. She's a spoiled brat.