James Robinson makes his debut as an artist! 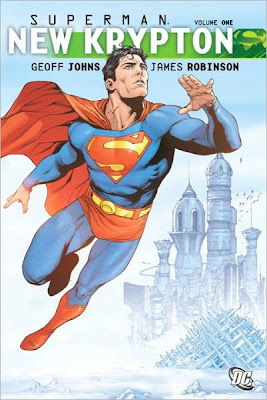 At least, that's what I gather from the cover of this 2008 hardcover collection of some Superman comics.

How is Robinson's artwork? Surprisingly good! He has a versatile, almost chameleonic style, that shifts from story to story. Sometimes his work looks remarkably like Pete Woods' or Renato Guedes'; other times it looks exactly like that of Jesus Merino or Gary Frank.

Okay I'm just being an ass, as is my wont. Robinson and Johns wrote the majority of the contents of this collection (Sterling Gates wrote a little too), and either because Robinson and Johns were the big "stars" associated with the book or/and because there were so many different artists (seven different pencilers), they only credited the writers on the cover.

The trade paperback version adds Gary Frank's name to the cover as well: 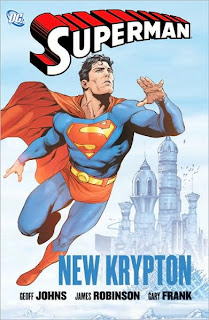 I grabbed this copy from a library shelf, thinking I'd catch up on the Superman: The World of New Krypton limited series, the 12-issue about Superman living on New Krypton while his Mon-El starred in Superman and the latest versions of Flamebird and Nightwing starred in Action Comics for about a year.

The first book collected here is Superman's Pal, Jimmy Olsen Special #1 by Robinson, Merino and four other artists, which I had actually already read, but I figured I'd reread it on my way through the rest of the story. I got to the third panel on page four when I completely lost interest: 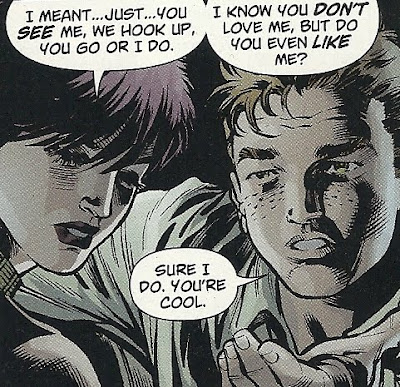 That's part of a conversation in which Jimmy Olsen's nameless girlfriend dumps him, informing him that she's moving to Midway City. His response is simply, "Oh."

Like I said, I read this story before, having bought the single issue version, so I guess I read this scene, but for whatever reason, the soul-crushing sadness of it didn't strike me so hard the first time around (Perhaps I was just less depressed in general about the state of Superman comics, DC comics, James Robinson's writing, super-comics in general, whatever back then).

I have a hard time thinking of a thought more dismal than that of Superman's Pal, Jimmy Olsen joylessly fucking some nameless girl he doesn't even like while she similarly uses him until she can't stand it any longer.

I put the book down for a couple days, and then tried again, making it through the rest of that particular comic's worth of story before hitting the second comic's worth of story and realizing I had read that too (Adventure Comics Special Featuring the Guardian #1). As it turns out, I've actually read everything collected here—in addition to the two comics previously mentioned, it also includes Superman: New Krypton Special #1, Superman #681 and Action Comics #871—and had no desire to reread it.

There's no single panel that suggests the dreariness of the one I posted above, but the book is a series of down notes with brief flashes of paranoia, obscure characters reappearing in unexpected ways and some fantasy xenophobia that more often than not comes across as silly.

I guess maybe World of New Krypton material I was interested in checking out is included in Superman: New Krypton Vols. 2-3...?

Well, that will teach me to take a collected edition home from the library without first thoroughly flipping through it. Now if you'll excuse me, I have to go reread a few random pages from Showcase Presents: The Superman Family to stave off my melancholy...
Posted by Caleb at 8:13 PM

See now Caleb, if you read more Green Lantern, you would be filled with...joy! Hal bones women too, and can't always remember their names, but at least he always has a good time.

And so do they.