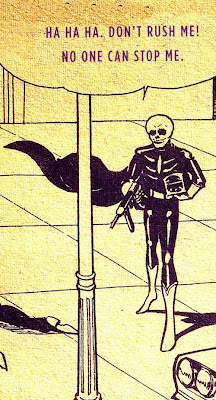 Here's a post I made at Blog@Newsarama in December 2008, asking Batman group editor Mike Marts to please think about integrating some of the awesome villains that appeared in the Batman manga of Jiro Kuwata that got collected in Bat-Manga!: The Secret History of Batman in Japan:

A master villain with a skull mask that cannot be removed who goes around in a skeleton costume he accessorizes with a cape and kicky boots, L.D.M.’s shtick is that he can die and return to life at will. Not a bad superpower really, as it allows him to be executed for his crimes repeatedly, or commit suicide to escape capture, and then crawl free from his grave later.

And here's the just-released solicitation info for the December-shipping Batman, Inc. #2:

The dynamic new era of Batman continues! The Dark Knight and Mr. Unknown – the Batman of Japan – go up against Lord Death Man. It’s going to be a fight to the end that could see the failure of Batman, Inc. before it’s even begun!

Lord Death Man, heh?
So he's like a mix between Black Mask and Xombi?